Poor Colin Baker. His tenure as the Sixth Doctor was a troubled time for the show, and as such, Trial of a Time Lord was his last series, following a hiatus which made fans blow several gaskets. If Twitter had been around in the 1980s, it would’ve consisted mainly of capital letters.
Let’s face it: Doctor Who can sometimes be a bit pants, and Trial of a Time Lord is no exception. If this feels too negative for the DWC, come back tomorrow because we’ll be looking at what really worked for the season.
But for now, drag your heels as we revisit this 14-part epic… For several years before actually watching Trial of a Time Lord, I was under the impression that this four-part opener was generally considered the best section of the Doctor’s court room drama. Once I saw The Mysterious Planet, this didn’t bode well for the rest of the season. Because apart from the stuff on the space station, it’s a mess.
The idea is there, but the execution begs to be executed.
We’re used to the Doctor running up and down corridors, but these are dark ones – especially the underground station bit, trying to be reminiscent of The Web of Fear; instead ending up like spending a tube journey where the power goes off and you end up with the local nutter chatting to you about aliens stealing the planet.
This is Doctor Who, so robots bumble about and just aren’t functional. For anyone living in the West country, the one in question – Drathro – will bring on nightmares of watching Jethro. Ooh-arr. Michael Jayston played him beautifully, but the Valeyard is an utter mess.
What is he supposed to be? You get uncertain terms, mutterings about him being the dark persona of the Doctor, somewhere between his twelfth and final incarnations. What does that mean, exactly? The Doctor is dark anyway: he can be careless, irresponsible, and darn right threatening. He murders and he fashions others into murderers too. What does the Valeyard do that makes him so much worse?
I can forgive all that because he is an interesting idea, and as I say, he’s portrayed brilliantly. The thing I can’t get over is how the internet fandom had adopted him.
Whenever regeneration is mentioned, someone pipes up, “maybe this is where the Valeyard comes from” or “we’ll probably see the Valeyard again when the Doctor changes”. However you feel about him, we likely won’t see him again. I place the same odds on the return of the Chumblies, the Rani, and the Macra – oh no, wait, not that last one… Vengeance on Varos isn’t half as blindingly brilliant as some will have you believe, desite being filled with glorious ideas and wonderful visuals. It’s far from bad, but equally, its pace is too slow to be considered an instant masterpiece.
The one thing that did work well was Sil the Mentor. Bringing him back for Mindwarp should’ve been great, and he is. So too is Kiv, an elder Mentor who Sil gets to grovel to. Lovely. Except there’s this nutty brain-swapping procedure. Peri gets her head shaved for… reasons. Nonetheless, that part of it works.
What doesn’t is – well, all the rest. Much as I love Brian Blessed, I just don’t get him or his werewolf pal. It’s like a pantomime where the tone jumps one way to the other. It doesn’t help that it’s another serial about running down dark metal corridors, just as The Mysterious Planet was. There are good ideas hidden away in Trial of a Time Lord, but they don’t quite work because its structure is too strange. Its ambition was something akin to the Key to Time season, but expanding the last episode of The War Games (essentially) and basically referencing the real-life turbulence rocking the series was a mistake.
Still, if they pulled off telling three stories of past, present, and future well, it could’ve worked – even with the odd amendment that is The Ultimate Foe.
It makes for a season where no one quite knows what’s real and what’s not, where death doesn’t always mean death, where the Doctor soon gets over the supposed demise of Peri because the story dictates he moves onto Mel.
To Time Lords, “past, present, and future” is a messy thing. The attempt is solid, especially being introduced to Mel before the Doctor meets her. But because of The Mysterious Planet, we never get a “past” instalment – this should’ve been a serial set in a recognised era of history, but instead, the concept never gets going.

Terror of the Vervoids A murder mystery in space should work… and it largely does. I’m not sure the mystery elements fully pull off their potential (you don’t have to be an Agatha Christie enthusiast to suspect the wrongdoers); still, that’s the part that works best for Terror of the Vervoids.
Whether you think the Vervoids look rude or not, they’re not the worst part of this serial either. Nor is the courtroom sections, which here start to really drag; nor the Doctor’s defence making no sense whatsoever. What’s the worst thing? You might say, “Mel”, but she’s pretty good here.
No, the worst thing is some of the dialogue and the narrative plot holes/chasms that stop this from being remembered as a solid classic and the best part of Trial of a Time Lord.
You can see Pip and Jane Baker were trying for humour – “Whoever’s been dumped in there has been pulverised into fragments and sent floating into space, and in my book, that’s murder” – but it was a stumbling approach that doesn’t pay off.
Although, when the Valeyard says, “Are we to be subjected to more chicanery, Sagacity?”, I can’t help but recall Donna saying “I like the cut of your jib, chin-chin!” in The Unicorn and the Wasp. Fitting, don’t you think? 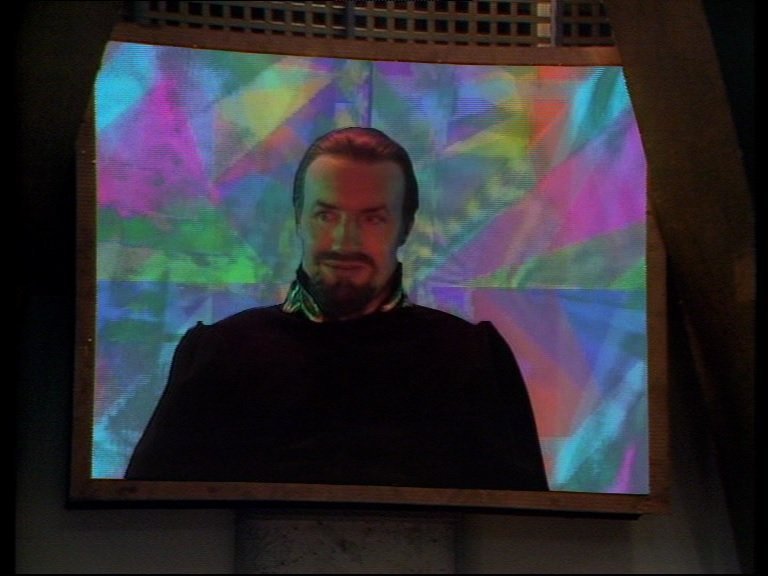 Even if you’re not Chris Chibnall and you actively enjoy Trial of a Time Lord, it’s tinged with sadness, for two reasons.
The first is that it’s Colin Baker’s last story as the Sixth Doctor. We all know he shouldn’t have taken the blame for the show’s dwindling reputation; it was far more complicated than that, and Baker was the scapegoat. He felt so irked – rightly so, I might add – that he refused to return for his regeneration scene: now that The Night of the Doctor and The Day of the Doctor have both come and gone, he’s the only incarnation of the Doctor not to film his passing over the reins. It’s said that all humans wear a curly wig at some point in their life, and it was time for Sylvester McCoy to follow that rite of passage.
The second “last” is even more upsetting (no disrespect to Colin). The Ultimate Foe is the last work of the great Robert Holmes.
In 1986, Holmes grew seriously ill, and though he wrote The Mysterious Planet for the season (and he was due to contribute Yellow Fever, and How To Cure It for Season 23), he passed away before he could complete his script for The Ultimate Foe.
With that, we lost one of the best TV writers of all time. Holmes wrote some truly stellar Doctor Who: Spearhead from Space; The Ark in Space; The Brain of Morbius; The Caves of Androzani, to name but a few. The Ultimate Foe is far from his strongest achievement.
It’s not fair, either, to solely blame Pip and Jane Baker, who completed the story. But it’s trying to be a sequel to The Deadly Assassin, and any story attempting that is doomed to fail – even with Holmes the original creative driving force.
It’s an exploration of the Matrix Databank, a place most people don’t really understand anyway, which can look like pretty much anything. It’s a bit of a mess, but it could’ve been so much stronger.
The original ending, for instance, would’ve been cooler, and solved the problem of the Sixth Doctor’s regeneration: it would’ve had the Doctor and Valeyard trapped in a final struggle to the death. Lovely. A bit downbeat? Yes, okay, but this was a downbeat time for the show.
It was certainly preferable to “carrot juice, carrot juice, carrot juice”…
We end on a downbeat tone. But this is the DWC, so come back tomorrow: we’ll be looking at 7 fantastic things about Trial of a Time Lord.

by Philip Bates time to read: 6 min
Features Elegy For A Flat Cap: Peter Sallis Remembered
Features Here's What The Doctor Who Companion Thought …
31
%d bloggers like this: