Travel back in time with me. The year is 2012, and Amy and Rory had just left the TARDIS. Clara Oswald was a few months away from her appearance in The Snowmen. And Matt Smith, the Eleventh Doctor himself, first visited Cardiff’s Doctor Who Experience in October 2012, unveiling new exhibits, chatting to the press, and just generally being a nice guy.
Go to the Doctor Who Experience now and you’ll see Matt’s handprints at reception – which was made on the day Matt visited.
I’ve a lot of lovely memories of that day. But when faced with having to recollect the whole amazing day to an eager audience, this particular quote got me thinking:

“The great thing about the Doctor is that, if you can imagine the alphabet, as a character, in the space of three or four lines, he gets to go from A to Z like that! [Clicks fingers.] The Doctor can just skip from being really happy to really sad to kind of okay – and I think having that palette, as an actor, is really exciting.”

So let me walk you through the Experience, circa 2012. Of course, the strict alphabetical order leaves little room for chronology. But never mind that. Humans: you’re so linear. 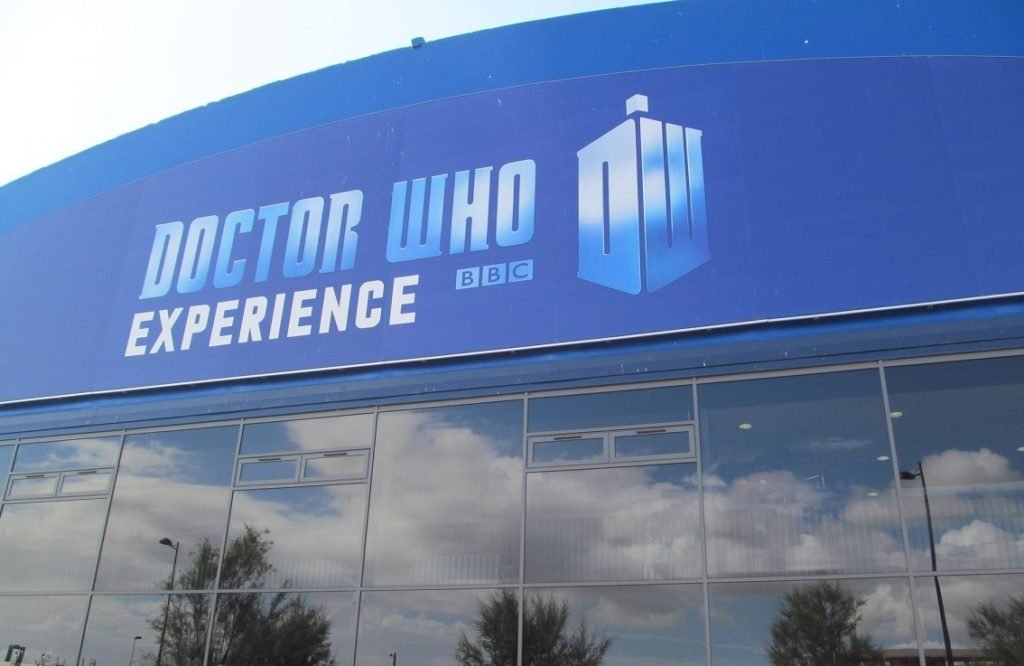 The Experience is bigger than expected. You can see it all the way back from Roald Dahl Plass (under which sits the Torchwood Hub, unless TV has lied to me) and the Red Dragon Centre, where the previous exhibition was held. It’s certainly impressive, and has been a long-time coming as Philip Fleming, Head of Communications at BBC Worldwide, said in 2012:

“[It’s been] three years since, I think, the first specific conversation started about this venue; three years of hunting for the right property. And at times, it seemed like it simply wasn’t going to happen. In fact, the only reason it has happened is because we didn’t find a property: we created a brand-new facility. And that was only possible through the hard work and very close co-operation that took place between Cardiff Council; the Welsh Assembly government; property developers; and the BBC, of course.”

Ushered into the reception area – just behind (now-former) Doctor Who Magazine editor, Tom Spilsbury! – it’s hard not to get excited at the sight of a glorious new Dalek, the Cyberman head from Stonehenge, and Bessie. It’s even decorated beautifully, with walls adorned with awesome art by Anthony Dry.
But all that pales in comparison to the anticipation vibrating through the crowd; because we’re going to not just meet, but also interview the man who is the Doctor.
After a wait that feels like an hour (but was probably only fifteen minutes), we head upstairs, catching tantalising glimpses of the shop, which sports all manner of marvellous merchandise, and enter the exhibition. The wrong way in. We start at the end, and huddle around, waiting for the main star to arrive…

There’s a distinct lack of bow ties here. It’s certainly not a convention. There’s an air of professionalism (well, as much as a gaggle of journalists can muster, anyway), and I even hear a couple of people behind me laughing at the thought of asking Matt for an autograph. I put away my Sharpie. 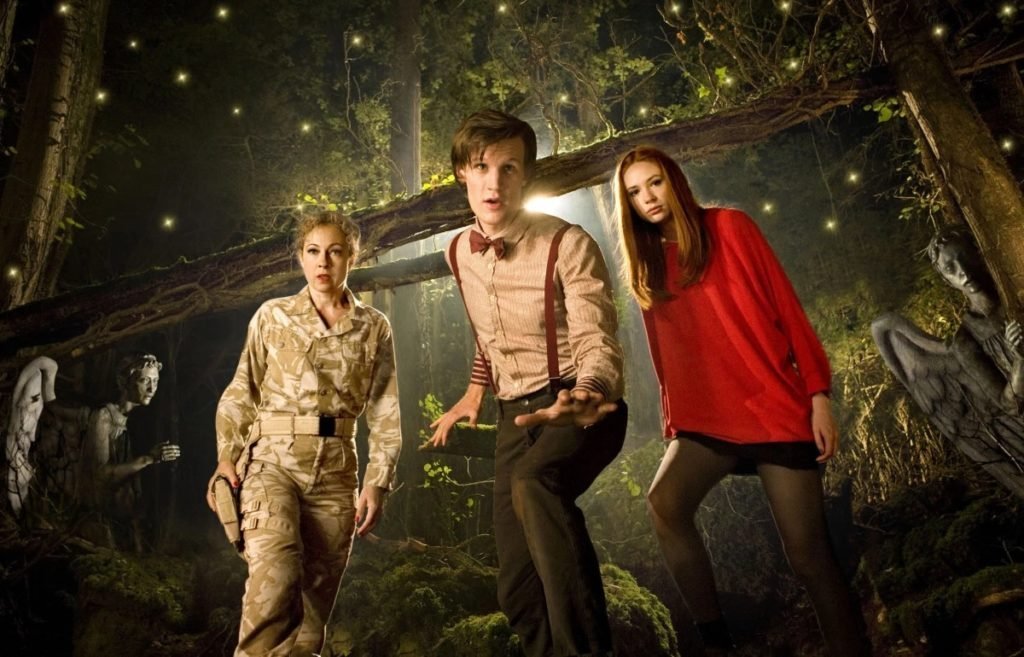 Still, Matt acknowledges how important his refusal of a normal tie is; when asked what defines his Doctor, he says:

“Probably a bow tie and fez, I think! And [showrunner] Steven Moffat’s writing. I don’t know, really. I mean, I hope it’s inventive, and I hope it’s funny in places… I hope there’s an interesting take on it. That’s what I try to do. I try to be inventive with the character and the ideas that come with it – and express them in a silly way!”

Just when I think the day’s going to end without a bow tie in sight, I find myself walking up the stairs behind a man with a pretty long scarf. He’s obviously taking his inspiration from a certain Time Lord, I decide, even if the scarf isn’t multi-coloured or 24ft long. At the top of the stairs, I’m welcomed with some red wine (I thought it’d be more like the gums) and the Silence with their Time Ship. Then I realise who I was just walking behind.
Sporting a quite incredible polka-dot bow tie, and being harangued by a couple of visitors, is production designer, Michael Pickwoad. He first began work on Doctor Who with A Christmas Carol, one of my favourite serials, and his dad is William Mervyn, aka. Sir Charles Summer in The War Machines. This is incredible. I wonder who else I might see pottering about.
(At the Doctor Who Festival in 2015, I see Michael again, this time to talk to, albeit briefly. He bought a Fourth Doctor Scarf from Lovarzi.) Now, this is a year before The Day of the Doctor, so Doctor Who’s 50th anniversary is a hot topic. But Matt can’t give anything away… Not that he knows everything anyway.

“No, [Steven] doesn’t share much with me. But I’m intrigued to find out. Something’s got to happen, right?!” he continues. “We’ll have something that honours the history and the heritage of the show in the biggest and best way possible. And I know that Steven will come up with something really inventive, and, y’know, we want to make it the biggest celebration for the biggest year of the show.”

Naturally, thoughts go to a multi-Doctor story. Any chance?

“I dunno; that’s a Moffat question, actually,” Matt says. “You’ve got to ask him. He’s the man in charge of all things 50th anniversary. I think it’d be very exciting to think they could – whether or not it’s possible nowadays. I don’t know.”

And so to Mr. Moffat. Is there anything he can tell us?

We’re surrounded by all manner of creatures – some of which I’ll get to soon – but what’s Matt’s favourite foe?

“I think the Angels are the most interesting, and I’ve had so many battles with them as the Doctor that I love them. The Silence are very clever as an idea. And you’ve got to love the Daleks as well, I think – deep down somewhere!”

The evolution of the Daleks display stands proud, almost like a mini-Asylum. There’s Davros from Journey’s End, the mysterious yellow Eternal Dalek, and a bronze RTD-era Dalek. One of the coolest is probably the Special Weapons Dalek, standing out from the crowd superbly. But then there’s the 1960s Dalek. Wow. That classic design is almost the stuff of legend.
It’s weird. They’re just props. But you can see how they could exterminate the universe, particularly as you meet the Supreme Dalek in the actual Experience: that deep, booming voice, the tank-like exterior, and that unforgiving stare. Let’s move on. Quickly.

The last stop for visitors will be the shop, filled with exclusives. Of course, the press went through it first – but then, the press are an odd bunch. It’s still the last stop for me, as I didn’t feel like lugging heavy and bulky collectibles around. I could probably manage the iPhone cases – displaying a variety of things including the Eleventh Doctor’s sonic screwdriver and the old TARDIS console – or the limited edition postcard sets. But I have some bigger beasties in mind.
Namely, an Eleventh Doctor bust Experience exclusive with the burgundy bow tie. I’d missed the chance of the Victory of the Daleks variant from the Doctor Who Convention, so when I saw another variant there… well, it had to be bought. Especially at nearly half price. 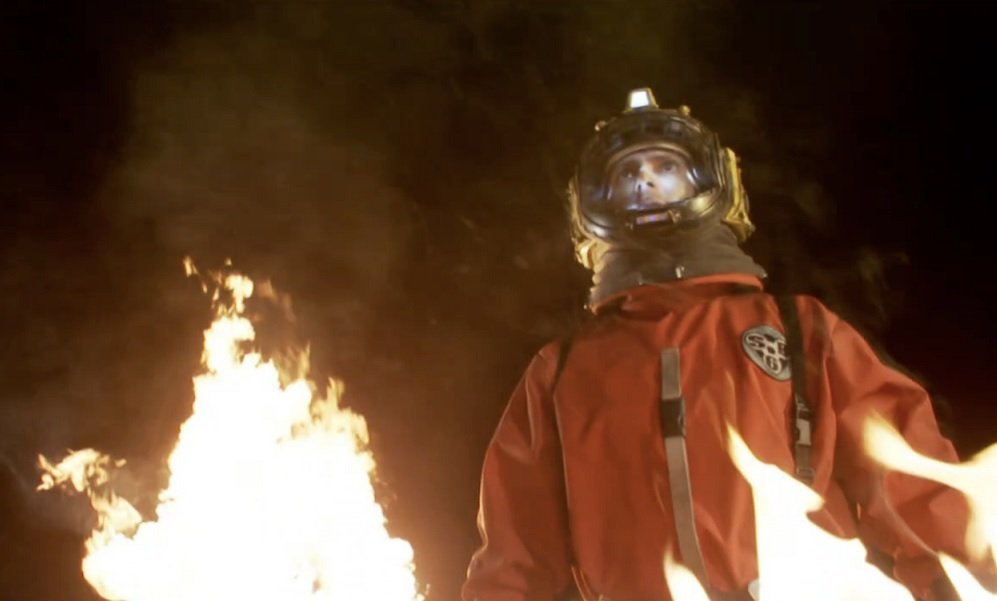 After the crowds have looked around, Matt returns, flanked by the two robots from Dinosaurs on a Spaceship. He signs a few autographs (where’s that Sharpie gone?!), poses for the cameras, and laughs as the robots clunk about.
When he’s gone, everybody just dots around, trying their best not to be intimidated by the robots that are posing for their own photos. Then I spot Gary Russell. His name’s all over Doctor Who. He edited the official magazine in the early 1990s; has written loads of books; produced for Big Finish; and script-edited The Waters of Mars and The End of Time.
I’m on a collision course with him. Then one of two things happen. One: it suddenly goes through my head that I’m wrong; that my knowledge of Doctor Who isn’t as extensive as I thought it to be. He’s not Gary Russell. His name’s Chris Brownett and he works for the CQC. Why he’s here is a complete mystery.
Or two: I get a bit nervous (even though I’ve just interviewed Matt Smith) and slow down momentarily. I then remember that I’ve just interviewed Matt Smith – Matt Smith – and speed back up. But too late. Two people corner him – and they’re there for the long-haul. I walk away cursing myself because, y’know, that was Gary Russell. Ah well. At least I’ve just interviewed Matt Smith.
In Part 2: Matt’s plea for work, Sontarans, and some very short shorts.
(Heavily adapted from an article originally published in Kasterborous Magazine #1.)