“We’re here to celebrate the Doctor Who Experience in Cardiff, Wales, and it’s just exciting to be part of a show that has a history like this. It’s a privilege to be in something that people actually turn up to, as well, but actually seeing all these things under one roof… It’s quite exciting, isn’t it? It’s quite an exciting thing – an experience!”

A lovely introduction. Thanks, Matt.
You’re back! We’ve travelled back in time to 2012, and Matt Smith’s first visit to the Experience. (Not up to speed? You can read the first part of this A to Z here.) And I’m surrounded by journalists, photographers and Doctor Who-related folk. Oh, and some other things too…

“You’ll see brand-new exhibits that are being unveiled today, which are content from the new series of Doctor Who – Series 7 – so, for example, you’ll see new costumes and also, by public demand, for the first time ever, we’ve got a Weeping Angel included in the exhibition – and that’s obviously a real fan favourite monster created by Steven [Moffat, showrunner].”

But the Series 6 content is equally a big draw. It’s been a few years since I’ve visited an exhibition: the Red Dragon Centre one, which had been open for five years, closed in 2011; the hugely-successful one at Earl’s Court had been superseded; and I didn’t manage to see the original Experience at London’s Olympia. So this is my first opportunity to see a lot of things from Matt’s era as the Doctor. 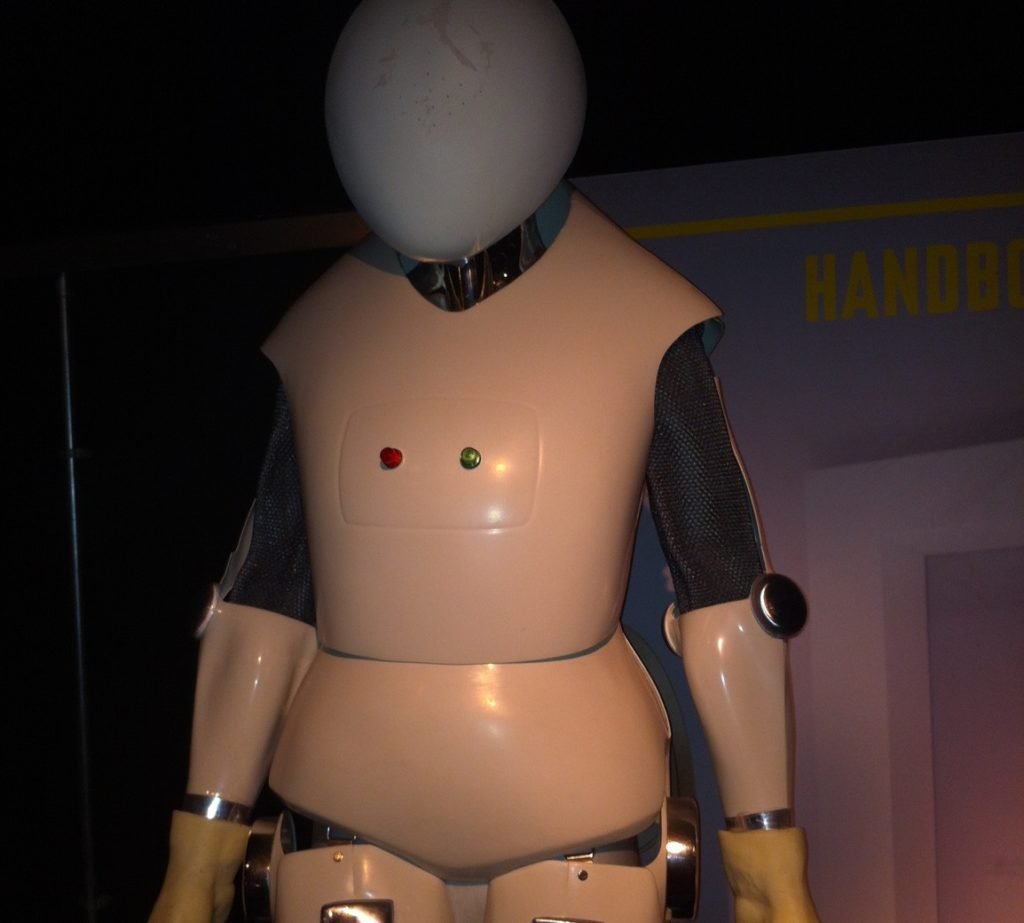 The Silence in their Time Ship is really cool, a little creepy, as are the Peg Dolls from Night Terrors. The detail on the Doctor’s (and Melody’s) cot is incredible – that old Gallifreyan – and look; the Doctor’s first stars. In the reception area, there’s also the rusty Cyberman head found at Stonehenge, an assortment of River’s possessions (including two spoiler-filled diaries), and something for the old school: Bessie, in all her glory.
Perhaps the highlight for me though is something from one of my favourite episodes: a Handbot from The Girl Who Waited. Apparently, there were previously two on show, which is a shame, but the one that remains is sleek and cool. The sterile, shiny exterior reflects their supposed surroundings on Apalapucia perfectly, and the hands are just removed from ours to appear surprisingly creepy.

But it’s not all new. In fact, some of the best bits come from ‘Classic’ Who. Fleming says:

“There are lots of things that we’ve found people have thought lost forever and we’ve sort of dug them out, like the Ice Warrior costume that you can see upstairs that Bernard Bresslaw wore back in the Sixties. That was lost and forgotten and, in fact, when we pulled it out of the cupboard, it was in a pretty shocking state, but we’ve done a lot of work on restoring it.”

The Ice Warrior is, of course, massively impressive. It’s the original Varga costume from 1967’s The Ice Warriors, and they’ve really done a fantastic job in restoring it. It looks almost new – certainly only as worn as the Face of Boe and a Scarecrow from The Family of Blood. 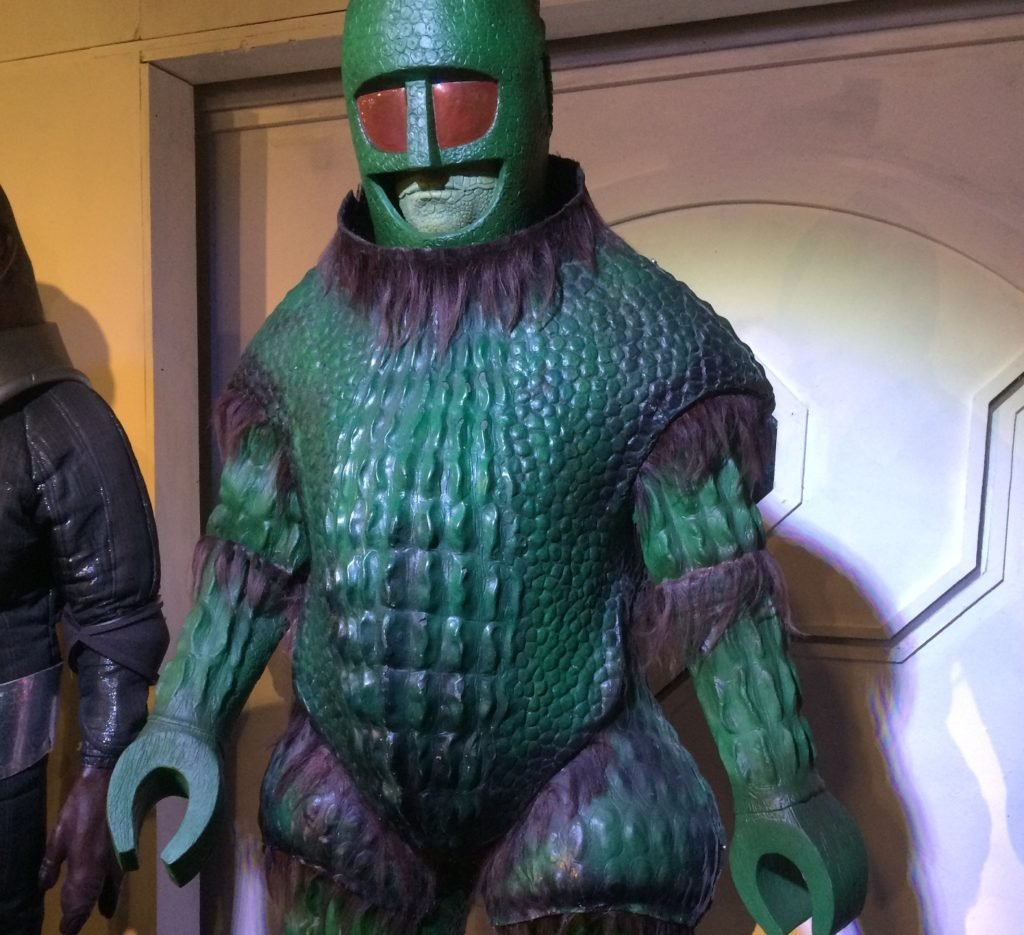 Back in October 2012, of course, we hadn’t met Clara Oswald, even though Matt had been filming with her since May. Jenna was also Jenna-Louise Coleman. As far as we knew, Jenna’s character would be Oswin Oswald, as she was in Asylum of the Daleks.
There’s something in Matt’s hesitation when I ask him about his favourite scenes:

“I love the Amy and Rory scene, falling off a building in The Angels Take Manhattan; I love the revelation of Jenna’s character in the Dalek episode…”

It was almost like he’s used to calling her a different name, and can’t quite remember what she was called in Asylum – and so didn’t want to give away any spoilers.
And how does it feel for him to move on without Amy and Rory?

“It’s kind of like a new pair of – – No, it’s not! [Laughs.] You have to treat them differently and I think it changes the way [the Doctor] is, hopefully. I keep saying that and I don’t know what I’ve done! But y’know, isn’t that what’s exciting about the show? You sort of get a first episode again. And I think all the stories come together… The Ponds had a wonderful time and they’re part of a wonderful era, but now it’s time for Jenna to have her adventures – and I think she’s going to be one of the best.”

She really was dressed for Rio. 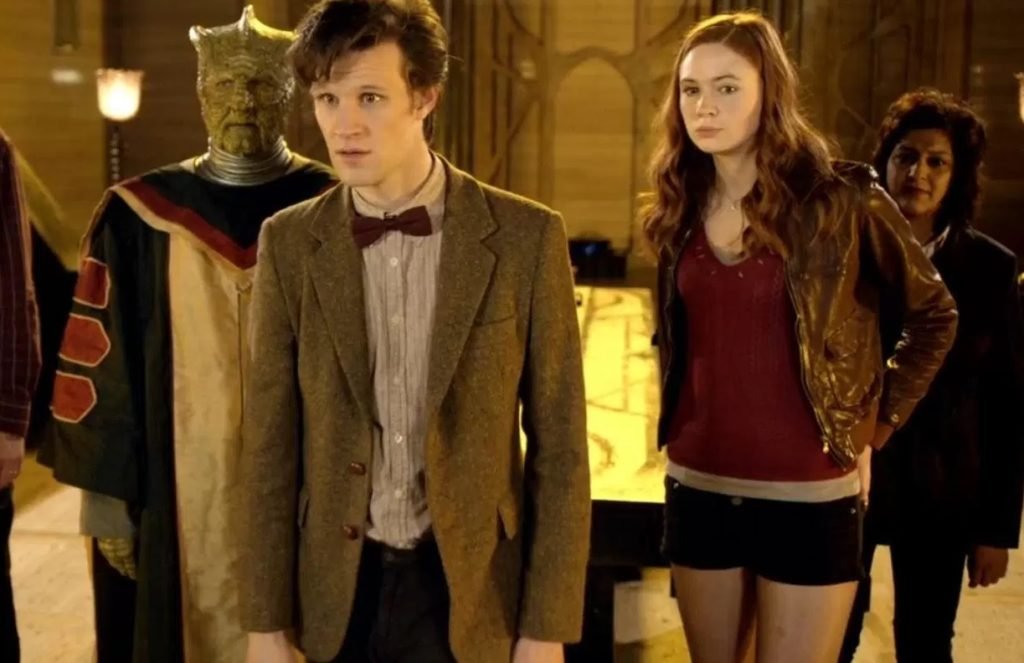 On display amongst a plethora of companions’ clothing stands Karen Gillan’s outfit from The Hungry Earth/ Cold Blood. Those shorts really are short, y’know.
And stood next to her is Arthur Darvill’s costume, complete with The North Face jacket. As a couple of journalists noted when wandering past: “Nice bit of advertising.”
It’s also the one that the sole Rory Williams action figure is modeled on (and yes, the BBC Shop exclusive is available there).
Opposite, there’s River Song’s dress from The Time of Angels/ Flesh and Stone, and, bizarrely, Astrid Peth’s from Voyage of the Damned. And, showing how Amy has evolved, there’s Amelia’s ensemble from the night she waited for the Doctor. Matt Smith has a little bit to say about how his Doctor has evolved:

“I guess that’s for you guys to decide. I don’t know. I mean, I’ve got a bit older. I’d imagine he probably feels a bit older, a bit wiser, a bit more silly… That’s the great thing: there’s no limits to him. And how I’ve evolved? I’m getting grey hairs. I am! I’ve got three grey hairs! Nightmare.” 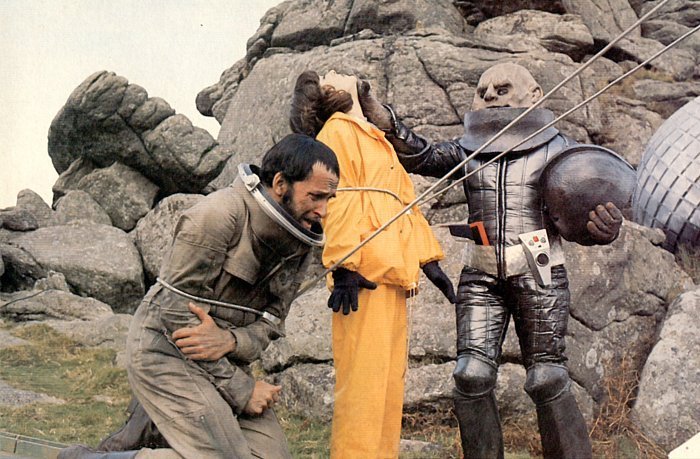 The Sontarans have got shorter.
I mean, I know they’re a somewhat stunted race, but with The Time Warrior’s Linx and The Sontaran Experiment’s Styre stood next to General Staal/ Commander Stark/ Commander Halke… Well, the latter’s just a little shorter.
I presumed the new series clones would be about the same height as the Classic clones. While I’m probably the same height as Linx and Styre, it’s somehow nice to know that I’m slightly taller than Christopher Ryan, who donned the suit in The Sontaran Stratagem/ The Poison Sky, The Pandorica Opens, and (sort of) The God Complex.
Although I’ve never been known as ‘The Cool Person,’ so I guess it’s one-all.

I feel it’s my duty to shine the light on the Melkur.
We’ve all heard about Matt and Steven ‘cementing their place in history’ (ho ho), but opposite them was the Melkur. The Keeper of Traken was never my favourite of serials, but the Melkur is pretty cool, particularly the detail put into it. It’s smaller than I thought it’d be (is there a theme developing?), but that just means you can examine it a bit more. Surprisingly, it does resemble stone, not Styrofoam, but most incredibly, the moss looks real.
But it’s largely ignored by the masses simply because, y’know, Matt Smith and Steven Moffat are here. But rest assured; it doesn’t go completely under-the-radar by those who were there.
Steven tells the press:

“I’m very excited and honoured to have my hands preserved forever. And quite relieved they came back out of the cement! I now know, for all my future crimes, that my fingerprints are readily and permanently available.”

But I’m pretty sure that he, too, appreciated it. He is, after all, just a massive fan.

We’re really here to see new Series 7 exhibits being unveiled, actually covering three of the five episodes of the most recent run. Representing Asylum of the Daleks is… Oswin Oswald. Jenna-Louise Coleman’s famous red dress stands next to that Dalek. Matt expands on how Jenna was getting on:

“She’s doing fantastically well. It’s such a mad and bizarre thing to try to settle into, and she’s done that fantastically. She works very hard; she’s very detailed. She looks great. You know, it’s sort of all the right things are in place for her to be a really celebrated companion.”

The aforementioned Weeping Angel from The Angels Take Manhattan is there too (the chained-up, damaged one that grabbed River’s arm), alongside the three cherubs that heartlessly attacked Rory in the cellar. And of course, there are Queen Nefertiti’s and Soloman’s costumes in front of an Egyptian column from Dinosaurs on a Spaceship. A pterodactyl – well, alright, a Pteranodon – lurks above them. A nice mix of the main aspects of the show: time and space. But which does Matt prefer to explore?

“Well, the great thing about being the Doctor is you get to do both. That’s kind of like saying; do you prefer pudding or the main course? It’s so difficult. I like a bit of both. I know that’s a really boring answer! And that’s what’s wonderful [about being the Doctor]… Every two or three weeks that you film an episode, you get to chart a new territory, and so it’s constantly exciting as an actor.”

Apparently, other shows exist. And I don’t just mean The Sarah Jane Adventures, Torchwood, or even (shudder) Wizards vs. Aliens. No, Matt has designs on work in America…

“I love Breaking Bad; I love The Walking Dead… I’m watching Dexter at the moment. I’ve picked up the box set of Homeland today – I love my box sets! And I love film, y’know? I love to watch film; it’s always been a favourite pastime. But I love Breaking Bad if anyone’s listening…” Amongst the exhibits stands one side of the Pandorica. It could easily be missed, tidied away and leaning against a wall; but maybe that’s because where it usually sits is now occupied by the press, all hungrily interviewing Matt. He clearly has designs on it, as he’s asked which exhibit he’d take home:

“Ooh… I’d kind of like the whole of the Pandorica box. Just cook in it or something, y’know!”

The inescapable (unless you have a sonic screwdriver) prison would make quite a nice kitchen. You’d have to install an oven or maybe just a microwave, of course, and any meat you try to cook would be brought back to life (presumably), as the Pandorica forces you to stay alive – but apart from that…
In Part Three: “Me looking hugely constipated.”
(Heavily adapted from an article originally published in Kasterborous Magazine #1.)