Your Guide to Doctor Who: The Lost Dimension

This year’s comic event from Titan brings together numerous incarnations of the Doctor – most extensively the Ninth, Tenth, Eleventh, and Twelfth Doctors – in a fight against… the Void!
The Lost Dimension is an 8-part series written by Cavan Scott, George Mann, and Nick Abadzis, and crosses over into the regular Tenth, Eleventh, and Twelfth Doctors comics.
Here’s all the solicitations, so you can plan out a reading order for the next month.

Doctor Who: The Lost Dimension – Alpha 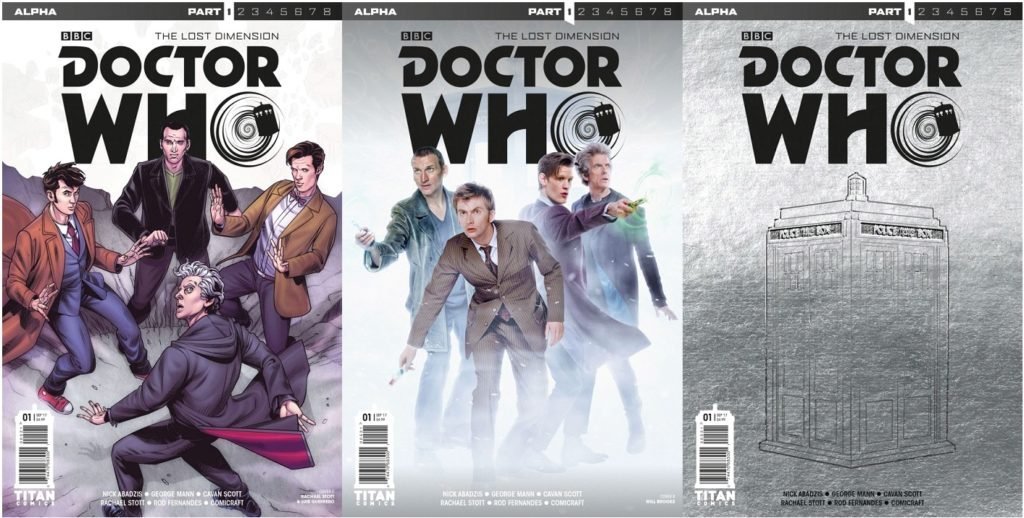 Written by George Mann and Cavan Scott. Art by Rachael Stott and Rod Fernandes.
Released on 30th August 2017.
The Void has always existed: “No place. The silent realm. The Lost Dimension.”
But THE VOID is no longer empty. The Void is hungry. It’s devouring our universe – through Time and Space!
NOW, EVERY DOCTOR MUST PLAY HIS PART TO SAVE… EVERYTHING!
Cover A: Embossed TARDIS Foil Cover. Cover B: Will Brooks. Cover C: Rachael Stott and Luis Guerrero. Written by Cavan Scott. Art by Adriana Melo and Marco Lesko.
Released on 30th August 2017.
With the Void devouring the universe from the outside in. The Ninth Doctor and Rose escape to Victorian England, in order to gain crucial information in the fight against the end of everything!
Cover A: Adriana Melo. Cover B: Will Brooks. Written by Nick Abadzis. Art by Mariano Laclaustra and Carlos Carbrera.
Released on 6th September 2017.
The Tenth Doctor, Gabby, and Cindy investigate a mysterious black hole – out of which white light is spilling – and which has drawn the attention of an ancient foe of the Doctor!
Cover A: Tazio Bettin and Luis Guerrero. Cover B: Will Brooks Written by Nick Abadzis. Art by Leandro Casco and Triona Farrell.
Released on 13th September 2017.
The Eleventh Doctor and Alice arrive in an impossible time, caught in an impossible moment of history! Can the Doctor resist making a change that could doom – or save – the universe?
Cover A: Klebs Jr. Cover B: Will Brooks.

Doctor Who: The Lost Dimension Special #1 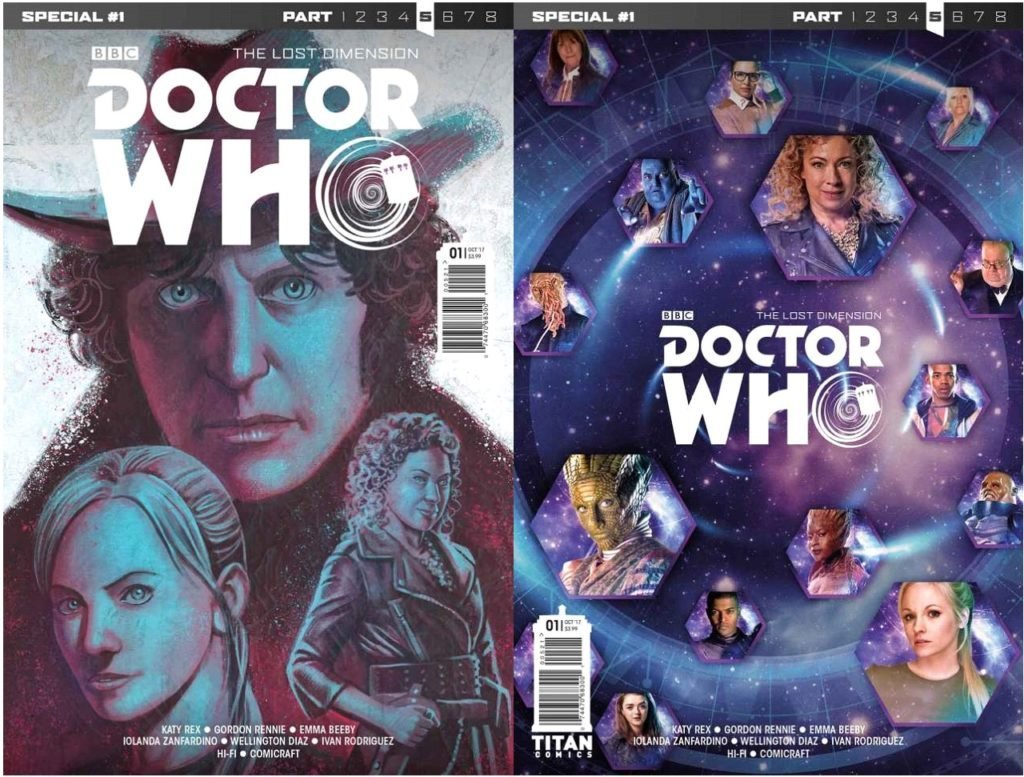 Cover A: Mariano Laclaustra. Cover B: Will Brooks. Written by George Mann. Art by Rachael Stott and Rod Fernandes.
Released on 27th September 2017.
The Twelfth Doctor, Bill, and Nardole make a stunning discovery regarding The Void’s invasion…and the population of Planet Earth is turned against their greatest protector!
Cover A: Klebs Jr. Cover B: Will Brooks.

Doctor Who: The Lost Dimension Special #2 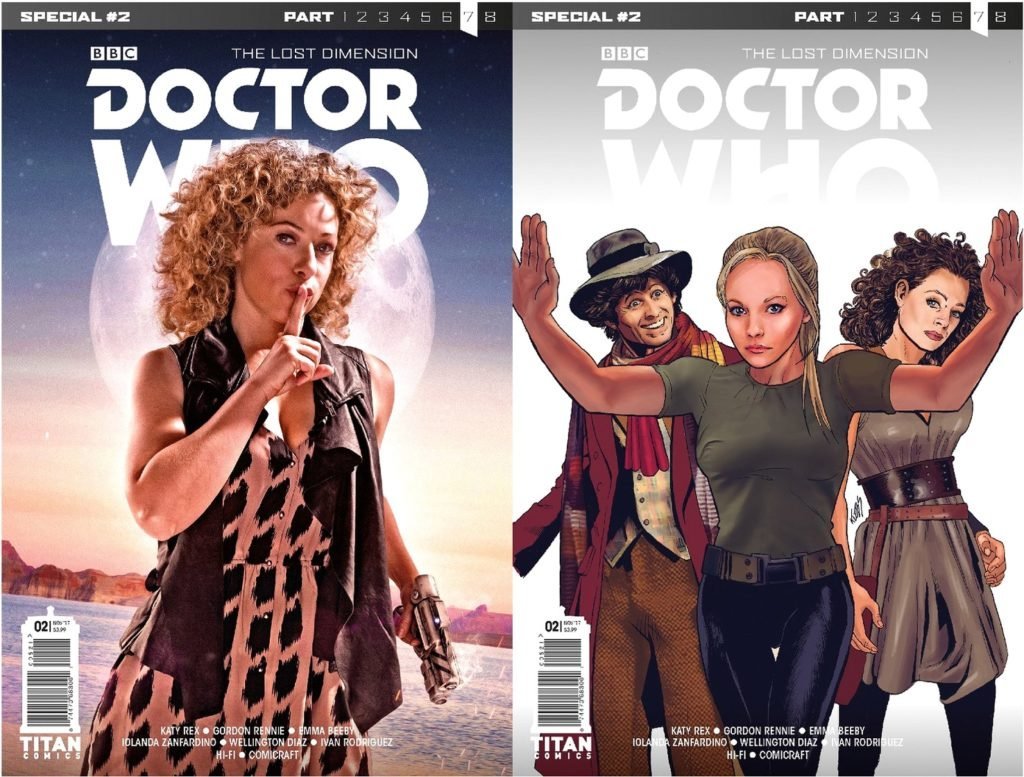 Written by Katy Rex, Gordon Rennie, and Emma Beeby. Art by Iolanda Zanfardino, Wellington Diaz, Ivan Rodriguez, and Hi-Fi.
Released on 4th October 2017.
The truth behind the unforgettable journey of Jenny, the Doctor’s daughter, revealed!
How did the Fourth Doctor get entangled in the machinations of the void?
And River Song goes her own way, even as the universe falls apart around her!
Cover A: Klebs Jr. Cover B: Will Brooks.

Doctor Who: The Lost Dimension – Omega 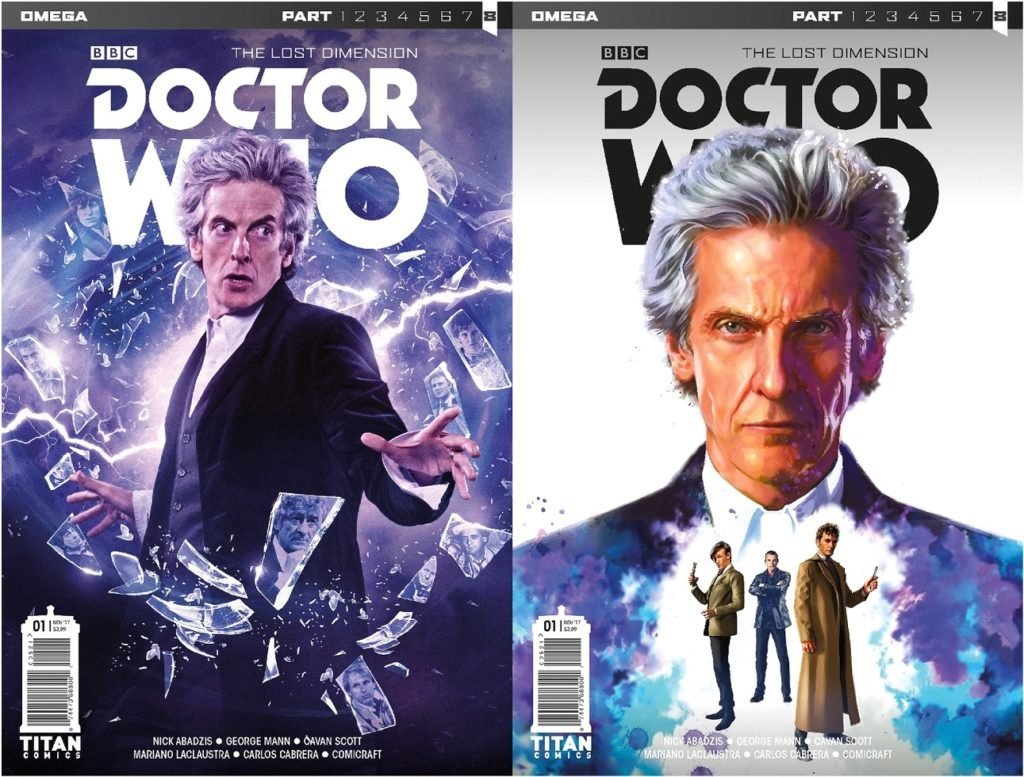 Written by Nick Abadzis, Cavan Scott, and George Mann. Art by Mariano Laclaustra and Carlos Cabrera.
Released on 11th October 2017.
The thrilling conclusion to this year’s event! As the universe slips away into the void, the Doctors are brought together to face a foe as colossal as it is unlikely!
The rules of time and space, cause and effect, break down completely, and the Doctor is all that stands between earth and annihilation!
Cover A: Alex Ronald. Cover B: Will Brooks.
Join us throughout this week, as the DWC celebrates The Lost Dimension with reviews, thoughts about the Void itself – and an exclusive interview with Nick Abadzis!

Your Guide to Doctor Who: The Lost Dimension