Pain and Magnificence: Vincent and the Doctor Revisited

This is a hard one to write. There is so much in here to unpack. It’s like moving house; sat in strange new walls, fresh territory, surrounded by boxes, and not knowing where to start – so that, in the end, you do not. Where indeed do you start with what is quite possibly the most perfectly-constructed, moving, and profound episode of Doctor Who since the show’s revival?
Vincent and the Doctor shares something in common with another of my favourite episodes, The God Complex: the obscured, sparingly seen antagonist, only visible in the briefest of moments. Unseen enemies can divide an audience. They disappointed my son, who was somewhat taken aback when I told him (after considerable badgering) that the Doctor would come face to not-quite-face with a gigantic invisible chicken. Children relish in the tangible; sometimes, you have to give them something. Mine spent the episode’s aftermath in quiet, mournful contemplation, their minds racing with new possibilities: that everyone always leaves, that sometimes winning is no fun at all. This is a story soaked in beauty, but it carries a harsh truth at its core: the nightmarish thing that haunts the alleys and fields of Arles is nothing compared to the demons that live inside the artist’s head. 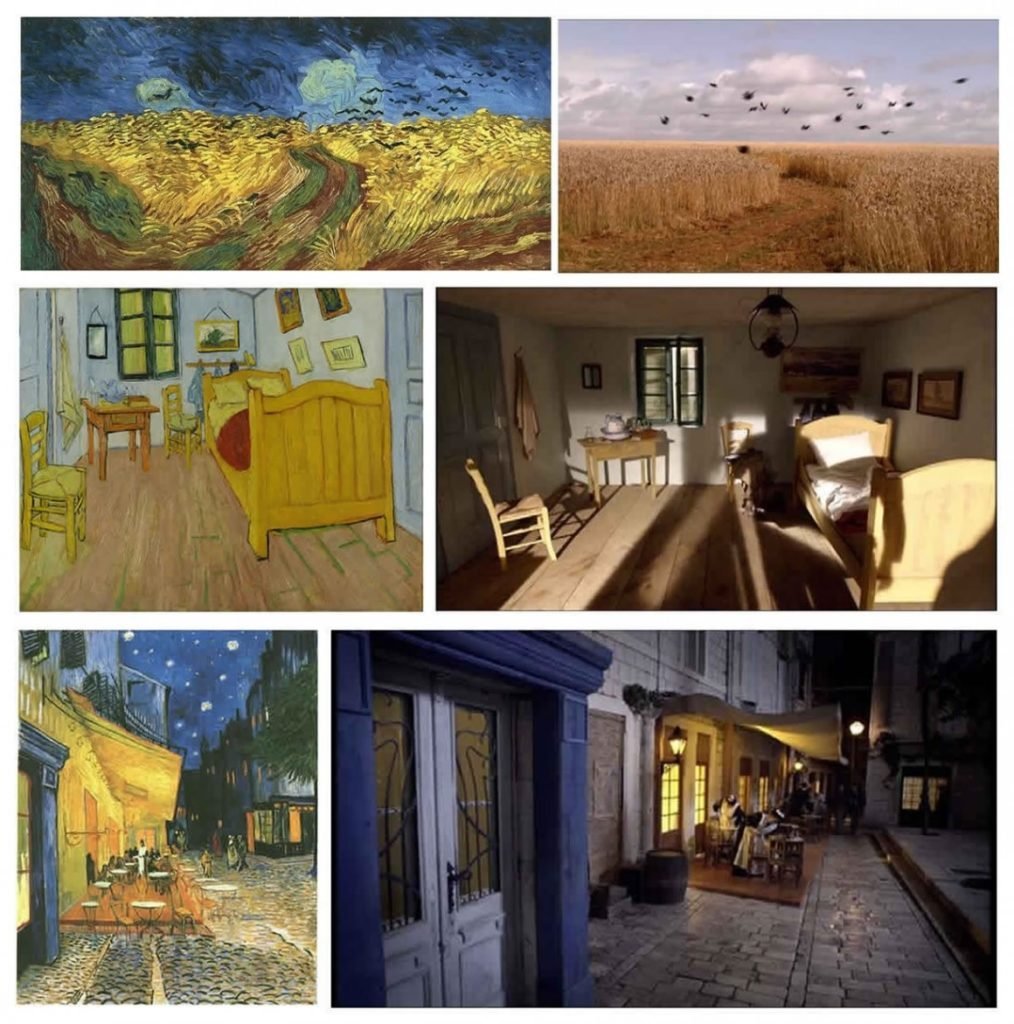 What’s striking (if unsurprising) about Vincent is how, given the comparative absence of the monster, the gaps are plugged elsewhere. Visual motifs of Van Gogh’s paintings are abundant, constructed carefully but by no means symmetrically, giving the impressionist eye room to work. The light from the reconstructed pavement cafe spills out into the evening, even before Vincent follows it. Shadows linger across the floor of the bedroom where the artist will eventually rest in torment. Crows take flight over a wheat field. And, in one of the most arresting moments, Amy sits outside the cottage, smiling from ear to ear even as her inner, repressed sadness gnaws away, surrounded by sunflowers, which Vincent himself describes as “always somewhere between living and dying”.
But ultimately this is a character piece, and Curtis sensibly keeps the characters to a minimum. The scholarly Dr. Black (an uncredited Bill Nighy, on fine form) is the 21st Century enlightened human, while Van Gogh’s peers are reduced somewhat to sneering stereotypes – but this is necessary, in a way, in order to portray the pain of the artist. And even this has its subtext. The dialogue is comparatively colloquial, and Vincent’s exeunt from the cafe instantly recognisable: what future Van Goghs, Curtis appears to suggest, have we chosen to ridicule and demean in 2010 and beyond?
Discourses on art aside, this is an episode about bipolar disorder, perhaps the only time the series has ever tackled such an area, and certainly the most direct. It would have been comparatively simple to take the sensationalist route, and Curtis deserves nothing but praise for managing to handle it without lapsing into the cliches that haunt some of his other work. This is one of the most sensitively observed depictions of clinical depression I’ve ever seen in a family show – and, despite (or perhaps because of) the evocative, bittersweet finale, one of the most satisfying.
It’s interesting that Van Gogh’s mid-episode breakdown, in which he confines himself to bed and demands that the Doctor leave, is triggered not by a traumatic incident but by a single careless line of dialogue. It’s a testament to the power of words to inflict wounds, and a cutting reminder that even the best of us make mistakes. Had the words come from Capaldi, we would have put it down to his brusqueness. But the Eleventh Doctor, while remote, is still good with people even when they do not understand him (cf. The Lodger), and this knowledge somehow cuts a little deeper – even more so when he tries to comfort the artist, only to simply make things worse. 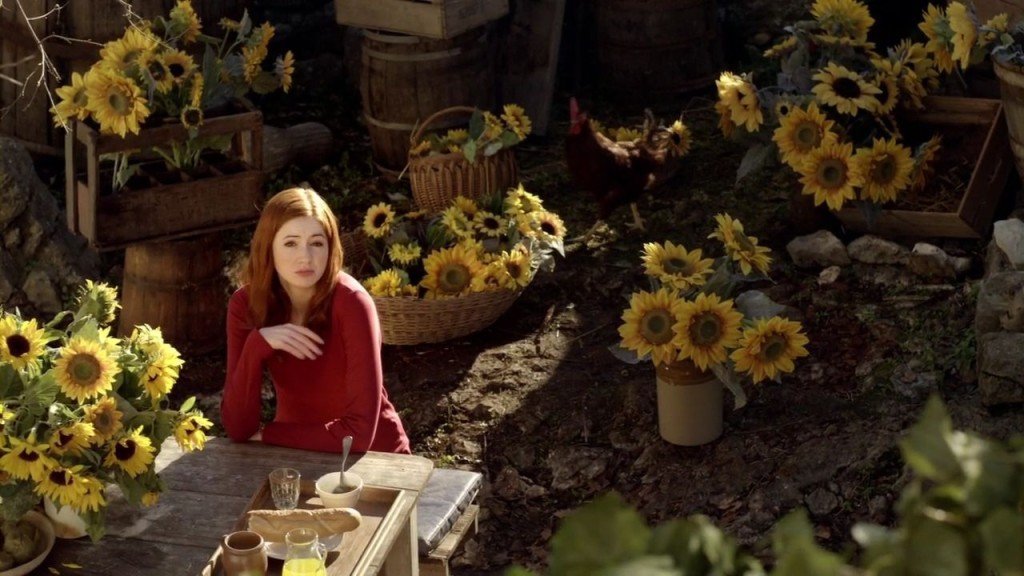 The battle with the Krayafis is the story’s McGuffin, but Curtis gets it out of the way comparatively early in the third act, allowing time for a series of emotional denouements. Perhaps the most beautiful of these takes place as the Doctor, Amy, and Vincent lie on their backs looking up at the night sky, which seamlessly transitions into The Starry Night. It is clear that Van Gogh’s ability to see the world the way he does – whatever the repercussions – is unique, but it is his ability to describe what he sees with words as well as with paintings that really comes across here.
“Brighter than sunflowers,” declares a tearful Amy in the epilogue, encapsulating both Vincent himself – doomed to burn twice as bright, half as long – and the paintings he created. “It’s colour,” he admits, earlier in the episode. “Colour that holds the key. I can hear the colours. Listen to them. Every time I step outside, I feel nature is shouting at me.”
But the Krayafis – orphaned and blind and fearful – itself becomes a metaphor, a testament both to the power of depression and those who do not understand it. As the three companions gather in silent homage over the creature’s unseen corpse, Van Gogh remarks “He was frightened, and he lashed out… like humans who lash out when they’re frightened”. Curtis fashions a monster that is both victim and antagonist, and as much a part of Vincent, in many ways, as his talent with a brush. It would have been comparatively simple to explain away the monster and, by turns, the artist’s mental state, with pseudoscience, but the writer does neither. There is a rational scientific explanation for the presence of the Krayafis – just as the rational scientific explanation for depression is a chemical imbalance – but this does not detract from its power to torment, or the fact that Vincent is the sole character who is fully aware of it.
Most tellingly of all, the Doctor is not able to ‘cure’ Vincent – nor, it seems, does he particularly want to. His decision to give the artist such a concrete vision of his future seems, at first, more than a little out of character, until the final scene in the gallery where it is revealed that the revelation has made only cosmetic alterations to Vincent’s life, with his suicide and eventual legacy untouched. Amy (and, by turns, the audience) is forced to learn the hardest of lessons: that the differences we make do not always amount to more than the sum of their parts. Crucially, it is Van Gogh himself who foreshadows this, when he admits that “On my own, I fear I may not do as well”. Perhaps one of the nicest things about the episode is the reverence with which Amy and the Doctor greet Van Gogh, without ever lapsing into sycophancy. Even in the final, rather overstated gallery sequence, they’re content to allow Bill Nighy to do the talking. There is none of the giggling of Rose’s encounter with Queen Victoria, or the name-dropping in Donna’s meeting with Agatha Christie. Indeed, for a Curtis script, it’s comparatively light on humour, which is perhaps sensible. Smith blunders in and out of the situation with customary Doctorishness (is that a word? It should be a word), making all the usual mistakes that people make when they don’t know how to talk to people with depression. Gillan is sensitive and radiant, although it’s Amy’s silent, inner turmoil in this first post-Rory episode – an unspoken sense of grief, without knowing why – that enables her to handle Vincent as well as she does.
I’m sure I’ve said it before, but the fact that Vincent and the Doctor manages to tackle such heavy subject matter and escape with its dignity intact is a credit to absolutely everyone concerned. It’s a credit to the designers and production team, who visualised 19th Century France so vividly. It’s a credit to Richard Curtis – and Steven Moffat, who knew how to fashion and evolve his ideas into a script that delivers.
Perhaps most of all, it’s a credit to the series regulars, and also Tony Curran, whose portrayal of Vincent is breathtaking. It’s an episode that paints the stark sadness of loneliness and juxtaposes it with the brilliance of inspired creativity – as Dr. Black says, “Pain is easy to portray, but to use your passion and pain to portray the ecstasy and joy and magnificence of our world… No one had ever done it before. Perhaps no one ever will again.”
Vincent and the Doctor is a reminder that the world is more wondrous than we could possibly hope to imagine – but most of all, it’s a reminder of exactly what it means to be human.
(Adapted from an article originally published on Kasterborous in 2016.)

Pain and Magnificence: Vincent and the Doctor Revisited

All of Time and Space Dorica the Explorer: Mythology and Religion in The…
10
%d bloggers like this: