The title for this piece is a little bit misleading, a little bit… clickbait. After all, I don’t seriously think that I’m going to convince anyone that Destiny of the Daleks is better than Genesis of the Daleks. In fact, I’m not sure it’s a position I wholly believe myself. The fact remains, however, that I’m more likely to reach for Destiny than Genesis when I want my Dalek fix (and there’s more chance of me going for The Chase than either, but that’s a story for another day). Why is it, then, that Destiny resonates with me nowadays in a way that Genesis doesn’t?
Partly, it’s down to nostalgia. I do have a nostalgic relationship with Genesis, but it’s more to do with the audio version, edited and released as an LP record with newly-recorded narration from Tom Baker. I wasn’t old enough to see the original serial when it went out live and only caught up with it when it was repeated. I would have been about five when Destiny was broadcast and was scared stiff when the Daleks burst through the walls at the end of Part One, which remains a strong televisual memory for me (no doubt re-enforced by numerous repeat viewings).
It’s not just nostalgia that fuels my love of the story, though, and I do feel its good qualities are often overlooked. I like, for example, that it has quite a lot of humour in it.
Destiny could easily have been as grim-dark as Genesis, which concerns the Time Lords’ attempt to stop the Daleks ever having been created. It sees the Doctor and his companions sent back to Skaro, which at that point in its history, just before the creation of the Daleks, is a planet riven by the war between the Kaleds and the Thals. The story is full of violence, betrayal, and double-dealing with the odd bit of torture thrown in for good measure. Destiny is also set against the backdrop of a war, this time between the Daleks and the Movellans, two implacable races of robots (we’ll come back to this point) who are now at a strategic impasse because they both rely on pure logic for their decision-making. The Daleks have come back to Skaro and are using humanoid slaves to excavate Davros, their creator, who was entombed at the end of Genesis. They hope to get his help and defeat the Movellans.
At the time Destiny was filmed, Graham Williams was the producer of Doctor Who and Douglas Adams (famous for The Hitchhiker’s Guide to the Galaxy) was the script editor. The show was lighter in tone than it had been when Genesis was made and broadcast, under producer Philip Hinchcliffe and script editor Robert Holmes (both lovers of a darker approach that sometimes tipped Doctor Who into the realm of grand guignol). For some fans, this lightness is a problem. Not for me. I like the fact that Destiny has a slightly kitsch feel and that Terry Nation’s script is leavened by jokes, some of which are genuinely witty. Take, for example, the moment when the Doctor finds himself pinned under a fallen pillar and sends his companion, Romana for help. He decides to pass the time by reading a book called Origins of the Universe by Oolon Colluphid, retrieved from one of his (presumably voluminous) pockets. Unfortunately, this tome doesn’t impress our favourite Time Lord who complains that Colluphid gets “it wrong on the first line”, wondering aloud why the author didn’t just ask someone who saw it all happen (i.e. the Doctor himself). It’s wonderful stuff.
Doctor Who does owe a lot to Terry Nation as co-creator of the Daleks along with designer, Raymond Cusick. However, he can be a bit of a ‘by-the-numbers’ screenwriter who relies on action-adventure staples to pad out his work, such as ticking bombs, protagonists infected by radiation or disease, and lone women being stalked across desolate landscapes. I’m actually a big fan of this kind of escapist fare though, especially when it comes laced with a bit of silliness and fun. What I want from Doctor Who is to forget my travails and those of the world (particularly when the news cycle is so bleak). 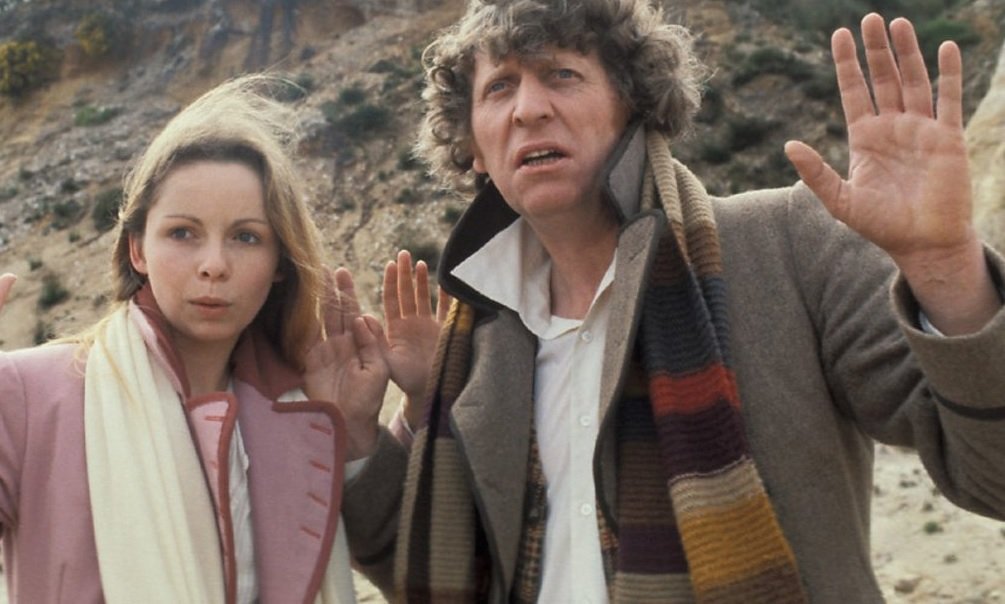 Another strength of this story is the TARDIS team. The Fourth Doctor is joined by the second incarnation of Romana and it’s obvious from the get-go that this pairing is going to work well. I’m a big fan of Mary Tamm’s version of Romana, but I’m glad Lalla Ward got a crack at the part too as she and Tom Baker spark off each other very well.
However, despite my fondness for Destiny of the Daleks, I do understand why it might not be some people’s cup of tea. There are moments when the silliness and fun could be seen as being over the top. These include the first scene, in which Romana tries on different bodies while regenerating and also when the Doctor mocks the Daleks for their inability to climb after him when he flees up a shaft.
The story also makes a big deal of the Daleks and Movellans being bound by logic while having a somewhat fuzzy grasp of that concept. Then there’s the fact that the Daleks are now described as robots (although the Doctor does reference their having previously had an organic component, so I don’t have a problem with this; maybe if Terry Nation had written more for Doctor Who, he would have developed this idea of the Daleks as a purely robotic species. Who knows?).
Destiny of the Daleks is one of my go-to Doctor Who DVD choices when my spirits need lifting. I would never seriously argue that it scales the dramatic heights of Genesis of the Daleks, which is a bonafide classic. However, it is an enjoyable action-adventure romp with a seam of comedy running through it… and that’s good enough for me!

by Matt Badham time to read: 4 min
Features 10 Reasons Why You Should Watch Blakes 7
Features Is It Time to Re-Evaluate The Time Monster?
0
%d bloggers like this: