Doctor Who: The Collection – Season 12 Delayed Again Until July?

Fans of the Fourth Doctor are sure to be disappointed to hear that Doctor Who: The Collection – Season 12 looks to have been delayed a further two weeks. This means we’ll have to wait until 2nd July 2018 to enjoy Tom Baker’s debut season on Blu-ray.
Doctor Who: The Collection – Season 12 collects together Robot, The Ark In Space, The Sontaran Experiment, Genesis of the Daleks, and Revenge of the Cybermen, for the first time upscaled for HD.
But it now looks like we’ll have to wait until July to see these adventures in higher definition – outlets including HMV, Zoom, Amazon UK, and Zavvi are now listing its release date as 2nd July 2018.
The delay comes as a big disappointment as it was originally due out today – 11th June 2018 – before a set back altered its date to 18th June. Now, it’s been pushed back a further fortnight. 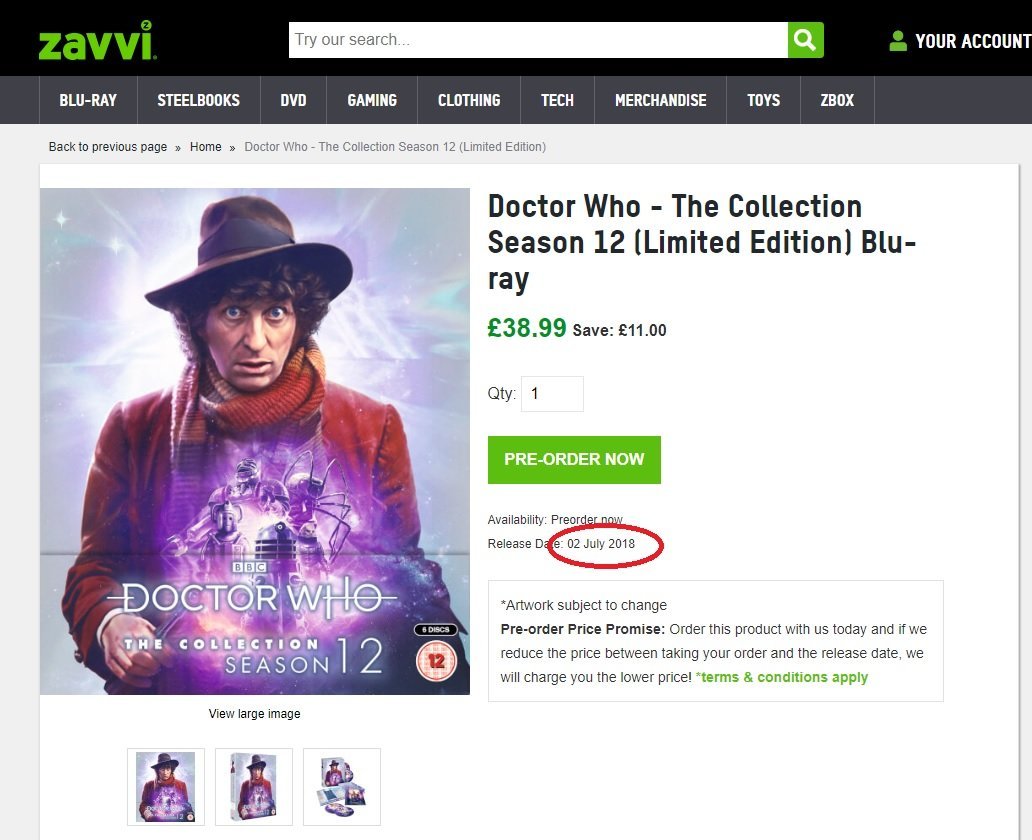 Why? We don’t really know, but we’re hoping it means two things: firstly, that demand has been so great that a larger run will need to be produced to fulfill pre-orders (thus almost certainly guaranteeing more box-sets in the future); and secondly, we’ll get some surprise extras. The latter is doubtful, however, as the discs are looking pretty packed already. Alongside all the original special features from the DVDs, Doctor Who: The Collection – Season 12 will also include:

Impressive, eh?
UPDATE: Thanks to DWC contributor, Joe Siegler, we now know the state of the US release: it’s still scheduled for 19th June in America. However, US consumers won’t get the Limited Edition packaging or additional booklet, so it’s possible that a production error with these has delayed the UK release.
Have you pre-ordered Doctor Who: The Collection – Season 12 yet? Or are you waiting to see it in shops when it actually is finally released?
Doctor Who: The Collection – Season 12 will be released on Blu-ray on Monday 2nd July 2018 (hopefully!) with an RRP of £39.99.

Doctor Who: The Collection – Season 12 Delayed Again Until July?

by Philip Bates time to read: 2 min
Merchandise Out Now: Doctor Who Magazine #527
Merchandise Enjoy Lethbridge-Stewart Tales on Kindle from Cand…
0
%d bloggers like this: