New Official Doctor Who Exhibition to Open in 2019? [UPDATED]

Update (19th November 2018): Since reporting that a new Doctor Who exhibition would open in Cardiff next year, the BBC has quashed these rumours, telling the Radio Times:

“There are no plans for a Doctor Who exhibition in Cardiff at present.”

The DWC has been contacted by an official representative of Live Events at BBC Studios about the following news article. We respect the BBC’s position, and we equally respect our readership – fans seem genuinely excited about even the potential of a Doctor Who Experience replacement, which should surely be the main thing we all take from this.
A new exhibition (which we relayed after other sources reported this supposed news) may not be happening, though we can but hope. We’ll keep you updated, as ever.
Original article (published 13th November 2018): Following the closure of the Doctor Who Experience last year, it’s been revealed that a new exhibition dedicated to the universe’s greatest science fiction show is set to open next year!
In association with Cardiff Council, BBC Studios is planning to hold the exhibition at Cardiff Castle, located in the city centre; presumably, one reason the Experience didn’t take in as much money as projected was because it was comparatively out the way. (However, it was by Roath Lock Studios, giving fans the chance to step into the actual TARDIS!)
Although we’re yet to learn any details about what the exhibition will consist of, we hope it will have elements similar to the superb Doctor Who Experience, which included an interactive adventure (the first, with the Eleventh Doctor, featuring a second version of the Pandorica; the second seeing fans running around the Twelfth Doctor’s damaged TARDIS) before visitors were let into a more traditional museum-like section with old costumes and props. There were also numerous TARDIS interiors, like the 2005-10 control room primarily used by the Ninth and Tenth Doctors.
The upcoming exhibition is due to be open by summer 2019. This does also hint that there will be some consistency behind the scenes on Doctor Who, at least if we presume the Thirteenth Doctor (Jodie Whittaker) will have some part in the event.

New Official Doctor Who Exhibition to Open in 2019? [UPDATED] 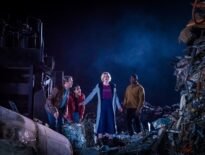