It’s been announced that Doctor Who Series 5 will be released as a steelbook, following previous special editions of Series 1, 2, 3, and 4, as well as the 2009 Specials. This is the first Matt Smith era release in the range, although a similar steelbook boxset was available in isolation, featuring the crack in time, back in 2010.

Doctor Who: The Complete Fifth Series steelbook Blu-Ray will feature new and exclusive artwork and is being released on Monday 10th February 2020.

Series Five welcomed the arrival of Matt Smith as the Eleventh Doctor and Karen Gillan as his new friend, Amy Pond.

After his explosive regeneration, the Doctor awakes to discover his TARDIS is about to crash. Pulling himself out of the wreckage, he comes face-to-face with Amy Pond and promises to take her on a journey to the stars. Boarding the TARDIS, Amy and the Doctor embark on a series of adventures that will change her life forever.

This set marks the 10th anniversary of these stories – pretty unbelievable, really!

Doctor Who: The Complete Fifth Series on Steelbook Blu-Ray is available to pre-order now and is being released on Monday 10th February 2020 at £35.73 RRP. 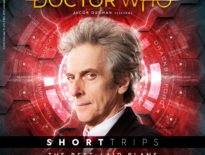