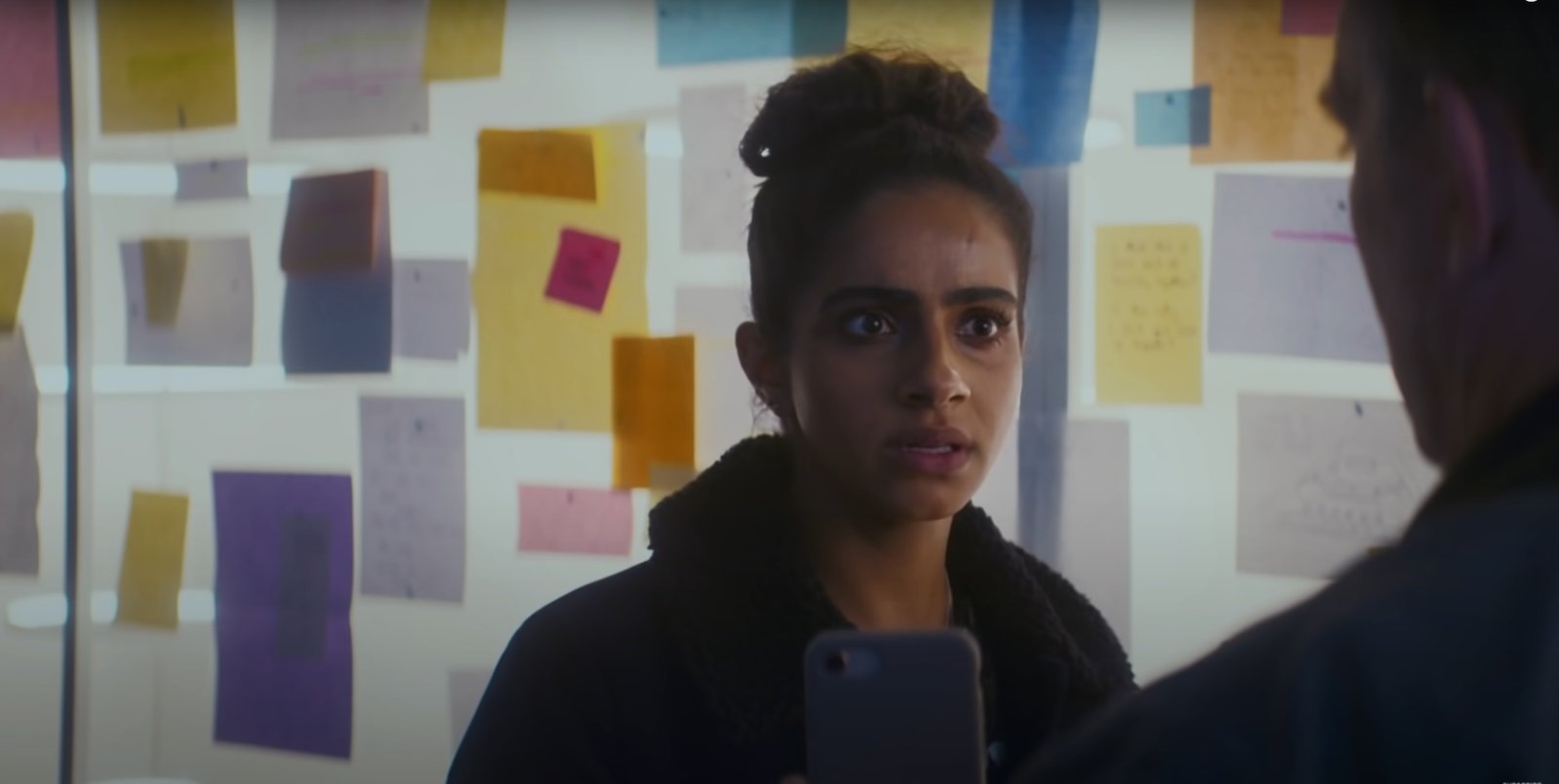 Started well, that sentence. You know how it is – we do not talk about it, but over the last few years Doctor Who fans have begun the slow, steady and irreversible descent into savagery. The absence of information has made us desperate, clinging to scraps and tidbits like vultures fighting over the last piece of carrion in the desert, or a couple of TV-hunting chavs in a Tesco on Black Friday. 10 seconds of Barrowman wrestling with a rubber prop and the internet literally explodes. Well, not literally. That would mean the destruction of Trans-Atlantic cables, which would look impressive on screen but probably frighten the fish. As for the rest: drones! Prison cells! The return of the house-shaped TARDIS! WHAT DOES IT ALL MEEEEANN?

Gentle reader, allow us at The Doctor Who Companion to guide you through this wilderness. Because we’ve been there, you see, and we’ve been up all night working on the subtleties and subliminals in the few precious seconds of footage the BBC graciously allowed us to witness. And it has cost us dear. Right now, the DWC offices are an emotionally ravaged, socially-distanced wasteland of the post-apocalyptic variety. Simon and Joe are arguing over the last pop tart. Tony is standing at the window, staring through a pair of binoculars, his chiseled features twisted into a permanent frown. And Phil is rocking back and forth, clutching his custom-designed Among Us plushy (it’s red, of course, but you knew that) and murmuring to himself between sobs: “The horror… the horror…”

And me? Well, I’m on borrowed time, because what I’m about to tell you is STRICTLY CONFIDENTIAL and not for public viewing (at least before January) and already, in the desolate valley below, I can hear the stomp of approaching jackboots. They are coming and we cannot get out. Based on wind speed and my knowledge of the area I think I have about half an hour, which gives me just about long enough to scribble down all the secrets and revelations that await you come the… well. You know. The Revolution.

We will start with this:

You’re going to have to excuse the heavy filtering I put across this one, but it’s the best way to showcase the numbers. You know how many tally marks there are? 310, fully or at least partially visible. I know because I have counted. Episode 310 of Doctor Who is Part Three of The Curse of Peladon, in which Pertwee hypnotises a costumed monster by singing to it. Did we mention that Jodie Whittaker can sing? Is it a coincidence that the letters of ‘Peladon’ can be rearranged to form ‘Pond ale’?

No, it isn’t. You will learn precisely why later on: for now, there’s more. Taken backwards, the number 310 reads 013 – or, if you like, 0-13. This is a story about the Thirteenth Doctor… but what could that zero possibly refer to? A pre-Hartnell Doctor, perhaps? One we might have met quite recently? One who’s probably going to get her own Big Finish box set before they come up with a working Covid vaccine?

A brief but important sidetrack follows. 0-13 was the score in a recent football match that took place between VVV Venlo and Ajax – and Ajax, need I remind you, plays out of Amsterdam, a city visited by the Fifth Doctor in Arc of Infinity, where they ran into Omega. To quote a Methodist preacher I knew who was renowned for his 50-minute sermons, that’s an important point and I’m going to come back to it later on.

Still, we don’t have time to linger just now, because we must instead look at the impressive collection of post-its that Yaz has affixed to the wall of what we assume is the borrowed house TARDIS, as first seen in The Timeless Children.

Leaving aside some rather obvious gags about redecorating, we might do well to concentrate on the actual layout of these notes and their placement upon the wall. Because nothing, you see, is left to chance in these things. It only seems that way. My man in Havana, for example, tells me that the BBC keep a designated bunch of ‘clue droppers’ on standby to come and rearrange the set between takes, in order to maximise fan theory potential and get the internet buzzing and public interest well and truly piqued. Most of them are unpaid interns, but they get free polo shirts and a photo op with Bradley Walsh, so everyone’s happy.

To make sense of this, you need to focus. Those jagged white lines on the left and right? That’s a clue – they’re arrows. That’s your start point. The console gets in the way a little bit, as does the other wall, but examining the paper arrangement from left to right, we can just about make out this.

There is a theme developing here. Don’t worry if you have yet to spot it; you’ll know by the end, even if I’m not here to share it with you.

“You say you wanna revo-luu-shon, we-ell, you know…” Phil is singing again, a melancholy dirge as the kitchen tap drips lemonade. I can still hear the boots. I’m getting distracted. Let’s look at this fleeting shot of the Doctor in her prison cell.

We may solve this particular conundrum by counting the bars, and also by looking at where Jodie Whittaker is positioned. It goes without saying that the first two bars correspond with Hartnell and Troughton, given that they are slanted to the left, indicating the years the show was broadcast in black and white because the Doctor was supposedly colour blind which was a god-awful stupid idea. Pertwee follows – his strictly vertical slant embodying the exile that dogged much of his run. Whittaker, therefore, is positioned between Pertwee and Baker. But look at her hands – palms flat, stretched between bars, as if pulling them together, searching for a common link. And what is that common link, you may ask? Well, you may ask. Go on, ask. Then I can —

What’s that? What? No, Frank. No, you can’t use the computer. Yes, I know it’s the only working one we’ve got. Can’t you play Minesweeper on your phone? Your phone, Frank. That black thing you – no, that’s a stapler. No, it’s not a – no, don’t. Don’t put that to your ear, Frank, just – Frank! God almighty.

Where was I? Yes. Yaz’s ears. You see one of them very briefly, in the second before she turns to the camera and yells “Now, Jack!” And it’s the piercings I want you to look at here, because they’re ripe with symbolism. For the sake of clarity I’ve annotated the image:

Need I remind you that both the above featured renegade Time Lords, and faceless creatures? That one of the renegade Time Lords also featured in a story THAT WE’VE ALREADY MENTIONED? That the stories feature the first five Doctors, also mentioned earlier? That if you add the numbers 1, 2, 3, 4, and 5 together, you get 15, which is the total number of canonical on-screen Doctors we have thus far seen on television, including both the War Doctor and Ruth Doctor? Do you see where this is going? Have you worked out the series’ next Big Bad yet?

Those footsteps are getting closer. We really don’t have long. I’ve sent the others down the fire escape, where it is hoped they will be able to reach safety, and hopefully that vending machine up the street that serves Pot Noodles. I shall await my inevitable oblivion but I have time to tell you one more thing: you’ll have seen from the trailer that Chris Noth is back, once more playing the outwardly despicable (but morally upstanding) Jack Robertson, no doubt involved in one of those hair-brained schemes that involve humans thinking they can control Daleks. I’m calling it: death ray, 16 minutes from the end.

But did you know that ‘Jack Robertson’ may be rearranged to form ‘Rose Jock Brant’? Can I also point out that John Barrowman hails from Glasgow, and that he and Billie Piper travelled with the Ninth Doctor? Can I point out that a ‘Brant’ is a type of goose, and that geese frequent ponds and lakes, drinking the water therein, anecdotally referred to as ‘pond ale’? Can I further point out that ‘Brant’ is derived from the old Norse brandgás, meaning ‘burnt / black goose’? Can I additionally point out that the War Doctor, describing at least two of his successors, once said that ‘Great men are forged in fire’? Can I also remind you that Billie Piper was in that one as well, playing a character who took the form of Rose?

And if that weren’t enough signposting, can I just point out what happens if you watch this trailer on YouTube with closed captions? 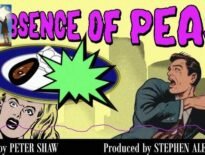 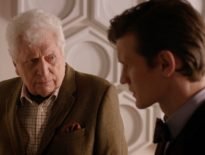