Doctor Who in an Exciting Adventure With… Pirates? Where are all the pirates?

No, I’m not talking about the people who leaked the unfinished version of Rose onto the internet. Why? Because I aaaaaaaren’t. You got that, land lover?

Jokes aside, you may have guessed that I am, in fact, talking about the crooked sailors of legend. You know – Davy Jones. Jack Sparrow. Captain Hook. The world of plank-walkers and talking parrots and gold doubloons. This is territory that – thus far – Doctor Who has largely avoided.

We do, of course, have The Space Pirates from 1969. Now, this story is largely missing from the BBC archives, and it’s unique in the fact that it’s the one story that almost no one wants back. Why? Because it’s pretty dull, that’s why, and the Doctor’s hardly in it. (I’ve written more about this over on the Lovarzi blog, in fact.)

The Space Pirates is doubly unusual in that it’s written by Robert Holmes, who is perhaps one of Doctor Who’s most popular and accomplished writers, although I think he may have been dozing below decks when he cranked this one out. Suffice it to say, Doctor Who hardly touched the subject of pirates thereafter, but whether this was down to The Space Pirates’ somewhat ‘soporific’ nature, or not, we may never know.

Indeed, it wasn’t until the Eleventh Doctor adventure, The Curse of the Black Spot that we finally got to sail the seven seas like a salty dog, wi’ Captain Avery and crew becalmed in a swirling mist. This time, though, the episode wasn’t half bad. Yes, it unashamedly drew on every overused pirate cliché in history, but it also told a ripping science fiction yarn that (spoiler alert) ended up with half the cast being beamed to an alien spaceship. Captain Hook never had this problem.

But is it necessarily a bad thing that, in the last 57 years, we’ve only had a handful of pirate stories? By my reckoning, we’ve had four: The Smugglers (1966); The Space Pirates (1969); The Pirate Planet (1978); and The Curse of the Black Spot (2011). Now, this is definitely bad news if you’re a fan of skull-and-cross-bone flags and crack Jenny’s teacups, but to be honest if you watch Doctor Who in the weekly hope of hardcore boating action, you should probably buy a barge. Or watch Titanic.

I think the problem is that there are only so many stories to tell within this genre (is ‘pirate’ a genre?). The Pirates of the Caribbean movie franchise proved this in a very long and painful way with its six part ‘trilogy’ that somehow managed to go everywhere and nowhere across its 15-or-so hours of, ahem, action. You’re on a boat. You steal things. You run away. You steal more things. There’s a storm. There’s a mutiny. There’s another storm. There’s probably a treasure map, somewhere.

On top of this, boats offer a very limited setting and don’t exactly lend themselves to a wide range of story possibilities, unless you’re Rosie and Jim, who (impressively) kept their series afloat for some 175 episodes over a 10 year period. Google them.

And even if you use ‘boats’ in the figurative sense and make the vehicle a spaceship or (another spoiler alert) an entire planet – a la Douglas Adams in The Pirate Planet – you’re still constrained by the aforementioned conventions. There’s only so much looting and timber-shivering you can do before you long for dry land.

So with Doctor Who, the occasional pirate story is fine. 1966’s The Smugglers is perhaps the first of its kind, telling the story of Captain Pike and his search for buried treasure in 17th Century Cornwall. And then you have a sequel-of-sorts some 45 years later with The Curse of the Black Spot which, again, is a fairly traditional, swashbuckling affair – until they all start teleporting places.

Robert Holmes and Douglas Adams filled the space in between with their more science fiction takes on the genre – penning The Space Pirates and The Pirate Planet respectively – but beyond these four stories, I’m not sure what else the Whoniverse can do. Honestly, I don’t think there are many more tales to tell – not within the strict confines of the pirating medium, anyway. I did momentarily wonder what it would be like if you could have sailing ships charging through the blackness of space (space ship, geddit?) but even this has been done in 1983’s Enlightenment.

So is Doctor Who done with the pirate genre? Not necessarily. Maybe for a while. Give it a decade or two, and the future showrunner (me, hopefully) will be sitting wistfully at the writing desk, before turning to his resident parrot and going, “Argh, we’ve not had a pirate story for 45 years!” at which point, he’ll then scramble for the quill and ink. Admittedly, it will probably be just like every other pirate story that’s come before, but enough time will have passed that nobody really cares. The Curse of the Black Spot – even though it’s nine years old now – still seems too recent. We need to give it longer.

I could be wrong, though. Maybe there’s still more for Doctor Who to discover in the world of pirates. What about an exciting new mash-up? Jago and Litefoot and Strax and Blackbeard? Torchwood: Sex Ahoy? Or a Big Finish box set telling Mr Fibuli’s origin story? Shut up and take my doubloons.

Would you like to see more pirate-based Doctor Who stories? Or is the Whoniverse done telling tales of the seven seas? Let me know in the comments below, me hearties.

Doctor Who in an Exciting Adventure With… Pirates? 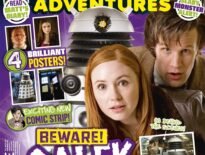 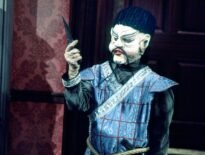