I stumbled into a time eddy this morning, which brought me back to 2016 and an early, quite lovely article by Jonathan Appleton about what might have happened to the Master after The End of Time.

In it, he reminds us of how the drums in the John Simm Master’s head were the impetus for his madness, being put there by Rassilon, he of the excess saliva. And this was not only a salient point, but something that should be considered when one complains about Simm’s performance as being “too crazy”.

I myself have been guilty of this. I never really liked Simm’s performance precisely because of the goofy crazy thrown out there. That, and I simply don’t like the way he tears into dinner fowl.

But in the end, there is the perfectly reasonable explanation of the drums. It actually does help one forgive some of the crazy. One might wonder though… how Simm might have played him without the drums.

Now, he did return in World Enough and Time/ The Doctor Falls, and to be honest, it’s just now, this minute, where I find myself wondering — was that the Simm Master without the drums? Probably! During the rooftop confrontation, it’s mentioned that this happens after The End of Time, so it makes sense that this Master is now without the drumbeat.

In all the commotion with Missy, Bill, the Cybermen… I never gave it any thought. Mostly, I was just irritated that the BBC screwed up the reveal like usual. But even though he was suitably evil and sadistic, he didn’t seem nearly as loony, and I’ll wager it was a joint decision by Simm and Moffat to tone it down a tad.

But I guess the big point here is sometimes we forget that his craziness had a good reason for existing. It wasn’t just the actor yearning to play a ridiculous loon.

Which got me to thinking (sorry).

First, Michelle Gomez wasn’t playing Missy as a raving loon. It was more of an eccentric, flighty, evil take. It was well balanced enough, and she broke into dark moments to give a really solid performance. She’s easily my favorite incarnation since Delgado. And so…

Now. It’s this next bit of reasoning and logic in this particular arena, with a particular creator, that is always confounding. Because even though I should know better, I often give Chibnall too much credit for logic and good ideas. Typically, he usually just rehashes ideas from past showrunners.

The Sacha Dhawan Master is bat-s**t crazy. A raving mad dog, who goes around destroying Gallifrey (again), and all the Time Lords (again). He’s on par with the Joker from DC comics; he even dresses like him a bit. Is that just Chibnall seeing the Joaquin Phoenix film and borrowing yet again, or is there actually a reason for this latest bout of insanity?

One could point to the Master finding out about the Time Lord’s dirty little secret, the horrific events and origins of the Timeless Child. Okay, that’s more than enough reason to be angry. Furious even. That is villainy and deception on a scale that dwarves anything the Master’s ever done. The Time Lords are, without a doubt, creeps. At least, those that are privy to the actual story.

But being furiously angry is not the same as being insane as a fruit loop. No, finding out the atrocities committed by the Time Lords, I completely understand the Master being so filled with righteous anger and tumultuous fury, that it wouldn’t surprise me if he destroyed Gallifrey and everyone on it.

He probably even had his feelings hurt. But being doolally, wide eyed gonzo? Hmmm, I think that takes another added reason.

I think the real reason he snapped is because he found out he was actually the Timeless Child. It makes perfect sense to me, but there are certain logical pathways, certain conclusions, that I’m not sure Chibnall subscribes to like I do. Mind you, he’s in charge. I’m just a fan.

I guess I look at it this way: if I suddenly found out that I was a totally different person to the one I thought I was, from another, unknown place of origin, was a tortured, child science experiment, and that I was billions of years old and can never ever ever ever know the sweet release of death?

After millions of incarnations, over billions of years, I don’t think I, you, or anyone, could possibly have any stable sense of who or what they exactly are. One’s sense of self, of being, their identity cast adrift in an ocean of “me”s. At best, your grasp of reality would be challenged.

I think I’d most likely go crazy. Stark raving bonkers. Like the Master.

Not business as usual, like the Doctor, moping in a cell I can’t seem to break out of for the first time in ever. I’m sure someone will save me.

But my point is, there has to be a reason for the Master to go slobberingly insane, not just because Sacha wants to stretch his acting skills. That would be… nuts. 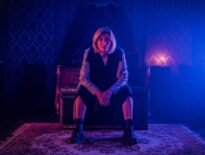 Features The Fourteenth Doctor: Who’s Favourite to Re… 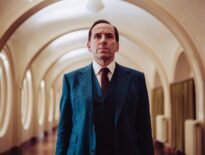