For the record, when I first heard about a woman being cast as the Doctor, several thoughts sprang to mind. First, I just knew the torches and pitchforks would come out — and they did. There was a lot of foaming at the mouth. If they did this right after Tom Baker left, we would have been well over this by now.

On the flip side, there were brigades of women rejoicing, some of whom would demand everyone be as euphorias as they were. I was in the middle, being wary about them being able to just pull this off.

But if the new showrunner coming in was worth his salt, a quality writer would cast a winner and after a short breaking-in period, we’d get back to business as usual. But it was Chris Chibnall, he of the Cyberwoman and Broadchurch fame.

I did feel some glimmer of hope though, as Chibnall wrote the Silurian two parter for Matt Smith’s Doctor (The Hungry Earth/ Cold Blood) and Dinosaurs on a Spaceship. I figured, well, as long as he can write decent Doctor Who, we should be good. I realized later that Steven Moffat heavily rewrote everything I thought I liked of Chibnall’s work.

Instead of an exhaustive casting search to find the right woman for the most momentous regeneration in the HISTORY of the show, he grabbed Jodie Whittaker from the set of Broadchurch.

But not being that familiar with her work, I figured let’s see what they do. They brought together a truly diverse TARDIS team. There was a tonne of potential here. A police officer on the team? Excellent! Think about how handy she could be in many situations — it would be like the good old days when Ian Chesterton took someone down with judo!

There being four members of the crew, the possibilities for interpersonal relationships and character building would potentially be the highest since the very beginning with William Hartnell. Bottom line, there was so, so, so much potential.

The first episode was actually decent. At the end, I thought, yeah, this had definite possibilities.

Then the rest of Series 11 was mostly a mess, with some stories having good potential for pure historicals ruined by tacked on, lame sci fi. Others were just a silly mess, sometimes descending into Scooby Doo or CBBC remedial antics.

Any potential for the companions, especially Yaz, was ignored and wasted. For such a progressive showrunner, Chibnall tended to give the vast majority of his writing love and character development to the middle aged white guy. The two women and the black guy were left out in the cold. Or maybe Bradley Walsh was the stand-out actor of the bunch.

Series 12 was a step up, with some informative historical scripts and surprise mysteries. Unfortunately, the bulk of the series got bogged down in even more heavy handed preaching, lecturing, the Doctor becoming more unlikable — especially toward her companions, who were becoming jokes she treated like pets instead of family. It ended with the biggest load of tripe in the muddled, cliched, poorly-told tale of the Timeless Child.

I kept hoping, and he kept disappointing. Even now, I hold out hope against hope that even after the dreck, he can still somehow stick the landing with Series 13 — but I’m a hopeful idiot.

I had heard rumours a while back that Chibnall was staying on while Jodie was leaving. This saddened me greatly. I wish that it had been the reverse, as I would really have liked to see how Jodie would do under a skilled showrunner. Chibnall was the one who advised Jodie to do no homework for the part. That’s why she played the part like Doc Brown with a Harry Potter wand. She deserved better.

But now, Chibnall is leaving, after a six episode Series 13 in late 2021 and three specials in 2022, the final year in Chibnall’s five-year contract. In the end, over a full five year period, 60 MONTHS, he will have given us a total of 30 episodes. Most of them, unfortunately subpar and insulting. But he’s leaving. Good odds on the replacement being as good or better.

And I’m not going apologise for it.

Features You Are The New Showrunner: How Would YOU Change D… 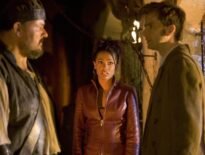