Title and Synopsis Released for Doctor Who: Flux Episode Three The titles for this series of Doctor Who haven’t been excessively forthcoming; so we’re only just learning the individual episode title of part 3 of Flux, which is due to air on 14th November.

Episode 3 of Doctor Who: Flux is called… Once, Upon Time!

That’s the first episode to have a comma in its title since The Doctor, the Widow and the Wardrobe back in 2011. Yes, 10 whole years ago (give or take about a month).

Once, Upon Time is the first Doctor Who story to be directed by Azhur Saleem, the previous installments of Flux having been helmed by Jamie Magnus Stone. Saleem will then return for the final two episodes of Doctor Who Series 13.

So what is Once, Upon Time about? I’m glad you asked. Here’s the synopsis:

“Time is beginning to run wild”.

On a planet that shouldn’t exist, in the aftermath of apocalypse, the Doctor, Dan, Yaz, and Vinder face a battle to survive.

Okay, it is very brief, but we’ll learn more after War of the Sontarans airs this Sunday.

Title and Synopsis Released for Doctor Who: Flux Episode Three 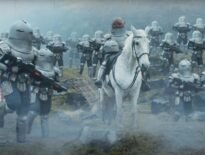 News Check Out the Trailer and Synopsis for Doctor Who:…