It’s only a matter of days since Flux concluded, but attention is already turning to the next episode of Doctor Who, Eve of the Daleks, set for a New Year’s Day premiere.

So what’s in store for the Doctor, Yaz, and Dan? A brief trailer screened after the conclusion of The Vanquishers suggested we can expect a smaller scale, more intimate adventure than the galaxy-spanning Flux, with guest characters Sarah (Aisling Bea) and Nick (Adjani Salmon) facing, as has become the tradition at this time of year, an incursion by Skaro’s finest.

Showrunner Chris Chibnall has trailed the episode as “a romantic comedy where the obstacle to the romance is not only the characters themselves, but the threat of Daleks”.

It’s the first time since the 1996 TV Movie that a Doctor Who story has been set on New Year’s Eve, and it seems that date will form a key part of the plot, with the official synopsis teasing:

“Sarah owns and runs ELF storage, and Nick is a customer who visits his unit every year on New Year’s Eve. This year, however, their night turns out to be a little different than planned as they find themselves joining forces with the Doctor, Dan, and Yaz in a fight against the Daleks.”

That trailer also indicated what the synopsis has confirmed – that our heroes are stuck a terrifying time loop (is there any other kind?), causing events to play out repeatedly (and not just because they’re facing the Daleks at New Year for the third year in a row).

Those who follow every tweak to the classic Dalek design (Character Options designers will surely be watching with their fingers hovering over the freeze-frame button) will be interested to know there’s a new variation on the egg whisk-style gun of old – a chunky, revolving piece of kit designed to deliver energy bolts more quickly. And perhaps more accurately too, if that clip of the Doctor and friends being turned negative is anything to go by…

Eve of the Daleks will screen on BBC1 and BBC America on 1st January 2022. 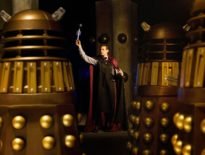 News Check Out Matt Smith in This Year’s Julia Do… 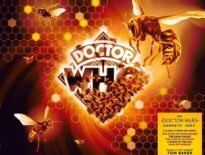