The Limited Edition release of Masterful is, well, masterful.

For eight discs and nine whole hours, you get to revel in almost every era of the Master in their broadcast form. All the delicious evilness, the madness, the cruelty, even the good looks. It’s all there.

Encased in the Limited Edition is four stories: the titular Masterful; three-hour epic Terror of the Master; and Short Trips I Am the Master and The Switching which have both been available as download-only releases in the past. All four are top quality stuff.

Let’s begin with James Goss’ Master-based epic Masterful, which brings together eight incarnations of the Master (and a possessed Kamelion) to celebrate 50 years since his first television appearance in Doctor Who. Across three episodes, there is a good bit of storyline given to each incarnation, normally partnered with another to help chew delightfully through the dialogue, and somehow, after three hours, it all comes back together as one coherent ending with a confrontation between the main character, singular.

The first episode establishes a very strong musical base for when the Masters are all together, and you can’t help but grin as each incarnation is introduced and the actors get to let rip. It’s like a party. Actually, it is a party!

John Simm’s Saxon Master is the most deranged, but seemingly the most successful as he summons his past selves to celebrate becoming the Master of all. It does sound odd at first to hear Simm back in the role, especially when the potency of his previous performances have seemed to live or die on if he was menacing the Doctor and their associates or just shouting at strangers. When you’re playing total insanity, or bearded insanity as in The Doctor Falls, then conversations can sound disjointed unless you have a script that gives the opposing actor (and a high quality one, too) the material that makes conversation believable.

When all the Masters are together at first, you can hear where all of the other incarnations can make connections with each other, even Missy, while the Saxon Master is isolated. And to be fair to him, he’s summoned himself to a party with karaoke; if I were his younger self, I would be a bit wary of getting too close.

But the power dynamics and untrustworthiness between selves makes sense, because the new series Masters really did things in the name of the Time War that the Classic series incarnations wouldn’t even consider. They got to a point where the Master committed so much evil that he became detached from his own life, and then deranged. Maybe one day they will be in a position where they want to do something about their past. Spoilers.

All of the actors playing the Master are on top form from the off, and when Jo Grant gets timescooped into proceedings – it’s her 50th anniversary too – we get a character who could kill with kindness being pitted against a multitude who would actually kill for the opposite.

Missy arrives after Jo, and once again Big Finish has her played excessively for comedy rather than laying down dramatic potential. She basically announces her presence with a Borat impression and, unless mistaken, a name-drop of John Dorney. And the Saxon Master is clearly not impressed: he’s convinced his ultimate victory means he will never become Missy. Does he know…?

With the newer incarnations not as chummy as the others are – which includes a young first incarnation brilliantly acted by Milo Parker (The Durrells) – it then comes to one of them deciding to zap them all away to get the plot properly moving along. Party’s over – now for the gritty evil stuff.

Alex Macqueen’s bald Master wakes up on a spaceship, Sir Derek Jacobi’s War Master ends up by a galactic barrier, Jo is left with poor Kamelion, and as the cover reveals, an alternative version of the Master lands with Missy. It’s very smooth.

And if that’s not crazy enough, the crispy burned out Master portrayed by Geoffrey Beevers finds himself on a world with a woman who thinks he’s rather good looking. Not to judge by appearances, but by seeing what’s on the inside, surely this woman must know the Master is not a man to have a crush on.

Almost all of them are in situations or places they’re uncomfortable with, for very different – but possibly linked – reasons, and the episode ends on a cliffhanger.

The next episode begins with the Masters all getting straight into action in their respective settings, with our double acts being set up. We have Jo being joined by Missy, immediate predecessor/successors War and Saxon together (Simm never got to meet Jacobi during their regeneration scene, so there is much behind-the-scenes love to be shared here), the ‘Bruce’ Master coming to tease the crispy ‘Jeremy’ burned Master about his supposed good looks, and the young Master lands in the same spaceship as the bald Master.

Each combination works really well, and it can’t be said enough how much of a coup it’s been for Big Finish to get Eric Roberts back in the role of ‘Bruce’. Following up his appearance in the Eighth Doctor and River Song ranges, Roberts gets to delight in this role that he’s had a longer break in playing than any of the other actors.

The overarching plot starts appearing in this episode, but it doesn’t immediately commit to which of the Masters is primarily at fault for the drama that is about to occur and it’s left for Jo to basically ask the questions for the audience on what’s connecting everything. Her relationship with Missy is strong, and the ‘Jeremy’/’Bruce’ dynamic is also strong, but the winning combination in here has to be Parker and McQueen on their spaceship. It’s narrowly ahead as the strongest for character development, and has a natural connection (the pair worked together on television not long before the recording of Masterful).

A looming threat hangs over the start of episode three, but there is also humour as Simm gets to deliver the brilliant line “don’t go looking at me like I’m a yellow-stickered sandwich” and Roberts says one of the greatest challenges in the universe is putting a cover on a duvet.

The set-up for how the various Masters are reunited is more focused on analysing the Time Lord rather than the action of the previous episodes, but it shows how scheming the character is and just how impactful they are on their universe and on ours as a fictional character.

Missy’s redemption storyline isn’t explicitly mentioned, but her involvement in tying up the plot shows how complex Michelle Gomez’s incarnation is when not played for laughs, and she’s there at the final showdown where only the Master can win. Or lose. Or both.

James Goss does a brilliant job to take you from this multi-Master party to out into the stars and then back into a single-room setting for the climax after three hours and lots of cutting back and forth between various incarnations. You are getting lots of masterful action here.

Perhaps even better than that, though, as a three-hour epic is Trevor Baxendale’s Terror of the Master audiobook, which is performed entirely by Jon Culshaw. If you told me this was a missing TV story, I would be utterly convinced because this is a pitch-perfect end-of-season 10 story.

Episode one begins in true contemporary style with a grisly death in an isolated setting on screen, and then the Roger Delgado version of the Master (or Sacha Dhawan’s in disguise, it’s not ruled out) walking onto the scene clapping slowly. Insert evil laughter here.

And then we’re off to UNIT, and straight into a two-walled studio where all the characters have to fit in one cut. There’s a man on the television and he’s promising to revolutionise the UK energy industry, moving away from fossil fuels, and the Doctor is immediately suspicious. Only one man could have such sustainable motivations: the Master!

Jo has left the Third Doctor, but he remains at UNIT despite clearly having also moved on mentally from the organisation, and instead tinkers with his cars to no end. As a result, we have a proto-companion, Daisy, introduced. Naturally, I didn’t have my hopes up that she would be a long-term addition to the Doctor’s life.

The Doctor goes to BBC Television Centre itself to confront the man behind the boldest claims on TV, Dr Derek Drake, and probes him on if he knows the Master. The outcome doesn’t please the Doctor, and he departs not only in a quizzical mood, but on one hell of a high-budget cliffhanger.

Episode two begins – as it well should! – with a re-run of the cliffhanger to refresh the viewers’ minds from last week. There is a slow reveal of the Master’s true involvement in proceedings, as the emphasis is on the Third Doctor being an all-action hero here, with UNIT’s presence sustained using guns and explosions too. As a result, the Master arguably gets the best bits throughout, including the lead-in to the final episode where his alien-involving master plan is set to come to fruition.

The finale mostly acts as one long sequence at a power station, and it’s cinematic in its high stakes as well as its direction (there’s a superb rooftop stand-off). Thinking of all the great Doctor versus Master moments on television and audio, this is right up there. It feels simultaneously like it’s been plucked out of a cherished childhood memory, a conglomeration of a TV episode and a Terrance Dicks novelisation; it just feels right, and hints at the character development the revived television show gave the Master too.

Culshaw felt very lucky to be narrating, and so should the listener. The only real critique is because the Doctor and the Master get so much action, some of the supporting characters are probably given too little attention, but at the same time they are also framed mostly as homogenous military types besides Daisy.

The first of the Short Trips is Beevers’ own I Am the Master, which is a brilliantly meta character study of his incarnation that shows not only great depth of understanding in the Master’s motivations, but also in the systems he manipulates. It’s almost like listening to a real-world politician at times, and is another of those Big Finish audios that suddenly feel more timely during this lockdown period. Particular highlights from this one? Referencing the Thirteenth Doctor (or another female incarnation), appearing on Masterchef, and just some absolutely brilliant one-liners. Not all of them are there to create a sly smile, and Beevers’ to-the-point take on the meaning of evil is superb. You have to listen to it again and again.

The Switching returns to the Delgado incarnation, and goes through a day where the Doctor and the Master bodyswap. It started off as part of a short story anthology book, but was then picked up for audio adaptation. Narrator, Duncan Wisbey does a good job with an occasionally violent look at the differences between the Doctor and his arch-nemesis.

To get the Limited Edition version of Masterful is twice the price of the release that only includes the titular tale, but with Terror of the Master not set to be released in any other form, it’s worth getting the full package.

Masterful is available now from Big Finish as both a Limited Edition or Standard Edition; the latter doesn’t include the two Short Trips or Terror of the Master, however. 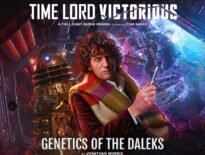 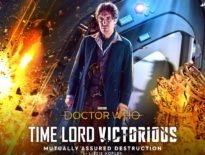