Every Christmas is First Christmas: The Importance of the Festive Specials

As the 2014 festive special went to great pains to teach us people get together at Christmas because they might not make it to the next one. It’s a grim thought and not one entirely true: surely life itself isn’t precious because it ends? Nonetheless, it reflects the morose attitude of many folk after a few sherries, and somehow feels right coming straight after the deathly overtones of Series 8.
Still, if every Christmas is Last Christmas, it’s also First Christmas. In the general positive spirit of Doctor Who, we must remember that it’s always someone’s first Christmas too.
And that sentiment extends to viewers as well: this is the importance of the Doctor Who Christmas special. It’s someone’s first experience of the show.
Of course, you could argue that it’s true of every episode, but let’s consider the inflated viewing figures that Christmas Day (and New Year’s Day) boasts. Despite sensationalist headlines, Doctor Who typically attracts an impressive audience, but there’s a noticeable increase at Christmas.
This is a time when family gather around, fresh from turkey, tinsel, and tipples, and argue whether to watch BBC1 or Downton Abbey. Television schedules are jam-packed during the season: this is a chance for channels to showcase their best shows and hook new viewers.
Until Last Christmas, Doctor Who‘s festive specials were watched by over 10 million viewers. While The Christmas Invasion and The Runaway Bride got 9.84m and 9.35m (still very respectable figures), between 2008 and 2013, only 2012’s The Snowmen got below 10m – just. Its final figure was 9.87m. Sadly, Last Christmas got 8.28m and The Husbands of River Song 7.69m; we’ve all read the doomsayer articles about how overnights for Series 9 were atrocious, but overnights mean nothing and final figures don’t accommodate for iPlayer. These inflated figures mean Christmas is the perfect chance to intrigue, to entertain, and to otherwise hook new viewers. Christmas is a time for pulling out all the stops. But does it work?
The festivities actually prove to be tent poles, with audience figures reasonably high at the start and tail-end of each series but sagging in the middle. Unfortunately, it’s difficult to assess whether people are sufficiently grabbed by the specials, enough to make them give a whole series a try. Figures at the end of each run certainly swell because people want to see the conclusion of an arc.
A fair test, then, would be how steady viewing figures are at the start of a series. Series 1- 5 all aired in the spring (as did Series 7b), while Series 6 was split between spring and autumn.
Much has been said about the decision to move Doctor Who to later on in the year: some would argue the gritty tales designed to instil fear are enhanced by the early drawing in of night-time; judging from viewing figures, however, there does appear to be an increase in the spring. It seems the Christmas specials have a sort of knock-on effect, whetting our appetites for new adventures. But if the main run airs in the autumn, the enhanced interest of casual viewers looks to have waned somewhat.
Whether the tactic works is entirely up for debate, but writers of Christmas specials (of the revived series, that’s only Russell T. Davies and Steven Moffat, discounting Mark Gatiss’ The Unquiet Dead because it aired in April 2005) must still cater for that bigger audience. It’s something Chris Chibnall will have to bear in mind too.
What does that mean? An engaging story, yes; one that’s suitable for all the family, undoubtedly. Should it also steer relatively clear of heavy continuity, so as not to exclude any newcomers? Judging from the evidence, maybe not.
That’s a surprising conclusion, but consider what has aired at Christmas: The End of Time, and The Time of the Doctor both featured regeneration; The Christmas Invasion and The Next Doctor required varying degrees of knowledge about regeneration; The Runaway Bride and The Snowmen recalled events from the previous run of episodes, as did Last Christmas (perhaps none to the detriment of the tale); and The Husbands of River Song tied up a character’s arc that began in 2008! 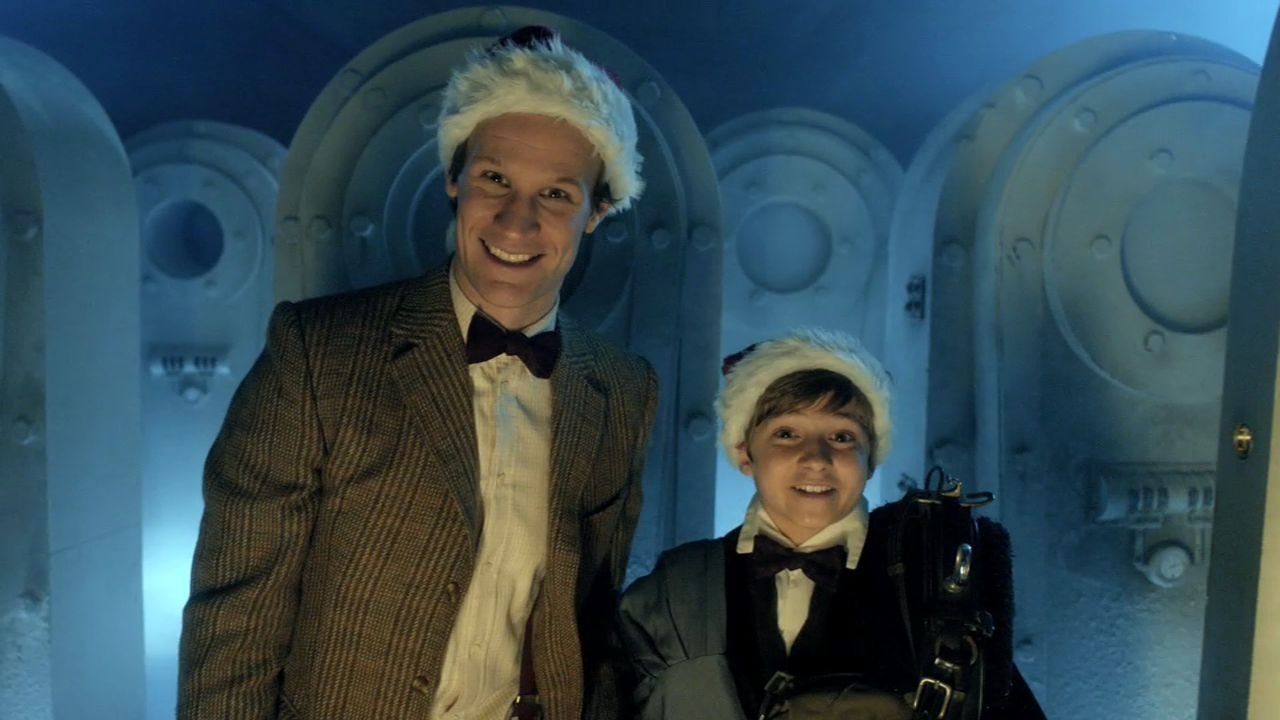 Only Voyage of the Damned, A Christmas Carol, and The Doctor, the Widow, and the Wardrobe are relatively free from the baggage of what came before. These three specials attracted incredibly impressive figures. 10.77m watched the 2011 special, and 12.11m watched the Eleventh Doctor’s first festive offering.
Voyage of the Damned remains the most-watched episode of Doctor Who since 1979’s City of Death. Did 13.31m tune in because they love a disaster movie at Christmastime, or did they merely want to see Kylie Minogue alongside the Tenth Doctor? Well, who can say?
It’d be ignorant, however, to argue that the success of these three stories proves 25th December should be continuity-free. Because the show attracts huge figures, no matter what. Look at the figures for the other Tenth and Eleventh Doctor stories. The Next Doctor got 13.10m!
And of course regeneration isn’t seen as something to put people off. Folk want to see the last days of each incarnation. That’s why The End of Time: Part Two was seen by 12.27m, and The Time of the Doctor by 11.14m. Regeneration is a part of Doctor Who mythos that’s particularly well-known. Continuity, especially when it comes to the Doctor himself, might not be completely ignored at Christmas after all.
Regardless, it remains clear: Doctor Who is a key part of the nation’s Christmas. Back in 1965, The Feast of Steven was a rare treat, but now we expect the TARDIS to materialise on 25th December. And that’s why it’s special.
It needs to blow people out of the water. It needs to impress. It needs to be exactly what it pertains to be: special. These sorts of things are viewed as trivial, something to pass the time, but attitudes need to change. With typically bigger audiences, Doctor Who should grab fans, casual viewers, and complete newcomers by the lapels and drag them into all time and space.
After all, every Christmas is first Christmas.

Every Christmas is First Christmas: The Importance of the Festive Specials