It began with vanilla.
Up to and including Series 5, we had vanilla DVD releases: typically three episodes of Doctor Who released together sans special features. These were for anyone who simply couldn’t wait for the big boxsets that collected a whole series together. The first one, unleashed onto an eager market back in May 2005, featured Rose, The End of the World, and The Unquiet Dead. This was a range for folk not willing to shell out weighty sums of cash for 13 episodes (plus Doctor Who Confidential cutdowns and extras), or simply not willing to wait. You can still pick them up, mostly under £3 a time.
In 2011, the BBC made a smart move. With Series 6 split into two, so too were the DVDs. Part 1 was The Impossible Astronaut to A Good Man Goes To War, while Part 2 picked up again from Let’s Kill Hitler and concluded with The Wedding of River Song. These also had placeholder special features – light content on the Silence, Gangers, Cybermats, and the Antibodies.
A big boxset was released later on in the year, just in time for Christmas. This release had bells and whistles and a tongue-in-cheek sketch about Rory looking up Amy’s skirt.
And then Series 7 came along. In October 2012, Series 7: Part 1 was released on DVD and Blu-ray… but the BBC forced us to make a bigger decision than before – or spend out numerous times on the same release. The DVD and Blu-ray featured Asylum of the Daleks, Dinosaurs on a Spaceship, A Town Called Mercy, The Power of Three, and The Angels Take Manhattan, the last episodes to feature the Doctor with Amy and Rory. Instead of the standard vanilla releases of yesteryear, the BBC decided to make the entire Autumn run of the show available. Part 2 would follow, and eventually a full boxset.
Fair enough. We’re used to having to make the choice of buying each release separately or waiting for the full series.
But Doctor Who Series 7: Part 1 had been released in three formats – four if we include a special BBC Shop package.
The standard release has the Doctor carrying Amy through a menagerie of exploding Daleks (is this the first time the Special Weapons Dalek has featured on a cover?), and was well-worth getting.
Then there was also the Weeping Angel Limited Edition DVD and Blu-ray, which featured all the things the normal version does – but also a 45-minute special feature, The Science of Doctor Who. Aside from this, it was adorned with, of course, a stunning Weeping Angel on the cover, as well as an A3 poster showcasing the aforementioned Dalek picture – with Augmented Reality!
Oh, and it’s also specially numbered to certify that it’s the Limited Edition. Well, that’s simple, then. If you’re really a Doctor Who fan, you’d want the Weeping Angel cover, particularly as it was roughly the same price as the standard edition.
But then the BBC messed with our minds once more. 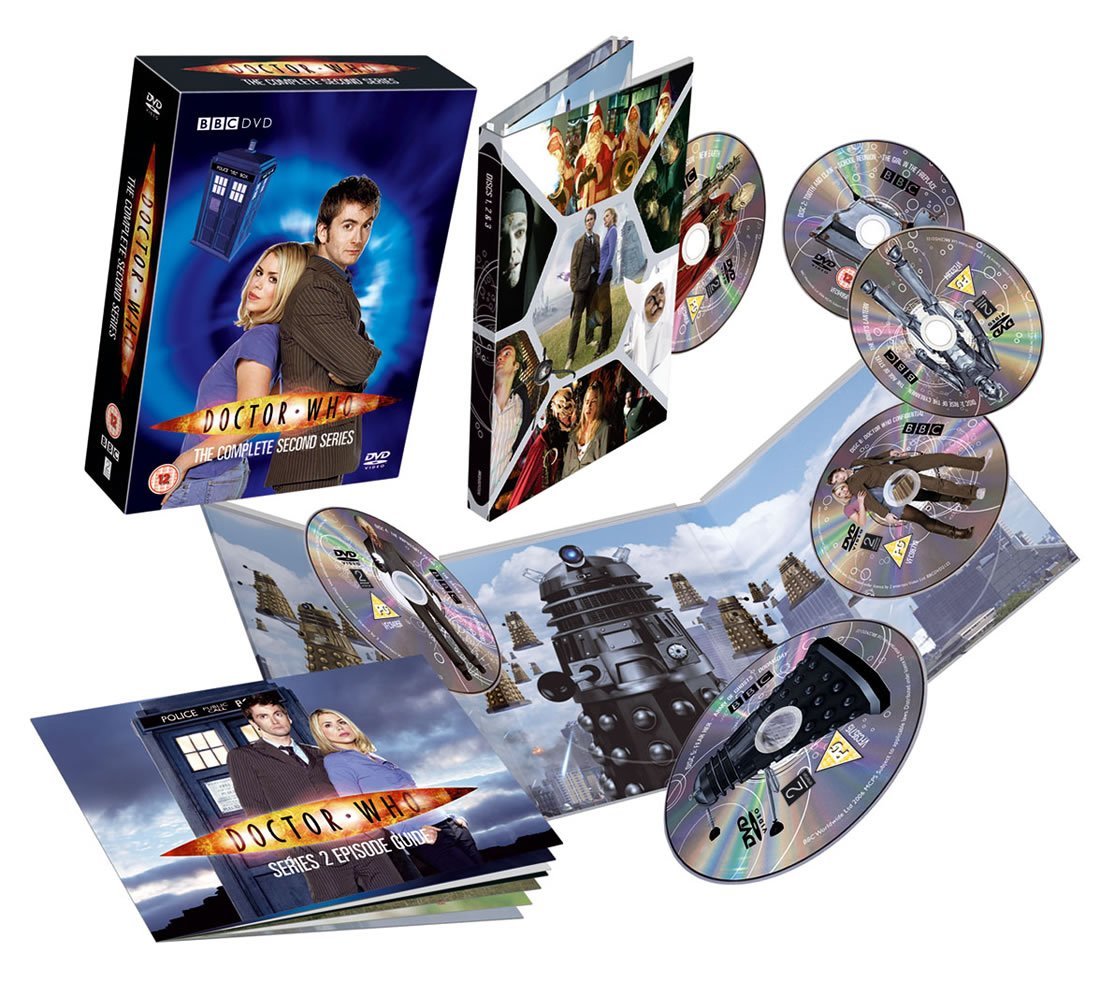 The now-sadly-defunct BBC Shop had an exclusive DVD and Blu-ray: like the standard edition – missing the A3 poster and extra feature – but it did have limited edition art cards inside. They’re really cool, actually. Steven Moffat said that the episodes that year were like blockbuster films, and so the art department created fitting poster-style promotional images. These were included in postcard-size, without being cluttered by the text (ie. episode titles and cast and crew credits).
So that release was tempting too: as a BBC Shop exclusive, the art cards were much rarer than even the Limited Edition Weeping Angel DVD/Blu-ray. And furthermore, you could even buy a pack that includes the latter edition with an exclusive Weeping Angel t-shirt!
That’s the one I bought, and I remain impressed with the art cards, particularly The Power of Three one. But I resented having to fork out a further £17 to get a poster and a 45-minute documentary. And then once more in 2013 when the complete box set was released. Wouldn’t it have been just as easy for the BBC to make an exclusive edition of the Weeping Angel version, complete with art cards?!
A similar plethora of variants came with Part 2. (I remember being extremely annoyed when buying the Part 2 set specifically for the postcards only to be informed by the Beeb that they’d ran out of the cards and I’d have to put up with it.)
That’s beside the point. This is a good example of how merchandise can get out of hand, and more worryingly, how easily Doctor Who fans can be exploited. Sure, argue that it’s our fault for buying these products regardless, but that’s our MO, right? Our job description clearly states: “OBSESSIVE.”


The amount of money we plough into merchandise and we were, for some reason, then forced to hassle the BBC until they included The Doctor, the Widow, and the Wardrobe on the “complete” Series 7 boxset in the middle of 2013.
Series 7 wasn’t the only exploitative series: the BBC Shop boasted a few Series 8 releases, including an inexplicable Deep Breath one-off (accompanied by that terrible Doctor Who Live: The Next Doctor show that unveiled Peter Capaldi) – just in case fans couldn’t wait to relive that single adventure. Series 9 came in two parts, plus a boxset. We also had separate releases for The Day of the Doctor, and The Time of the Doctor (the latter at least further included all the Eleventh Doctor’s festive episodes).
Admittedly, I picked up two unnecessary releases at the Doctor Who Festival : Series 9 Part 1, and the collected Christmas specials. Why? Because I felt they were suitable reminders of the event. And I’d hoped to get Peter Capaldi to sign one of the postcards that came with them. Needless to say, that didn’t occur.
The crème-de-la- crème was The Extremely Limited 50th Anniversary Sets. These remain absolutely gorgeous boxes, collecting Matt Smith’s final three stories, the wonderful An Adventure in Space and Time, The Night of the Doctor, The Five(Ish) Doctors Reboot, The Ultimate Guide, Professor Brian Cox’s The Science of Doctor Who, and then some. Much of the content was only available on this set. Mind you, the packaging – though beautiful – was flimsy, there were no commentaries, and the excellent The Culture Show: Me, You, and Doctor Who was entirely absent. Still, I remain in love with that release. 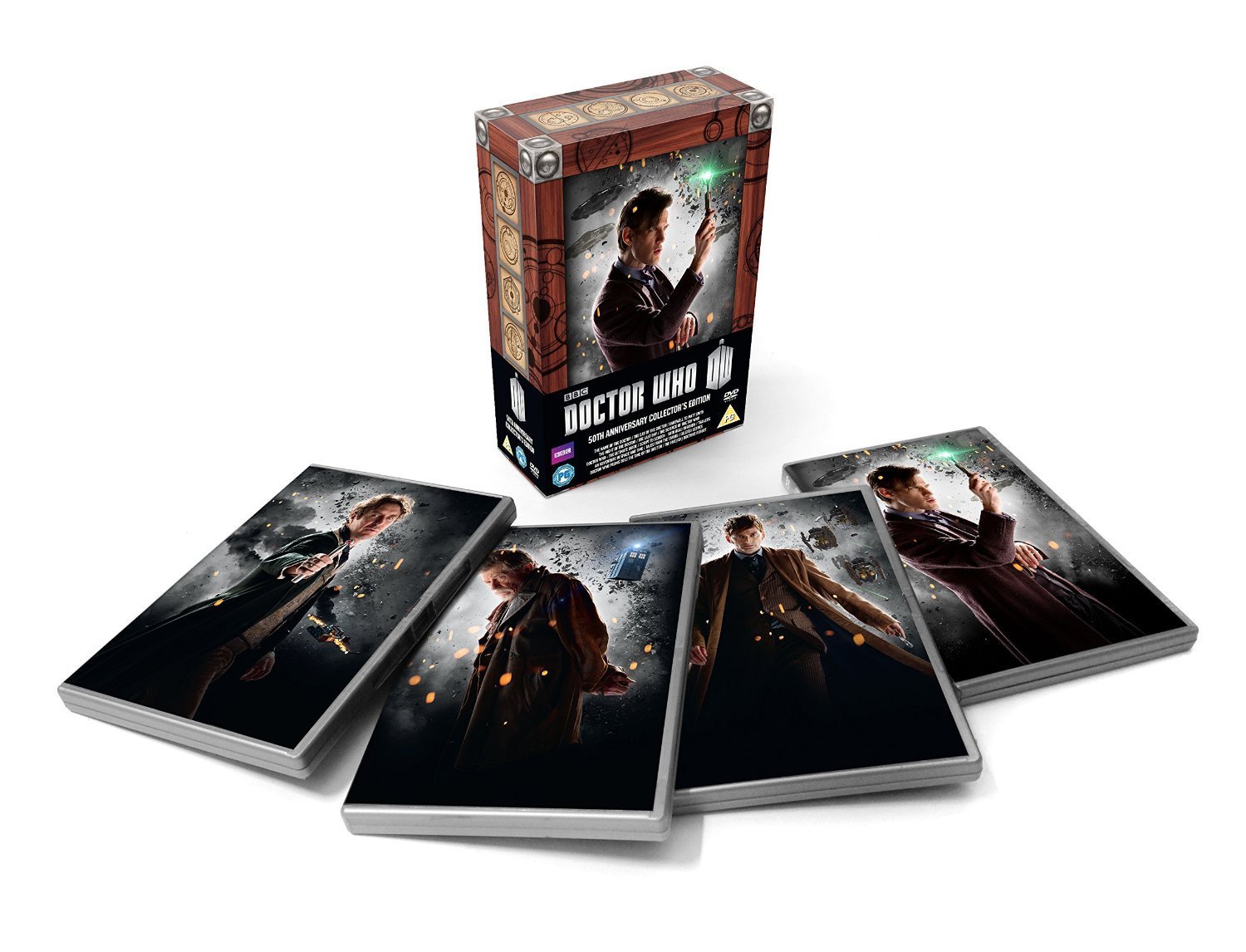 Elsewhere, though, we’re given so many options, it’s hard to see what the best offer is, and I think that results in fans being manipulated into spending out numerous times for the same content. Things might change now that the BBC Shop has closed, but we’ll have to see. Here’s hoping Amazon and the like still has exclusives like the Series 9 steelbook Blu-ray.
Doctor Who fans are obsessive and completists. We’re a seemingly-endless fountain of funds for BBC Worldwide. We’re also very demanding, thankfully, so we’re not afraid to yell at those in charge if something’s missing (hence The Underwater Menace eventually getting a release. However, the DVD was massively disappointing, and we’ve just accepted that because hey, at least we’ve got it, right?).
And this is without even touching on how many times Spearhead from Space has been released…
What do you do when faced with such choices? Does it depend on what bills need paying? Or will you buy whatever you can, no matter what? Were you ever tempted by the vanilla releases? Or do you always wait for the inevitable complete boxsets?

by Philip Bates time to read: 5 min
Memorabilia Is The Day of the Daleks Special Edition DVD All T…
Features Cover Story – The Classic Doctor Who DVD Ran…
19
%d bloggers like this: