Sorry, I’m going to have to whisper this review. You see, they’ve just cling-filmed me into my cyber tomb and we’re waiting for the music to commence. The Cyber Choreographer has told me to listen out for ‘Space Time Music – Part One’ by Wilfred Josephs and not to break out until the third ‘Ba ba ba bah ba. Bam ba baa.’ The dress rehearsal was a disaster; a bunch of yetis lumbered in, thinking it was their cue too…

Now you may be wondering how I got here. Well, I was experimenting with the extraction of nitroglycerin from gelignite when I added a bit of cyber dust I found on an old kilt (I was planning to create a new form of explosive I call Nitro 9.1) when – BOOM! – a massive time storm swept me up and deposited me on what looks like the planet Telos in the 25th Century.

Which was rather splendid as I landed shortly before Doctor two, Jamie, and Victoria are about to turn up and open up the cyber tombs. Now I don’t know about you but I’m rather fond of Tomb of the Cybermen, and I’ve always wanted to revisit a certain magic moment from that story…

Now, some people like the dramatic scene where the Cybermen slowly and menacingly descend from their frozen pods; others like the quiet exchange where the Doctor talks to Victoria about missing his family; or the dramatic battle between Toberman and a Cyberman when we see that, in times of extreme danger, Toberman’s Emergency Bottom Wire is activated, which latches on to the ceiling and lifts the big man out of danger.

But for me, the moment I’ve always wanted to re-visit is that classic scene in Episode One. You know the bit after Jeremy Corbyn – I think that’s who it is? – the archaeologist chap, anyway, tells everyone to split up. Then Jamie and Haydon (surely the key character in Tomb we’ve all been desperate to see make a comeback for the last 48 years) take a walk down a corridor. Yes, THAT corridor with Jamie and Haydon. 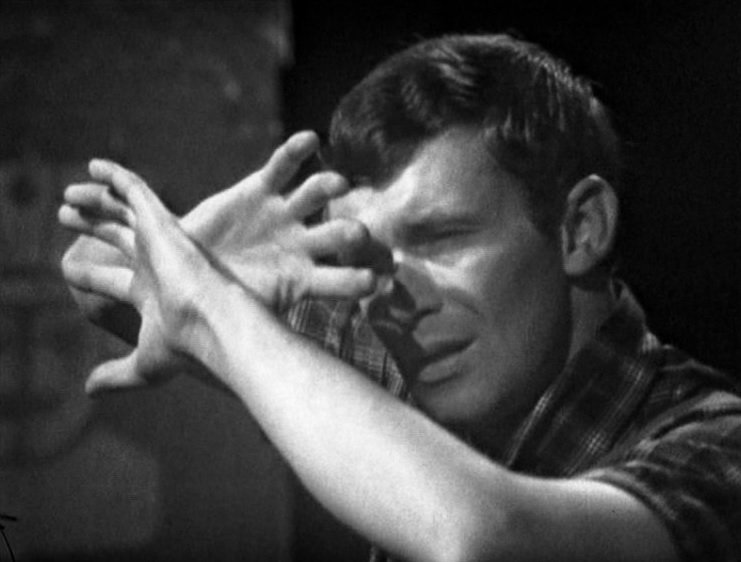 That’s where Return to Telos comes in, the finale of the fourth series of Big Finish’s Fourth Doctor Adventures. Nick Briggs wanted to re-visit a classic adventure from the Troughton era and mash it up by throwing the Fourth Doctor, Leela, and K9 into the mix. From his extensive viewing and re-viewing of Tomb, Briggs selected the aforementioned magic moment in the corridor to set his new adventure around.

Except he didn’t just do that. No, what Briggs really wanted to do was to write a sequel to his previous adventure, The Fate of Krelos. That’s why he decided to call it ‘Return to Krelos’ and Big Finish packaged the two adventures together as a double CD set. I mean you would, wouldn’t you? You wouldn’t do something silly like sell a single CD that follows on directly from the previous adventure that makes no sense whatsoever unless you’ve heard the first one?

The other thing you DEFINITELY WOULDN’T DO is release a story that purports to take place during the action of one of Doctor Who’s most well regarded classic stories, then fill it mostly with your own silly characters and set it largely on another planet. And when it came to designing the artwork, you wouldn’t put a classic companion on the cover who makes what amounts to little more than a cameo appearance. You definitely wouldn’t write a story and miss the opportunity to team up two of the Doctor’s classic companions, Jamie and Leela, would you? Imagine the sparks that would fly if those two knife-wielding warriors were to meet (and you’ll have to settle for imagining because they don’t even exchange a glance, let alone fisticuffs)!

But of all the opportunities you wouldn’t want to miss is to match up Tom Bakers’ revitalised Fourth Doctor with Frazer Hines’ pitch-perfect Troughton resurrection (‘impression’ really doesn’t do it justice). I mean, you wouldn’t be crazy enough to have the Second Doctor captured by Cybermen, then get Frazer to perfectly recreate Troughton’s performance by asking him to mostly give out an agonised moan and shout things like, “Ow, ooh, help, mummy, ouch, argh, no!”

Sorry, this review is getting quite heated. I’m feeling a bit claustrophobic sealed into this cyber tomb and I’m not sure that any air is getting in. What’s frustrating about Return to Telos is that there is actually perfectly serviceable Doctor Who story going on among the missed opportunities. It just has nothing to do with Tomb of the Cybermen. Yes, they share the same monsters but so do quite a lot of adventures. And the Cybermen presented in this Big Finish tale are quite unlike those encountered in Tomb. They are a time-travelling swarm of metallic giants that can infiltrate and subjugate a planet (in this case, Krelos) within a matter of minutes, a bit like those glimpsed in Nightmare in Silver. They are are an unstoppable force that mean even the most sophisticated Emergency Bottom Wire technology cannot rescue you from their clutches. 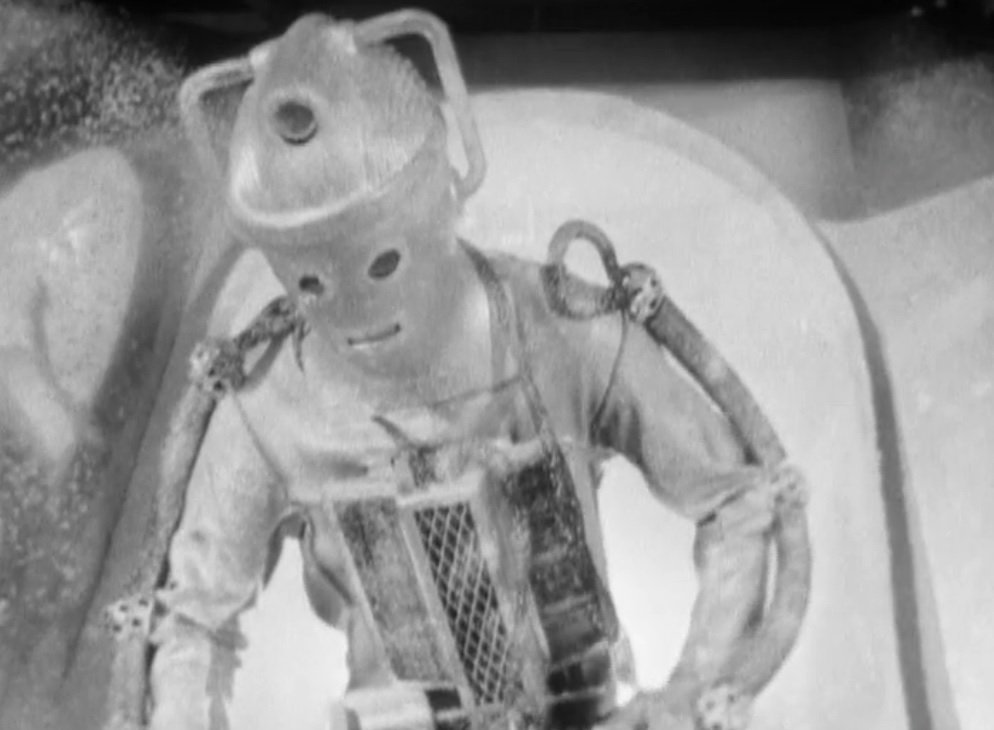 And, despite all my complaints, Tom Baker and Louise Jameson give their usual brilliant performances. Their final scene together as they stare up at the stars is a delight. But you’ve got to question what Big Finish were up to when the interview extras included with the story feature Jameson and Hines expressing their disappointment that their characters never meet. Frazer even comes up with a great idea for what might have happened if they did…

The story promised us a new insight into the events of Tomb of the Cybermen and [EXPLOSIVE SPOILER ALERT] Return to Telos reveals that behind the cyber tombs there is a massive empty chasm! Yes, bet you didn’t expect that! Doctor Who forums across cyberspace must still be buzzing with the revelation… ‘Sack Briggs now!’; ‘The Brigg is bringing bold and fresh ideas to Doctor Who, you just don’t like innovation!’; ‘I think the massive chasm is really the Rani!’; ‘When, oh when, are Lovarzi going to release a replica Toberman® Emergency Bottom Wire?’ 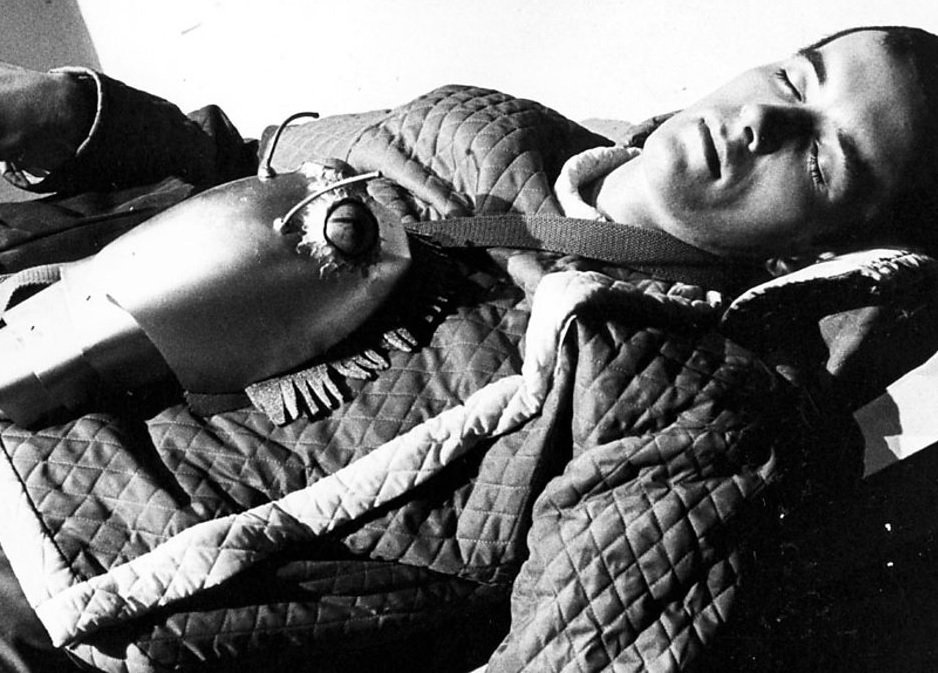 Well, if the chasm revelation blows your mind, wait until you hear these hitherto unimagined Doctor Who facts: In a cupboard behind the control room the First Doctor adventure, The Daleks, there are six unused quad bikes! Six! When the Third Doctor takes a shower in Spearhead From Space, he is actually wearing flip-flops! On his feet! In Davros’ desk draw in Genesis of the Daleks, there is a banana he confiscated from Nyder that he plans to eat himself! But he forgot and now it’s a bit over!

The truth is, the massive chasm in Return to Telos is actually the aforementioned accumulation of missed opportunities in this story. I wouldn’t be surprised if in the next few months Big Finish announce a special release where Jamie and Leela finally team up for an adventure where they have to rescue Doctors two and four, who are locked in an uncomfortably small room with only the board game Taboo for entertainment. “I really wanted to get into the whole thing of the Doctors meeting,” says Briggs.

Oh, sorry, but I have to go, the music has just started and the Cyber Choreographer is giving me the evils. It’s funny, I had no idea that Tomb of the Cybermen was actually an immersive theatre show staged in a disused quarry in Buckinghamshire, where the audience pretend to be outer space archeologists and they interact with a bunch of actors pretending to be robotmen. Gosh, I’ll never watch Tomb of the Cybermen in the same way again…

(Adapted from an article originally published on Kasterborous in Sept’ 2015.)