Hello, class. Sorry I’m late, I got caught up brushing these darn petals out of my garden. Bloody nuisance. Anywho, we’ve reached the halfway point of this season of Class, and that comes with two changes. But before all that, let’s see what you all thought of Co-Owner of a Lonely Heart!
What were the results of the latest poll? 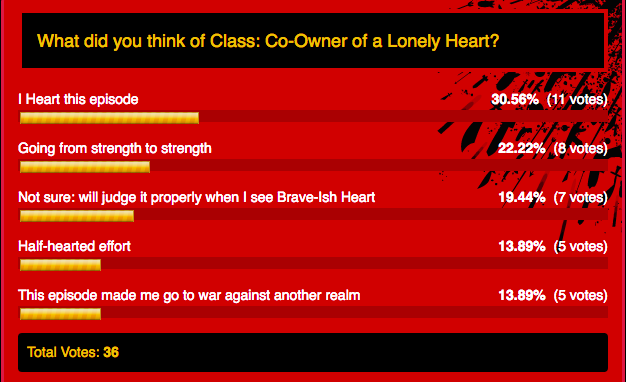 As you can see by the chart here, the reaction to this episode has been the most mixed an episode of Class has received so far. Our lowest ranking has had the highest votes it’s gotten so far. And to be honest, I see where they’re coming from. Co-Owner of a Lonely Heart is the first episode of Class I disliked. But first let’s talk about those changes I mentioned earlier.
The first change is a brief format change. Co-Owner is in fact the first half of a two-parter! Look, there’s a big ol’ (Part 1) right there in the title! Who would’ve guessed Class would get its very own one, eh? It’s nice even in a smaller 8-episode series to have a story that’s allowed to breath more, and we’ll discuss if that benefited the overall story in the Night Study for the second half: Brave-ish Heart. It’s weird that they wouldn’t leave the two-parter for the finale though.
The second change is behind-the-scenes. Mainly, the swapping out of director Ed Bazalgette to newcomer Philippa Langdale, adding her to the (sadly small) list of female directors who’ve directed for the Doctor Who universe, and more specifically for the spin-offs, alongside Alice Troughton and Gwyneth Horder-Payton.
Some visual moments of this episode I liked include the aerial tracking shot of our first proper look at The Underneath, the petals flowing in and out of scenes, as well as the subtle camera pans to make April’s (Sophie Hopkins) new blades appear and disappear. I’m glad Philippa is also doing the second half to give this two-parter a consistent overall feel.
Let’s keep talking about what I liked about this episode while we can. As usual Mrs. Quill (Katherine Kelly) continues to be the best character in the show and this episode places her in contact with Dorothea (Pooky Quesnel), the latest example of the Governors’ presence in Coal Hill. With every new tease of the ominous Governors, I get more and more interested in this overarching story, and Co-Owner continues to build on their mystery (especially if you pause on that file Dorothea has to really understand the extent of how much they know that they really shouldn’t). We also see more of Charlie’s (Greg Austin) alien-ness in this episode as he talks to Matteusz (Jordan Renzo) and Tanya (Vivian Oparah) about the Cabinet of Souls. Delving into the morality of being the Prince of a dead race is something I’m glad the show is exploring, and I enjoy watching the Rhodian point of view conflicting with the Human’s and Quill’s. The contrasting races and characters of the show are definitely one of it’s strengths.
Now that I’m done talking about what I liked from this episode, let’s talk about what the majority of this episode was actually about, April. More specifically April and Ram (Fady Elsayed). Remember how I complained that it felt too soon for April and Ram to suddenly kiss in the last episode? Well, boy does this episode jump the shark on their relationship in this episode. It’s so rushed and forced, I couldn’t believe what I was seeing. It’s only been one month since Rachel was killed right in front of him, and just last episode the Lankin had scanned Ram and found that Rachel was the best face to use to entice him into joining it… and we’re supposed to believe that, within a few days of kissing, April and Ram would already have sex? I understand that relationships form quickly under situations of unique pressure, but I don’t buy that moment at all. In fact, I find it a bit insulting to Ram.
And not only that, but during the episode they cut between April’s feelings and Corakinus’ (Paul Marc Davis) feelings as they share the same mood swings, and this also happens during the sex scene as we see Corakinus mating with Kharrus in tandem with April and Ram. I didn’t mind the idea of showing this mirroring, but they completely ruin it by giving Corakinus a really poorly timed punchline, that strips away the only thing Corakinus had going for him as a villain – his intimidating personality and design – and leaves him as a joke.
With Corakinus ruined, they at least end this episode on a pretty exciting cliffhanger that, even though I spent most of it’s runtime annoyed, managed to make me want to watch the next episode. I was never super into the Shadow Kin anyway; let’s just focus on the Governors after this two-parter, please?
So, with my rant over, what did the readers of the DWC think?

Well, that’s it for this week, class. Let’s hope that the conclusion of this two-parter is better than it’s first.

by David Power time to read: 3 min
Features Exclusive Preview of The Black Archive: Pyramids o…
Features Here's What The Doctor Who Companion Thought …
3
%d bloggers like this: