It was all going so well. While millions were thrilled to watch Doctor Who Series 10 finale, The Doctor Falls, discovering the fate of Bill Potts (Pearl Mackie), and witnessing the beginning of the Twelfth Doctor’s (Peter Capaldi) regeneration.
But for many, it was spoiled by a technical issue that meant the finale couple of scenes were broadcast without any sound!
The problem seems to have only affected those watching on BBC Scotland HD – but if you had similar troubles and were watching on a different station, let the BBC know so they can properly investigate!
The music and dialogue seemed to disappear following Bill Potts’ apparent departure from the TARDIS (and the series) alongside Heather (Stephanie Hyam), so viewers couldn’t hear various previous companions – annoyingly, excluding Rory; why do they always miss out the wonderful Mr. Williams?! – calling to the Doctor, from his memory, his quoting previous incarnations of the Time Lord, and his emergence from the TARDIS. That’s, of course, the cliffhanger, which leads into Christmas 2017.

Many apologies to anyone who experienced problems with the sound on The Doctor Falls. We're looking into what went wrong. (1/2)

So what can those affected do? Well, fortunately, you can head over to iPlayer and watch it without any sound problems. Indeed, the whole of Series 10 is available on iPlayer, so you can enjoy all of Bill’s adventures alongside the Doctor and Nardole (Matt Lucas)!
The BBC has apologised to those affected, and has asked that the UK government kindly doesn’t use this as an excuse to pointlessly investigate the license fee again. (Okay, only half of that is true.) 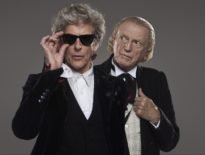 Features Should the Doctor Who 2017 Christmas Special Be 75…
News The PodKast with a K: Is Empress of Mars Mark Gati…
6
%d bloggers like this: