First of all, a confession. This reviewer has for a long time wanted not only a multi-Master story on our screens but last year was also pondering the story possibilities if the Master were to join the Doctor on board the TARDIS in a rehabilitation-type season arc. A bit like how Spike was slowly reformed in Buffy the Vampire Slayer. So it became excitingly clear as soon Series 10 (Series 10 of Doctor Who in 2017: it’s still exciting just to type those wonderful words) started, it showed its season trailer at the end of The Pilot that we were going to get at least one of those storylines. After the events of the Monk trilogy, it seemed we were getting both. There was excitement, joy, and a sternly worded draft of a letter to the Doctor Who production office claiming that your humble reviewer was in fact the architect of the biggest storylines for Series 10 and should be paid royalties (one of those is a lie – you decide which).
But after 12 weeks of waiting, would The Doctor Falls pay dividends for its promised build up? Yes. No. Both, really. The Doctor Falls, as is typical for a Doctor Who series finale, has a lot to do and not a lot of time to do it in. There is of course the added pressure that our hero won’t make it out unscathed this time, which adds to the expectation somewhat. Luckily, the good people on the Doctor Who production have given us a full hour of their attention, rather than 45 minutes, which allows the Twelfth Doctor’s (Peter Capaldi) penultimate episode some appropriate breathing room to fit in everything it needs to. Most of this is a success, especially on second viewing; other moments are either a waste, somewhat clichéd, or just a little stale.
The story has many memorable moments. The Master (John Simm) and Missy (Michelle Gomez) circling the Doctor with ideas of death is wonderful, the Simm incarnation calling the Doctor ‘my dear’ is just too cute for words, the back and forth between the three old friends is wonderful with some great gags – perhaps the most fun is both Masters telling poor Nardole (Matt Lucas) that the Doctor never liked him in quick succession. What wonderful wordplay and how differently it’s used as opposed to when multiple Doctors are conversing. The shot of CyberBill (Pearl Mackie) holding the Masters (plural, not ownership) back in their ship is glorious, Rachel Talalay borrowing from Captain America: Civil War ever so slightly.
The sheer sense of calm before the storm as the Doctor and his friends prepare for their final battle is palpable here: it’s clear not everyone is getting out alive. Maybe it’s because we know that the Moffat era is ending but it never felt quite this bleak in The End of Time or The Time of the Doctor – it’s a credit to the writing, acting and direction. This whole era, started with Russell T Davies and finishing with Moffat, is at its end. Its final end. To top it all off, there are three major stand out moments for this reviewer: the beautiful speech the Doctor gives to the Masters about doing what he does not to win but to simply be kind, showing the differences between the two aspects of the Master in their reactions. The two Masters simultaneously killing one another, one out of hope and the other out of spite and resentment is another seminal moment in Doctor Who. Unless Chibnall resurrects the Master in years to come, the sight of two dying Masters laughing hysterically at their own self inflicted demises is so right for their characters. It’s a perfect end for two of the era’s best villains. Finally, the Doctor’s last stand as he falls to the Cybermen. What a way to go. This is how Capaldis Doctor should always have been, the vitriolic hero. Running in slow motion through the forest, blowing up Cyberman, citing all of the times he’s defeated them. It’s a beautiful moment and makes it impossible not to fall in love with this incarnation of the Doctor.
Excellent moments aside, there are always grumbles to be had, especially when it comes to Moffatt related finales in the last three years. The so called Genesis of the Cybermen is hardly that at all; more a ‘Showcase of the Cybermen’. They’re here as the unstoppable enemy in this episode and nothing more, their story from World Enough and Time seemingly taking a very far back seat in favour of the other plots. Sure, they look great, they explode wonderfully, and they’re unrelentingly scary. But this is not really a beginning. It is actually more of an exodus; Nardole had it right and the Masters were wrong.
Bill’s cyber transformation is interesting indeed and offers some wonderful moments of visual play as we dart back and forth between her Cyber form as well as her conjured up human form to help her cope. The Cyberman retaining their emotions in certain cases has been done before but never to this deep an extent, which gives some excellent visuals of the Doctor next to the shape of a Cyberman. However, it all culminates in Bills’s death and subsequent dumping of the Doctor to go off and see the Universe with her love prospect from episode one, The Pilot. Remember the dead girl who Bill fancied (Stephanie Hyam)? She’s suddenly, bizarrely back at the end of The Doctor Falls and has apparently been tracking Bill the whole time. She was so keen to get to Bill in the first place and has now waited… Why, exactly? And Bill, after building a strong friendship with the Doctor, leaves him possibly for dead? It’s certainly one of the most contrived ways to clear decks for a new era that this reviewer has seen in a while. Once again also, we have a friend of the Doctor’s who dies but doesn’t really die and can live out their life but without ever really being able to see the Doctor again. For that to happen once is an interesting way to write someone out of a series; to do it three times in a row smells of running on fumes in terms or writing. In other areas, it would have been nice to see at least one of the Masters regenerate, Simm’s incarnation would have been preferable if not for anything but completion’s sake. However, it also seems that Moffat is giving the incoming showrunner plenty of wriggle room to perhaps sneak in a cheeky incarnation between Simm and Gomez or even give Simm’s Master a chance to come back again. It’s not the end of the world – at least we got some closure regarding how he escaped Gallifrey, stopped bursting at the seams and removed that annoying drumbeat from his head. It would also have been splendid of the Masters to be more integral to the plot. Whilst theirs was a story of merely escape-the-situation, if they weren’t present would it had made any difference to events? Maybe they cause the problem, but they’re almost shoehorned to the side here. Designed to make things sadder for the audience when they let the Doctor down but not move events along.
And finally, the last scenes. This is the end for Capaldi’s Doctor: all is lost and regeneration is imminent. His initial final moments, seeing his friends (sans poor Rory) as he dies, is lovely, Obviously because it’s Moffat, it’s a straight borrow form the Fifth Doctor’s end. Also odd that the Doctor would see Clara, as she’s been erased from his memory. There’s probably a good reason for that, but it would take too long to explain. Maybe Moffat will one day, in his Production Notes for Doctor Who Magazine. However, the Doctor remembering his last words from other regenerations is pretty good and a nice look back at the past… and doesn’t that just sum up Moffat’s last three years on Doctor Who? A nice look back to the past. The final moments, the Twelfth Doctor meeting his First incarnation as both are presumably moments away from their separate regenerations is a fan pleasing move but whether we need another multi-Doctor story so soon after the last one remains to be seen.
When all is said and done, The Doctor Falls is the best finale that Steven Moffat has done in a long time and certainly the best he has ever provided for Capalid’s incarnation. Is it a classic? In some respects certainly, but not because of its originality but more because of the legacy it provides to Doctor Who mythos. It’s with this finale that we hope the clearing of the decks can begin and Doctor Who can begin a fresh new life in 2018 to attract a whole new audience to enjoy it.
Moffat, Moffat, let it go. Time enough.

by Mez Burdett time to read: 6 min
Doctor Who on TV Reviewed Reviewed: The Woman Who Fell To Earth 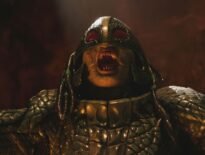