War! Huh, what is it good for? Absolutely cracking Doctor Who serials, that’s what! And no conflict has captured the futility of a conflict between an unstoppable force and an immovable object (other than the Betamax/VHS wars, less we forget) than the legendary Cyber-Wars.
We last heard about the Cyber-wars in Neil Gaiman’s Nightmare in Silver (2013): Porridge, the henchmen of a soused old showman/ king of the universe, wearily described just what happened when an alliance of galaxies decided to rid the universe of the Cyber menace to Clara Oswald.
Behind those lines – including such breath-taking brevity as, “It’s hard to fight an enemy that uses your armies as spare parts” – lies a truth that’s ultimately much about the Doctor’s own encounters with the silver menace as it is about Porridge’s own resignation at his life, seemingly with the profiteering entertainer, but more so as a reluctant monarch: that the Cybermen are not going away.
The declaration of war was first made in the 1982 serial, Earthshock, in 2526 where an alliance attempted to stop the Cyber threat spreading across the galaxy. However, the Cybermen hit back; first with a Cyber bomb and then by piloting a freighter into Earth in order to cause an ecological disaster. Both of these attempts to sabotage the alliance and indeed destroy Earth were thwarted by the Fifth Doctor, but at a great personal cost.
As the unstoppable craft hurtled towards the a pre-historic Earth, trapped inside by both damaged controls and his own hubris, Adric remained on board to become the first companion to be killed since Sara Kingdom.
In the midst of their plans, a discovery was made (or rather was made earlier in the Doctor’s own timeline but later on in the conflict) – that the Cybermens’ Achilles heel was gold.
The 1985 serial, Attack of the Cybermen saw humanity finally take a foothold in the war with a key development: the ‘glittergun’ which used gold dust supplied from the fabled planet of gold, Voga, to push the Cyber forces to breaking point.
Meanwhile, in a pincer movement that would make old Herodotus pause for breath, the native Cryons on the planet Telos rose up and sabotaged the Cybermens’ hibernation tombs.
Again, not being ones to take defeat lying down, the Cybermen captured a time machine and travelled back to Earth in 1985 in order to prevent the destruction of their home planet Mondas.
Foiled by the Sixth Doctor and Peri and with Telos back in the hands of the Cryons, the Cybermen were all but defeated save for a few pockets of resistance scattered across the cosmos. 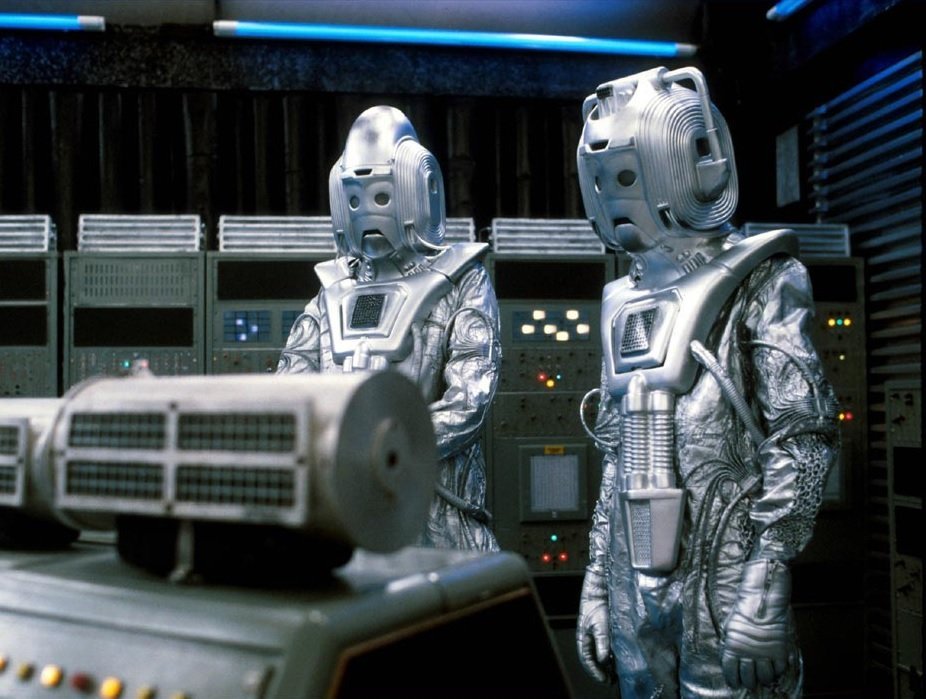 One such group of resistance fighters, memorably dubbed ‘a bunch of pathetic tin soldiers, skulking about the galaxy in an ancient spaceship’ by the Fourth Doctor in the 1975 serial, Revenge of the Cybermen, discovered that Voga had drifted into the solar system, being pulled into orbit around Jupiter as a new moon in 2875.
Their plan was to avenge (yes, apparently machines are capable of revenge… and, if left alone for a long period of time, will go a little ‘disco’ too) their fallen brethren by destroying the planet and thus the universes access to the gold munitions.
However, once again the Doctor foiled their plans.
Nightmare in Silver was the latest instalment in the Cyber-wars, revealing that the only way to stop a mass force of the mechanical monstrosities, was to blow up the planet. Porridge grimly informs the Impossible Gal: “[That big black nothingness] used to be the Tiberion Spiral Galaxy: a million star systems, a hundred million worlds, a billion trillion people. It’s not there any more. No more Tiberion Galaxy. No more Cybermen. It was effective.”

Now, we don’t quite know where The Time of the Doctor (2013), Dark Water/ Death in Heaven (2014), and World Enough and Time/ The Doctor Falls (2017) – all three serials using the modern Nightmare Cybermen designs – take place in relation to the Cybermen’s histories and to the Cyber-wars. But with that Cybermite seen at the end of Nightmare in Silver, we can be sure that the never-ending conflict between humanity, the alliance, and the Cybermen is just that: without end.

(Adapted from an article originally published on Kasterborous in 2013.)

by Andrew Reynolds time to read: 3 min
Fandom Chasing the Dragon: The Original Doctor Who Experi…
Features Here's What The Doctor Who Companion Thought …
1
%d bloggers like this: