Series 6 is, to me, the definitive Steven Moffat season. It embodies his vision of Doctor Who as a show which is focused more on the fantasy than the science of its science-fantasy genre, and where the viewers’ relationships with the characters are more important than how ‘realistic’ the plots are.
I’m sure many dislike the fairytale-like style adopted by Moffat in many of his stories, perhaps complaining that it detracts from the believability that the events seen on-screen could be possible in real life. Whilst there are times, of course, when Doctor Who has been used as a medium by writers to express concern about the future of Earth and humanity, or to reinterpret the past through modern eyes (as in the ‘pure historical’ stories), the show is a fantasy, and doesn’t often aim to add scientific plausibility to its stories.
It makes sense, therefore, that Steven Moffat, with his love of the fantasy, family-orientated view of the show, and his genius at weaving complex, timey-wimey plotlines, would take the idea of exploring the lives of the main characters and make this the main focus of a whole series – we don’t just see them getting dropped off back home, as is the norm in Doctor Who when it comes to character ‘development’; their lives are irrevocably entwined with the Doctor’s.
Series 5 showed much development in the relationship between the Eleventh Doctor and Amy Pond, but not much further than might be expected when a new companion is introduced. The sixth series, however, takes full advantage of the viewer having already got to know all four main characters, and uses these characters to weave a story arc that spans the whole 13-episode run. 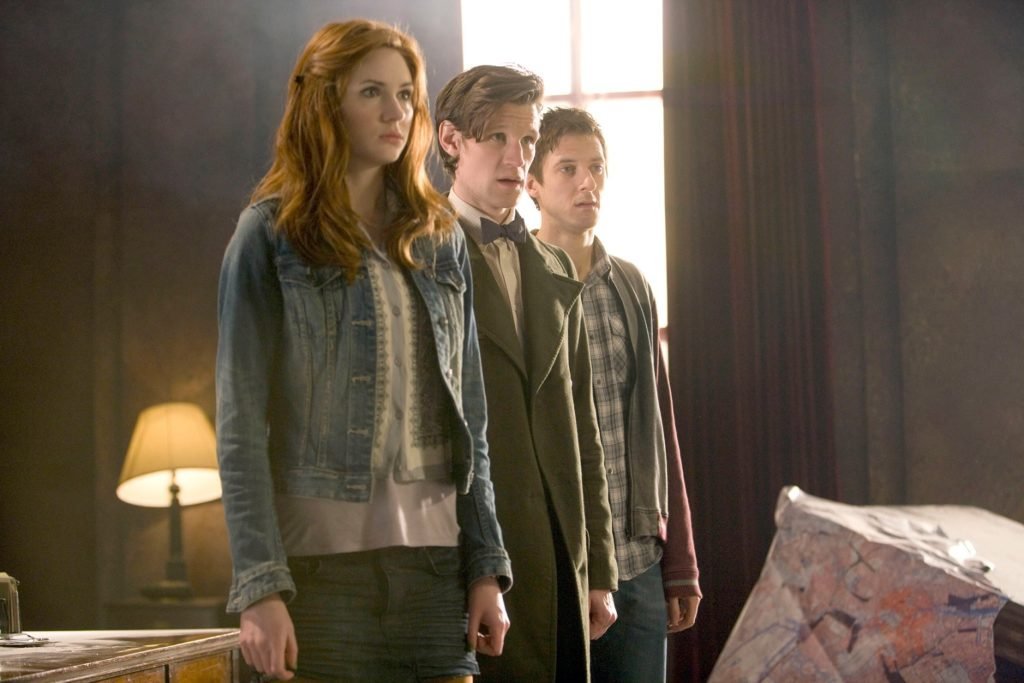 The result of this is a series of Doctor Who which, more than ever, actively encourages the audience to become emotionally involved throughout, whilst also allowing people to jump on at any point and enjoy a thrilling and unique science fantasy adventure every week.
The series arc by no means limits the scope of the adventures that take place: we travel in time and space as much as ever, and meet all kinds of monsters, aliens, and moral dilemmas. The difference is that, for the more dedicated viewer – who wants something more from the show than just an exciting adventure each week – the whole series feels like is leading somewhere. Never has the audience been rewarded so greatly by following the drama throughout a whole series of Doctor Who.
Never is this more obvious than in Let’s Kill Hitler: all of Series 6’s main features available in one convenient episode!
I rewatched Let’s Kill Hitler to prepare to write this article because, whilst quite frankly not being a highlight of this, or indeed any, series, it features very heavily the arcs of River Song, the death of the Doctor, and the Silence – all three of the main ongoing stories of the series.
Returning from a summer break after the revelation that River Song is Amy and Rory’s daughter, Let’s Kill Hitler continues with the character revelations as we learn that Amy and Rory’s childhood friend was, of course, Melody!
Then Melody regenerates, then kills the Doctor, then we learn more about the mysterious Silence (arguably the arc of the Eleventh Doctor’s tenure as a whole), and then River sacrifices her future regenerations to save him. We’re also introduced to the Teselecta, which will prove to be the means my which the Doctor escapes his inevitable death at Lake Silencio. It’s a lot to take in, and leaves little room in the story for anything else. The Nazi Germany setting, of which we see very little, is the only feature of the story which doesn’t contribute to the wider series arc. Admittedly, we do have the crop circle sequence, jokes at the expense (quite rightly) of Hitler, and the comedic attack methods of the ‘antibodies’, to provide some plot-independent entertainment, but rewatching the story is rather unexciting, knowing what’s going to happen – it lacks a self-sustaining plot, serving only to update us on the status of Moffat’s various timey-wimey schemes.
It’s certainly not a bad episode, though, and I think it was sensible to group all of its content into one 50-minute blast, rather than tagging it onto other stories. What’s great about Let’s Kill Hitler is the fact that such an arc-focused episode could be produced in such a way as to entertain casual viewers who may not have been following the River Song arc – its very title would have been enough to persuade many to watch, and there are enough action sequences to provide some excitement.
In Series 6, Steven Moffat crafted a superb character-based run of 13 startlingly different, exciting episodes. There are adventures for all tastes, and a clear direction for the series, bringing a new kind of relevance to the TARDIS’ travels. Gems such as The Doctor’s Wife and The God Complex ensure it will be remembered for reasons beyond its impressive story arc.

by Joshua N Stevens time to read: 3 min
Features Two Daddies Who Love Each Other: The Doctor and Hi…
Features Titan's Third Doctor Comic Shows How to Appro…
2
%d bloggers like this: