Three Reasons The Gunfighters is Better Than Genesis of the Daleks!

That’s not a sentence you’re likely to read every day! But I’m afraid I’m one of those grumpy, finicky fans who just doesn’t dig the Dalek origin story. Well – that’s not to say I don’t like it. It’s just I don’t understand all the hype. Every time I pull the DVD from my shelf, my unwitting eyes are dazzled by that bright red label: “No. 1 Doctor Who story ever as voted by Doctor Who Magazine readers.” Really? Genesis of the Daleks? Not The Talons of Weng-Chiang? Or City of Death? Or The Daemons? Or Tomb of the Cybermen?!
Now, never in a month of Sundays do I expect to see The Gunfighters, that often-forgotten First Doctor story from Season 3, at the top of DWM’s episode polls, but there are many reasons why I would rather give it air-time over the noirish, World War Two-inspired grit-fest that is Genesis of the Daleks.
Allow me to share three of them with you…

The Gunfighters is Happier

I used to work in a supermarket. Let me be clear – there is nothing wrong with working in a supermarket! However, there were many days when I’d come home hating the world and everything in it, like on the day I was lambasted by the irate septuagenarian who utterly refused to accept that Clusters were an adequate substitute for Granola, or on the day that I spent 10 minutes in the bakery aisle debating the difference between sultanas, raisins, and currants. On those days, it’s quite nice to unwind to something feel-good, lightweight, and soothing. Genesis of the Daleks is not feel-good, lightweight, or soothing. It’s chuffing miserable. Tom Baker can stand poised with those two wires until he’s blue in the face as far as I’m concerned; ditto Davros with his invisible capsule o’ such power. After a hard day at the grindstone, it’s enough to make you cry into your P60!
The Gunfighters, on the other hand, is the perfect tonic… as long as you don’t take it seriously. Yes, it makes absolutely no sense for Dodo to start tinkling the ivories like the world’s finest pianist, or for Steven to burst into The Ballad of the Last Chance Saloon for the fnargth time, but it’s fun to watch, and no tears will be shed (cue a whole world of jokes after that sentence…!).
Moreover, you have the wonderful interplay between the characters. The Clanton brothers may not be speaking with the most refined American accents – although we can point to worse offenders in Who history – but that needn’t affect the repartee. Then you have William Hartnell, clearly enjoying himself as the newly-appointed Sheriff of Tombstone, and the marvellous Doc Holliday, with attack eyebrows that give Peter Capaldi a run for his money. Throw these actors in front of a camera, and Scenery Will Be Chewed!

The Gunfighters is Shorter!

And glory be, ain’t that sumthin’! Even the most dedicated Who fan must concede that six-parters are touch-and-go in the classic era. Unless it’s The Talons of Weng-Chiang or The Seeds of Doom, the chances are that copious amounts of padding will be applied. And Genesis, for all its dramatic wonderfulness, is a victim of this. I say victim, because I don’t think Philip Hinchcliffe (the producer) was too keen on this being a six-parter either. As such, one has to question whether Terry Nation (the writer) would have chosen a running time in excess of two and a half hours, given the choice. Perhaps not. 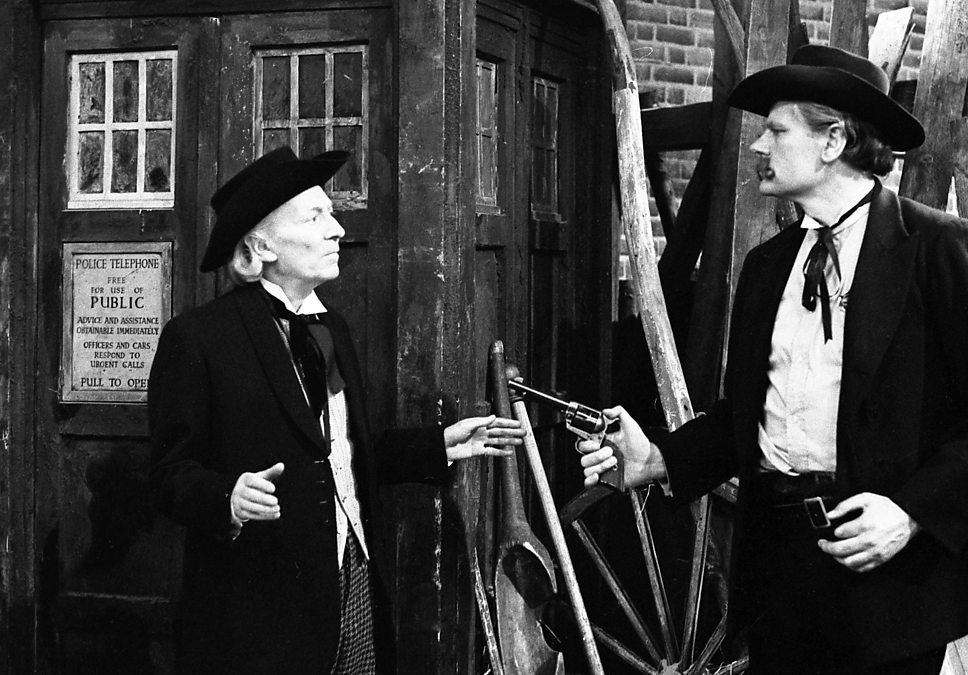 And let me say something that could well put me at the top of Nyder’s death list: Genesis would be much better given a 50-minute shaving. Make it a four-parter and lose all the boring bits – relegate those corridor chases to the cutting room floor! There’s only so many times you can escape, be captured, then escape, then be re-captured. Just keep the awesome bits. “Thank you, that’s all I needed to know!” (or something).

The Gunfighters is Beautiful to Look at!

Swirling fog, chalk pits, piles of dead bodies, hideously-mutated creatures… Isn’t that what everyone wants to see when they unwind in front of their TV screens?
No, Peri! Nooooooooooooooo! It’s depressing – it’s miserable! It might be ‘dramatic,’ but then falling off a cliff is ‘dramatic,’ and arguably as painful…! Much better to pack up your troubles in the proverbial kit-bag and ride into Tombstone, where the sun is sunny, the sand is sandy, and the corral is O.K. Plus – the real genius about The Gunfighters is that it was all filmed in a tiny television studio (Lime Grove, I believe). Barry Newbery, the designer, did a first-class job at bringing this historical world to life, with beautifully-painted backdrops, superb structures, and actual horses. Furthermore (… according to Wikipedia…), this was the first Western made for British television! Not too shabby for a first attempt, I’d say.
Which brings me to the Elephant in the Room, which I must mention in the interests of fairness: The Ballad of the Last Chance Saloon – the ever-present, repetitious, ultimately pointless piece of music that returns to haunt viewers over and over and over again. Surely the Marmite of TV tunes if ever the was one – or the sea urchin of TV tunes if we’re being entirely accurate! You may not approve, and I have no beef with that. But, as The Gunfighters is so flingin-flangin’ gosh-darned swell to look at, y’all can watch it with the sound off, partners! Then everyone is happy.
That said, I must emphasise that I do like Genesis of the Daleks. I do! There’s so much going for it: the cold and calculating Davros, so masterfully portrayed by Michael Wisher, and the adult themes, the cracking cliffhangers, and of course the Daleks themselves, who can bring awesomeness to even the duffest of stories, even Daleks in Manhattan!
It’s just… I’d much rather watch The Gunfighters!
(Adapted from an article originally published on Kasterborous in January 2015.)

Three Reasons The Gunfighters is Better Than Genesis of the Daleks!

by Alex Skerratt time to read: 4 min
Features Why It's Worth Revisiting 50th Anniversary Ta…
Features Reevaluating The Romans: A Wonderfully Dark Farce…
0
%d bloggers like this: