Read Exclusive Day of the Doctor Script in Charity Book, A Second Target For Tommy

If you’re a regular reader of The Doctor Who Companion, you’ll know the name, Tommy Donbavand – the author wrote the 2013 Doctor Who novel, Shroud of Sorrow, but he’s recently been going through a difficult time. He overcame throat cancer in 2016, but has now had the terrible news that he has a tumour in his lung. As a result, he continues to be unable to do the school visits which generated much of the income he needs to support his family.
But you can help him. Not only by going through his Just Giving crowdfunding page, but also by buying a collection of Doctor Who short stories, A Second Target For Tommy. This is a sequel to 2016’s A Target for Tommy, written by a selection of fans who really want to support their friend. It was immensely popular, so this second volume is a lovely addition to all libraries.
This is actually an extra-special release too – because, for the first time ever, it features the script of a crucial scene from an early draft of Doctor Who’s 50th anniversary special, The Day of the Doctor – featuring the Ninth Doctor, Christopher Eccleston. It’s kindly provided by outgoing Who showrunner, Steven Moffat! Here’s the final cover, with art by the superb Nigel Parkinson (Beano): 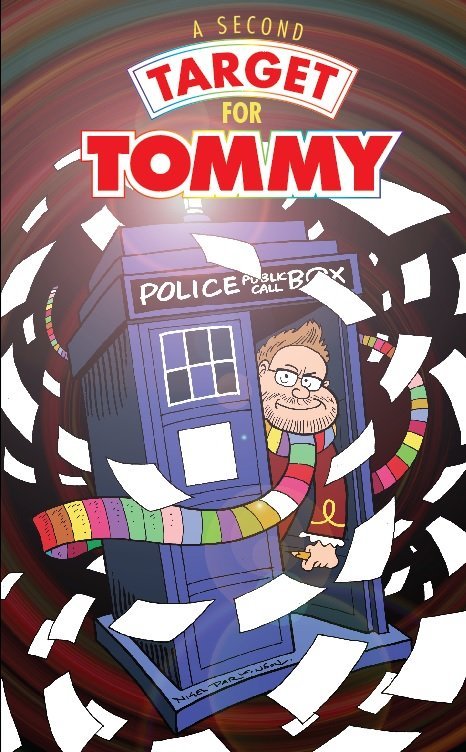 With stories from over two dozen writers, every penny of profit raised will go to support Tommy while he works on making a full recovery. Here’s the full list of stories and their respective writers:

At the moment there are no plans for an ebook version of the book, and we’re certain the paperback will sell out very quickly.
Pre-order yours now, from Obverse Books!

Read Exclusive Day of the Doctor Script in Charity Book, A Second Target For Tommy

by Philip Bates time to read: 2 min
Merchandise Andrew Cartmel and Ben Aaronovitch Return to Write…
Merchandise The Enemy of the World: Special Edition DVD Announ…
0
%d bloggers like this: