Spoiler-Free Reviews Round-Up: The Woman Who Fell To Earth

There’s a small chance that you’ll have heard Jodie Whittaker is the first female Doctor, and debuts tomorrow in The Woman Who Fell To Earth. Written by Chris Chibnall, the episode kicks off Doctor Who Series 11, and further introduces new companions, Yasmin Khan (Mandip Gill), Ryan Sinclair (Tosin Cole), and Graham O’Brien (Bradley Walsh).
But what did those lucky enough to have seen it already think? Let’s find out…
The good news is, reviewers seem to like Whittaker – and that’s important because she’ll be the face everyone sees, however much many fans are just as intrigued/worried about the direction Chibnall will take the show.
“Whittaker is a breath of fresh air: a talented, emotionally engaged actress who brings warmth and humanity to a show that was largely in danger of disappearing up its own black hole,” writes Ben Lawrence of the Telegraph. “From the outset, she proves to be a charismatic presence, righting alien wrongs in the gleaming metropolis of Sheffield (of all places).” The Guardian’s Martin Belam agrees: “Towards the end of the episode, as Whittaker confronts the alien menace, viewers are left in no doubt that she is very much the Doctor. She delivers a speech which could have been written for any of her predecessors, and which outlines the very DNA which has kept the show running for 55 years – about embracing change while respecting the past, and always trying to do the right thing.”
Den of Geek’s Simon Brew is just as concerned about the wider cast: “What really impresses about Jodie Whittaker, and there’s a lot here, is her generosity. She’s very much a part of an ensemble, a performer who doesn’t need the limelight in every shot, and as such, whilst the leader of the gang, an actor who can be part of a group.”
“Slightly surprisingly, Ryan’s story is front and centre from the beginning of the episode (Walsh and Gill are important, but less central), and his relatable struggles – he’s more concerned about finally learning to ride a bike than saving the world, at least to begin with – epitomise the sort of grounded Doctor Who story that new series boss Chris Chibnall has previously done so well (see 2012’s The Power of Three),” says the Radio Times’ Huw Fullerton.
Cultbox expands on this idea: “[T]here’s something that’s handled very early in the opening episode around one of those characters that just deserves flat out applause. Something one of the characters is up against that’s handled so well, feels so important, without ever feeling like it’s there for the sake of it. Personally, I just want to shake Chris Chibnall’s hand for it.”
So what has Chibnall done with our beloved programme?
“The Woman Who Fell To Earth is both dark, witty, and although far from perfect, is just the breath of fresh air fans have been gasping for,” writes Adam Miller for the Metro. “Gone are the often questionable special FX and embarrassingly meek villains, series 11 more than delivers on Whittaker and [Chibnall’s] promise of a cinematic Doctor Who.” Cultbox goes on, “There’s a good monster, there’s reworked music that has a familiar foundation, there’s a sci-fi plot and there are some good jumps too (Jamie Childs directs this one, and very, very well).”
“While the main villain is genuinely unsettling, the episode’s sci-fi element feels a bit undercooked,” C|Net’s Richard Trenholm contrasts. “Amid the introductions and family dynamics, there isn’t a huge amount of space for aliens and monsters, and this is definitely the weakest part of the episode compared with previous new Doctor intros like Deep Breath and The Eleventh Hour.”
(Helpfully, he writes about an element many of us will be just as interested in: the theme tune. “New composer Segun Akinola also reimagines the legendary title music with elements of the original theme created by electronic music pioneer Delia Derbyshire back in 1963, and it has a harsher, more percussive feel than recent themes. Just the thing for scaring young viewers — as it should be.”)
Meanwhile, the Guardian highlights another star of the show. “Sheffield is a star of the episode in its own right, with both the surrounding Peak District and the city’s industrial heritage featuring heavily.”
The Radio Times sums up, “Simply put, Doctor Who has never looked better, from some visually-arresting locations – the most scenic areas of Sheffield get a good showing – all the way to the special effects from new VFX team Double Negative.”
Overall, it looks like we’re due a solid start for Series 11 – a good display of the new TARDIS team with a slower-paced narrative that’s mainly there to bring them all together.
Keep an eye on the DWC for our exclusive review!

Spoiler-Free Reviews Round-Up: The Woman Who Fell To Earth

by Philip Bates time to read: 3 min
Features The Woman Who Fell To Earth: Where in Doctor Who H… 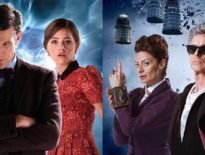