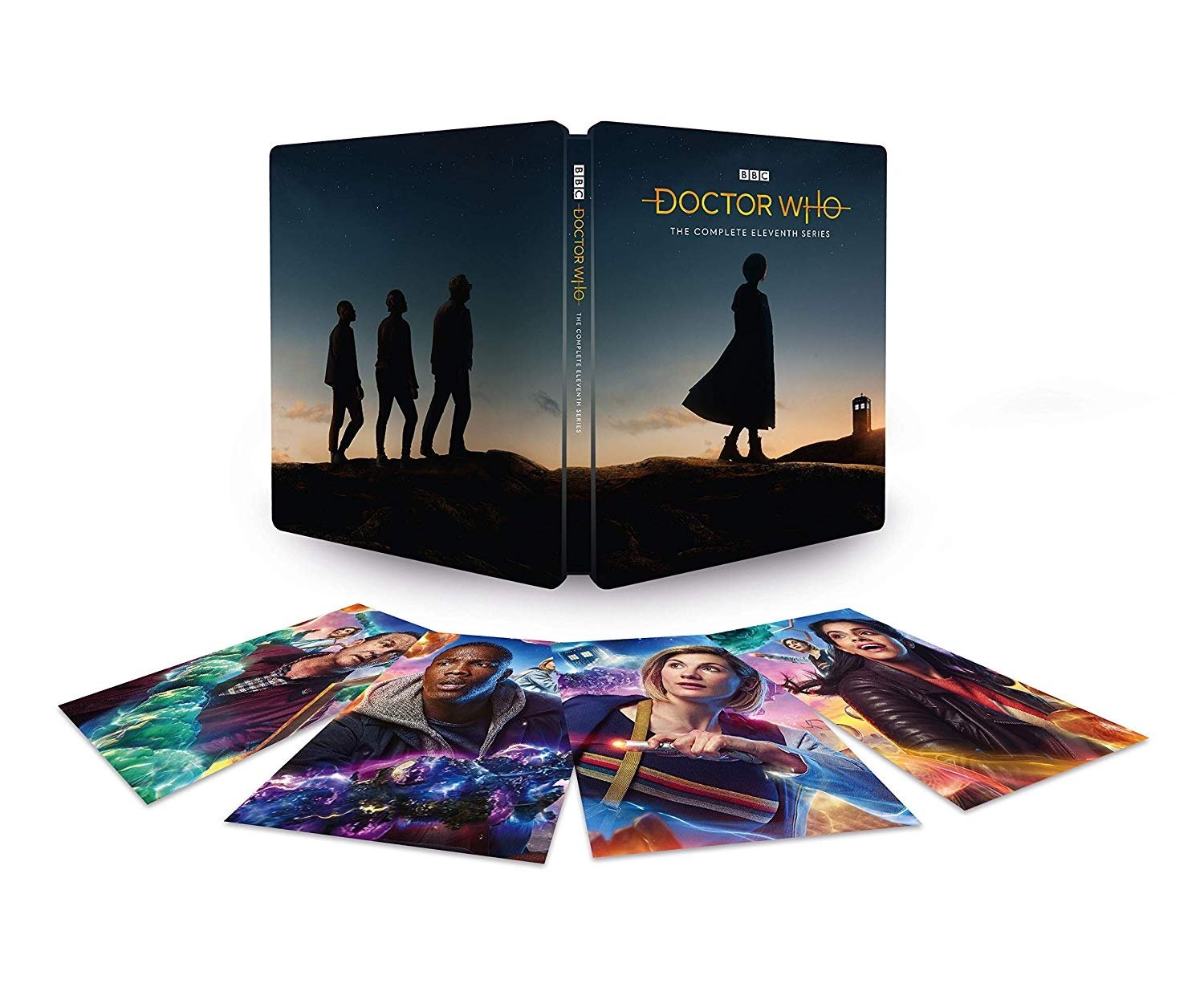 Jodie Whittaker’s first series as the Thirteenth Doctor is out now on DVD and Blu-ray, as well as an Amazon exclusive steelbook.

I bought the steelbook version. More money than sense, right? Maybe but the cover has what I like to call The Dooley Photograph. You know. The iconic one. The cover for the ordinary box set is the group photo and looks rather cartoonish. I am not sure it is worth paying the extra to get a decent cover, but, man, that’s an awesome cover.

Don’t expect an episode with a, say, Dalek in it. That is for a future release. You do get The Woman Who Fell To Earth, The Ghost Monument, Rosa, Arachnids in the UK, The Tsuranga Conundrum, Demons of the Punjab, Kerblam!, The Witchfinders, It Takes You Away, and The Finale With The Absurdly Long And Forgettable Title. That one.

I am not going to spend a long time on the episodes themselves. They have already been dissected/ reviewed in great depth. (Yes, let’s go with that.)

Most of the discs contain what you’d expect in terms of extras: the ‘Behind Closed Doors’ featurettes that accompanied each episode. Like the extras we used to get during Mr Moff’s era, they spend a great deal of time telling us why the episode is great and why we must love it. There is little in the way of new information. But my expectations were not high. These pieces are, after all, a form of retrospective teaser trailer. The problem I have is not that they are bad – they are okay. However, like the series itself, they feel a little inconsequential.

There are commentaries on five episodes, but confined to the first two (of four) discs. The commentary for The Woman Who Fell To Earth features Jodie Whittaker and Jamie Childs (director). It is a treat to have the Doctor commenting on her debut episode; I wish Christopher Eccleston and Peter Capaldi could have been prevailed on and have done the same for Rose and Deep Breath. Mandip Gill (Yasmin Khan) comments on the rest, while writer, Malorie Blackman covers Rosa. Directors comment on their own episodes too. The commentaries come across naturally, like friends enjoying a natter and are worth listening to. (Am I allowed to end a sentence with a preposition? Too late: I have.) I could have wished (and do) for commentaries on some of the later episodes and especially contributions from Bradley Walsh (Graham O’Brien) and Tosin Cole (Ryan Sinclair). A real bonus would have been Alan Cumming commenting on The Witchfinders, as he was undoubtedly its stand-out performance. Nonetheless, the commentaries we have are excellent.

On disc four, there is episode ten: The Battle of Raccoon av Kolos. What? That’s the title. Honest. No commentary. But then there are the extras: thousands of them. And, by thousands, I mean literally thirteen. These include a featurette on the design of the new TARDIS, casting the new Doctor, and the companions. The usual suspects, in fact. The comment is made more than once that Fish ‘n’ Chibs (that’s showrunner, Chris Chibnall, for the uninitiated) is trying to make a new start. This is, apparently, different to what has gone before. Unfortunately, understanding what Mr Chibnall wants to do does not make me any happier with what appears on the screen; I am coming to the somewhat painful realisation that the programme does not belong to us any more. Maybe it never really did. Can anyone tell me how pre-teens are reacting to the new direction?

And then there is one last feature showing the team at play. I will confess that I like this one. It gave me an insight into the actors and showed them as real people. Likeable people. People who want to make the best programme they can. But liking the actors is not the same as being happy with the way they portray their characters. Just possibly I might bite my tongue or sit on my hands or whatever the ‘in print’ version of muting criticism is called. Seeing the actors as actual people with lives and characters should temper the force with which we critique them. Should but doesn’t quite. After all, we don’t set out to upset them, merely to offer criticism.

The extras are narrated by Shaun Dooley – Epso in The God Monument. Actor, narrator, and hobbyist photographer with an eye for a stunning photo. Shaun was good value in Series 11. See? It was worth getting the steelbook.

Watching the episodes again, two things struck me favourably: the theme tune and the opening credits. The music is reminiscent of the original back in 1963. Of itself, it is not quite enough to establish a link back to 55 years of Doctor Who interest but it is at least a start

The picture quality is excellent. That is to be expected. The sound also is good – again, par the course.

I did say that I wasn’t going to comment much on the episodes themselves. But as they are the point of the collection, I suppose I ought to at least mention them. On the original run, I found it difficult to watch the episodes more than once. In previous years (even Series 9 which I hated), I watched three or four times. Last year, I struggled to care enough. It is not so much that there are any absolutely abysmal episodes (other opinions are also available) but so many of them are dull. And by ‘so many of them’, I think I mean ‘all of them’. For so many contributors, Series 11 was the season where mediocrity was the highpoint of the run.

The extras are good but rarely spectacular. The commentaries are fun. The packaging is brilliant. And therein lies one of the problems: the cover might be the best thing about it. That can’t be healthy, right?

The biggest problem I have with this boxset is that it has those episodes in it.

Still, if you’re a completist, or especially enjoyed seeing a “new direction” for the TARDIS, the Doctor, and her “fam” (shudder), you’ll want to add this to your shelf.