When asked to pick a Black Archive to review, I said Marco Polo as it was one of the most sought after of the missing episodes. Having jumped into this book, I take it back – it is the Holy Grail, surpassing all others. In this edition of Obverse Books’ Archive, Dene October simply clues us in on how much we’ve really lost. As is the norm with the Archives, they tend to go DEEP. So deep they nearly end up coming out in Cathay. That’s the case here with this wonderfully informative and comprehensive analysis by an obsessed fan and author. Thank goodness for him. Here, we receive a Mongolian horde of facts, parallels, and observations, broken down into seven chapters.

During the story’s transmission, children had been writing in, complaining they wanted the Daleks back, not “some dumb old map”, yet Marco Polo’s final episode hit a new viewing record, being seen by over 10 million viewers for the first time ever. This pure historical was a HIT. So much so, Disney even offered to buy the adventure and turn it into what would have been the first big screen Doctor Who feature film! The BBC… turned them down. Instead, we eventually got the Peter Cushing movies.

When the BBC wiped this story, they lost quite a triumph. You’ll have heard a lot about Barry Newbery’s elaborate set design work and the lavish costumes by Daphne Dare. The author touches on these by seeing the historic originals through the real Marco’s eyes and in his writings. As for the serial’s direction: the camera script still exists with intricate instructions as to how Waris Hussein prepared all his camera movements to aid in communicating the visuals. This is blended in with how we communicate visually, how we see the world consciously as subconsciously. Everything is touched on, on many levels. For the serial though, Hussein managed to craftily present a sweeping epic, ranging from the “roof of the world”, through the Gobi desert, to the palaces of Kublai Khan. All with a limited budget and filmed in the smallest, most archaic studio available, Lime Grove D.

And it’s the things we lost. For instance, the girl in Polo’s care, Ping Cho, does a type of poetic dance that shows the admiring cast a story with meaningful gestures. Reconstructions don’t quite do the job. That’s why this is one story I really would like to see animated – in colour, actually. I say bring back Waris to direct it, too, as it’s also made clear in the book and elsewhere that he was hog-tied with the limited equipment he had back then. Having him oversee an animated production might be a blast for him, letting him use the camera angles and techniques he would have used back then.

October examines meanings within meanings, extrapolating or referencing obscure quotes, authors, theories perhaps too deep for the average reader who just wants some fun Who facts. But this is the Black Archive, where analysis is analysed. At times, these observations can seem like a bit of a reach. However, it’s often worth it; for example:

“The title of episode four, ‘The Wall of Lies’, is a provocative one, a reference perhaps to how television transmits virtual worlds into the contemporary caves of our living rooms. Or how reality is shaped through mediation, making it hard to tell truth from fiction.”

The author matches his seven chapters to parallel themes within the seven episodes of the serial. The Doctor and co. meet the Khan in episode six. Therefore, chapter six, “Mighty Kublai Khan” goes in depth about the man himself, Polo’s and others’ writings about him, and his grand summer palace.

Dene October may be in a unique position, having actually seen the story twice. This, when he was 5 and 6 years old respectively over two years in Britain and Australia. It really seems to have left an impression. This man knows his Marco Polo and the writings about him. It almost takes the sting out of missing the Doctor Who episodes, as there’re plenty of writings on the real man and his travels to go around. So, if you’re keen on having an electron microscope analyse this story on an almost molecular level, or just want to know a lot more about Marco Polo in general, this edition of The Black Archive is a great place to start.

The Black Archive #18: Marco Polo is out now from Obverse Books. 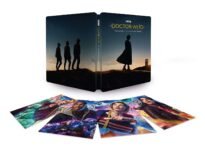