Or, if, you will, The World Is Not Enough. And of course, spoilers for Spyfall Part 2 follow, so read at your own peril! Ooh, that’s the sort of tension you might get from, I don’t know, a James Bond movie or something, right?

So, Who Believers, in the past, we would’ve summed up a big-budget, globe-spanning adventure involving motorcycle chases, New Year’s, and a maniacally murderous version of the Master in just five words: The Paul McGann TV Movie. Here in 2019, we would call it Spyfall, the promising two-part start to Doctor Who Series 12. After a globe-hopping Part 1, Part 2 debuted with no less than a crashing airplane, a time-jumping Doctor, and newly-minted Spymaster– er, Master.

Picking up mere moments after the Big Reveal of Part 1, namely that mild-mannered Agent O (Sacha Dhawan) is actually big meanie the Master, the Doctor’s companions find themselves on a crashing jumbo jet and the Time Lady (Jodie Whittaker) finds herself trapped between relative dimensions. It turns out that this version of the Master is very cross indeed, and has teamed up with a race of beings called the Kasavins in order to wipe out the TARDIS team and, you know, take over the universe and stuff.

Of course, nothing quite goes to the best-laid plans of He-Who-Must-Be-Obeyed and the Master eventually finds himself and the Kasavins defeated by the Doctor and her “fam,” Yaz Khan (Mandip Gill), Ryan Sinclair (Tosin Cole), and Graham O’Brien (Bradley “Watch Me Dance” Walsh). Between the Big Reveal at the end of Part 1 and another Bigger Reveal at the end of Part 2, there is actually a pretty snappy adventure that, at least for this reviewer, outdoes almost anything in Series 11. Standouts in Part 2’s story include the Doctor teaming up with two strong women from centuries past; Lenny Henry’s machinations as the slimy Mr. Barton (thankfully Sir Lenny has much more to do than Stephen Fry in his glorified cameo of last week); Graham’s bizarrely funny laser shoe dance attack; and a stark comment on corporations and privacy in the internet age. Even the main cast feels more comfortable in their roles, although Whittaker could still dial down the “shouty energy” from time to time and the companions could still do well with a bit of dialing up. Yaz, and especially Ryan, just feel… boring.

Spyfall Part 2 zips along at a Steven Moffaty pace and feels as Big and Epic as second-year showrunner Chris Chibnall and the BBC probably intended. Surely in order to woo back viewers after a mixed reception to Series 11, they have brought out the big guns: legendary guest stars, big-budget gloss, action(!), a beloved (or be-hated?) villain, and an over-arching mystery for the season. This Bad Wolf-like mystery is set up in a reveal in the closing minutes of the episode, as Dhawan’s Master chillingly tells the Doctor that he has destroyed their home planet of Gallifrey after finding out an ancient dark secret at the heart of the Time Lord empire. The Doctor quickly travels to Gallifrey in the obvious hope that he is lying, but is left shocked and saddened to discover only the remnants of the Master’s destructive rage.

This mystery — and the shock of a destroyed Gallifrey — is honestly much needed to keep fans and viewers interested, especially after the sagging Series 11. To this reviewer, though, the destruction of Gallfrey and its Terrible Secret can’t help but cause some problems. For one, are we supposed to believe that through all these years and incarnations that the Master (or the Doctor for that matter) has only now learned of an ancient cover-up by the Time Lord “founding fathers”? And this secret is so, so horrible that it made him angry enough to destroy his own home world and people? And what about the “recent” achievements of the Doctor, especially since the show’s 50th anniversary? In mere moments, the Master has wiped out years of the programme’s plotlines, as the various past Doctors saved Gallifrey, hid it away from enemies, found it again, and revived it. It would be a shame if that was all swept away like it never mattered. Maybe everything will be explained in due time and we’ll all get a happy ending to Series 12, but at least for now, I have some concerns.

Overall though, Spyfall Part Two was a good capper to the opening adventure and did well to set up an intriguing central mystery and several other questions for the season to come. For example, have we seen the last of the Master, and how did he get from Missy to here? Are the Kasavins all that they appeared to be and have we seen the shiny last of them? From which website does a person order their own pair of laser shoes? Who is the mysterious Timeless Child… and any chance this youngster may turn out to be Baby Yoda?!

Until next time, keep reaching for the stars… and James Buckley’s green hair. 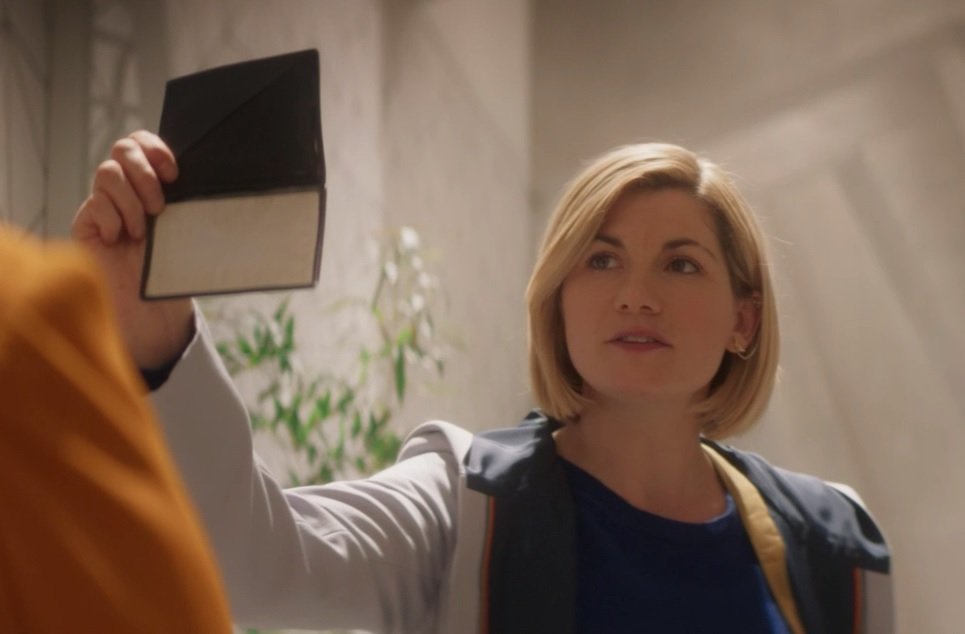