Reviewed: Doctor Who – The Timeless Children I believe I was eight years old. It was the school holidays and I was with my mum for the day. She’s a hairdresser and she took me with her to do a lady’s hair in a big, draughty old Victorian house. That morning I chose the clothes for myself: a smart white shirt with letters on the lapels, another striped shirt on top, and smart burgundy trousers.

That’s what I remember anyway. Forgive me if I am not clear on the details; it was 1982. I know that because Peter Davison was the Doctor and I wanted to be like him for the day. Not Peter Davison – The Doctor. Not even Peter Davison’s open-faced Fifth Doctor. I was going to be my Doctor. Doctor Me.

And, while my mum was hairdressing, I had an adventure. I was clever, brave, solved mysteries and fought monsters. Not with weapons, but with brilliance. I remember the lady looked at me and said to my mum, “Isn’t he cold in just those shirts?” My mother replied that I insisted on wearing that today, and she had no idea why. Of course, I was not going to tell her I’m the Doctor.

Now, for me, the adventure I had that day (and many other days) seems as real as Castrovalva, Kinda, or Earthshock. More real in some ways…

Fast forward 38 years and Series 12 was the first that we watched as a family with our five-year-old daughter. I think it’s a little grown up for her, but she found out last year that her eight-year-old brother watched Doctor Who when she went off to bed. After a lot of tears, we let her watch this series. Apart from saying, “Why is it always the lady Doctor?”, she seems to have enjoyed it.

After watching The Timeless Children on Sunday, I asked her what she thought of the episode. She said, “It’s actually about lots of people being the Doctor.” And that got me thinking. (I know this is a review, I’ll get round to that…)

Ever since The Deadly Assassin in 1976, we’ve had this 12 regenerations – so 13 Doctors – ‘rule’. Apart from when it wasn’t a rule, because Doctor Two says Time Lords can live forever ‘barring accidents’, or if you count the 507 regenerations remark that the Doctor states in The Sarah Jane Adventures story, Death of the Doctor. Or when they extended the rule in Time of the Doctor. But no one’s ever been that bothered by the rule… not really. We’ve had the Morbius Doctors (who made a comeback in this very episode), the Watcher, the Valeyard, the unseen future Doctor in Battlefield (ginger in the novelisation), the Dream Lord, the War Doctor, the Curator… And those are just a few on TV. Don’t get started on Big Finish, novels, theatre shows, films, comics, fan productions, cards in cereal boxes…

There is something about the programme and the central character that invites this unfettered multiplicity. No other ‘franchise’ – for want of a better word – welcomes one and all to create and shape in whatever way we choose. Doctor Who has never had a single point of origin, a grand plan or restrictions in story style, setting or scenarios. And the groundbreaking choice when Troughton’s Doctor was revealed as the same person but completely different to Hartnell’s was the catalyst for all this. That was the point at which everything, anything became possible.

There are certain stories in Doctor Who’s history that take great leaps with the legend. The Tenth Planet/ Power of the Daleks, of course, when the Doctor first regenerates. Then The War Games when his Time Lord origins are revealed. The Three Doctors put more than one incarnation together, and fleshed out a little of Time Lord history. Which was pretty rapidly contradicted – in many ways – in the aforementioned Deadly Assassin. It wasn’t until Remembrance of the Daleks that Omega and Rassilon were reconciled as founding fathers. And Remembrance is another legend-shifting story where it’s revealed the Doctor didn’t just run away from home because he was bored; he took a star-destroying superweapon with him.

The Cartmel script-edited era was meant to build to a big revelation about the Doctor and put the ‘who’ back in the title after years of him just being a renegade Time Lord off on adventures. The masterplan was cut short in cancellation, but that era was about to blow the lid on the Doctor’s presumed backstory…

Which brings us neatly back to The Timeless Children. Like me, you’ve probably read reviews, wrestled with the revelation that the Doctor has had a myriad of missing lives that she has no memory of. And worried whether this is a good development. Or not. Maybe you are firmly in the ‘not’ category. And I know where you are. I remember the TV Movie in 1996 and the whole ‘half human’ revelation. That the Doctor suddenly couldn’t shut up about and which became a major plot point. But then it got forgotten, and nine years later the Doctor is back calling humans ‘stupid apes’. Phew.

But there is no chance of that with the Timeless Child backstory; it’s not even possible to drop it without a proper explanation and move on like Series 9’s ‘hybrid’ conundrum. (Unless the prophecy is fulfilled in the Master/Cyberman fusion in this very story.)

What we know is that the already-in-pre-production Series 13 will directly continue this ret-continuity – at least, if it’s got any sense it will. Otherwise, like it or loathe it, why bother? But what did I think? Me? Or Doctor Me? That’s the purpose of a review.

Last year, I reviewed the Series 11 finale with a name that is so boring I can’t even be bothered to look it up and include it here. I tried to be positive (and was, a little). But I felt flat, like I was doing my duty to muster up enthusiasm for what should be the best programme on TV. And let’s face it, it wasn’t last year. For the most part anyway. But this year… it felt like it had that spark, the excitement back. More thrills, spills. Edge of the seat stuff. For the most part anyway.

And The Timeless Children was high on spectacle and exposition. But low on plot and character. The new Master is fab and expertly played. But he seems more like a Ringmaster here. What’s he trying to do? Humiliate the Doctor by telling her she’s the most important Time Lord in history? I know that he’s mega miffed the Doctor has given him the special part of his DNA. So why does he tell her that? Watching again, I was trying to hunt out the Master’s motivation for telling the Doctor all this. Wouldn’t an evil megalomaniac want to keep that to himself, or at least find a way to use it for his own ends? I suppose he does with his Cyber/Time Lord hybrids. But he didn’t need to tell the Doctor her history to achieve that.

Throughout this season when the revelations came – The Master, everything the Doctor knows being a lie, Gallifrey and Time Lords destroyed, the Ruth Doctor, the Lone Cyberman etc. – I kept seeing reviews and comments about having to wait for the full revelation before passing judgement. And I felt like that too. And still do. As big as these events have been, they left me feeling unfulfilled. Next year, it can’t be just another season of shocks: there needs to be consequences and some fulfillment. Otherwise, it is just spectacle.

Plus we need the non gear-changing episodes to be thrilling, well written entertainment. Not just fillers and down-time as many felt like this year. Even the adverts started announcing ‘only two more episodes’ before the big finale or some such. Which seemed to suggest: nothing to see here, come back in a week or two. And from the (largely) dwindling viewing figures, we know many people didn’t.

So back to eight-year-old Doctor Me. What the Timeless Child revelation allows is for Doctors aplenty, child Doctors, Doctors of all backgrounds, male, female and more… And that’s no bad thing for us wannabe Doctors, me and my daughter. But does it make our past TV Doctors, the ‘originals you might say’ a little less special? I hope not.

Jodie’s first season was just the bare bones; this one there was a little more meat but not much to hang it on – next year, what we really need is full bodied Doctor Who. And that way the Timeless Child will be more than just ancient history; it will become a living, thrilling story. And one that matters. Please.

Reviewed: Doctor Who – The Timeless Children 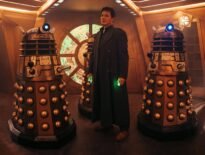 Doctor Who on TV Reviewed Reviewed: Doctor Who – Revolution of the Dal…