Celebrating Doctor Who Confidential: The 10 Most Memorable Episodes

When Doctor Who made its triumphant TV return in 2005, there was an extra special treat every Saturday night. The shock of having to wait a whole week for another episode was tempered by the show’s behind-the-scenes sister programme, Doctor Who Confidential.

Whether you watched straight after the night’s episode, or later in the week, it was always a thrill. Sometimes – don’t tell the showrunners – better than the episodes themselves. It made a star of Special Effects Supervisor-with-the-boyband-good-looks, Danny Hargreaves and animatronics and prosthetics wizard Neil (don’t you think he looks tired?) Gorton. The input from the Who production team, particularly Russell T Davies and Steven Moffat meant that they became stars and familiar faces alongside the lead actors.

It is said that the 1972 book The Making of Doctor Who by Malcolm Hulke and Terrance Dicks was the inspiration for many to write, create, and seek a career in television production. And I am sure that Doctor Who Confidential had the same effect on many a nine-year-old over its six-year run. It opened up a world of explosives, prosthetics, incidental music, script read-throughs, and foley sounds (I still pretend I’m holding a Sonic Screwdriver every time I pick up a winged corkscrew).

It also enabled us to glance behind the curtain and meet the actors who create the characters. I’m sure the public’s love for Christopher Eccleston, David Tennant, and Matt Smith was amplified by seeing them hard at work, but also having fun with the cast and crew. There is an argument that these glimpses ‘destroy the magic’, but we fans lap up all the magazines and books that peek behind the TV screen. Plus, if you really don’t want to be ‘spoiled’, don’t watch…

But many of us did, and right until the end. The reason Confidential was cancelled is not clear. The BBC was under pressure to cut costs and made ‘sacrifices’. But even showrunner Steven Moffat went on-record to call out the decision: “I’m not supposed to say it, but I’m going to anyway: bad day, bad decision,” he said at the time. “I know these are straitened times. I know we’re all at sea and the night is colder – but you don’t start burning the lifeboats to keep warm. Or to put it another way, you might want to think about the future if you’re planning to live there.”

Despite a petition to save the series gaining 50,000 signatures, the BBC stuck by its guns. Two years after it was axed, in a Radio Times website poll, Doctor Who Confidential was voted the best BBC Three show of all time.

In October 2021, it will be 10 years since the last DWC episode was broadcast. Since then, it has been largely languishing in the vaults. DVDs and Blu-rays feature ‘cut-downs’ of Confidential episodes. By my calculations (including special episodes), that’s around 40 hours of Doctor Who content unavailable to fans (roughly equivalent to the length of the 97 missing Doctor Who episodes).

Doctor Who Confidential always featured a brilliant soundtrack of current and classic pop hits (I’ve always meant to compile a playlist), so maybe it’s a rights issue that means they won’t get commercially released. But what about a repeat run on BBC Four, or put the whole lot for free on iPlayer?

Admittedly, some episodes were better than others. For me, the move from 30 minutes to 45 introduced a little more padding. Towards the end, it seemed like the production team were scratching their heads to come up with new areas of production to cover.

But in many ways, it didn’t have to be new every time. I’m sure my son (age nine) would love to see how Doctor Who is made now, even if it means covering ‘old ground’. We took him to the Harry Potter Studio Tour last year and as much as he was impressed by visiting Hogwarts Great Hall and Diagon Alley, the part that made the most lasting impression was the room full of models and prosthetics. It told him that he could be part of creating the magic too. At its best, that’s exactly what Doctor Who Confidential offered to children young and old.

So, here’s a personal selection of my 10 favourite episodes:

There was always a fear that new-new Who wouldn’t acknowledge its past. So, it was wonderful that after the Doctor’s triumphant return in Rose, we got to see reactions from Tom Baker, Peter Davison, Colin Baker, and Sylvester McCoy. Plus, the Eighth Doctor was featured alongside all his (then) predecessors in clip compilations.

All of Doctor Who was back.

Shown on BBC One immediately before The Parting of the Ways, this 45-minute episode was largely a compilation of previous Confidential content from the first series. But it felt like a celebration, a big two-fingers up at the naysayers and critics who killed off Who in the late ’80s and still believed it was ‘old hat’.

Now what would seem like a DVD extra for a niche audience was broadcast prime time on BBC1.

This was the Confidential to compliment School Reunion, the first episode to feature a major returning character from the original run.

Bringing back Elisabeth Sladen as Sarah Jane Smith (and K9) could have seemed like a fanboy move too far for a major drama series looking to attract a whole new audience. But it worked and Sarah Jane became even more of a phenomenon.

Seeing Sladen’s first take since she left in 1976 (actually she returned in 1983 too) is a wonderful moment, as is the cast and crew’s clear love for the returning actor and character.

Hailed as one of the greatest (and creepiest) Doctor Who episodes of all time, Blink is also significantly Doctor-lite. But we get more than our share of David Tennant in this side-step episode where the actor and fan examines his own love (and that of others) for Doctor Who.

Tenant speaks to Steven Moffat, Mark Gatiss, Gareth Roberts, Nev Fountain, Jon Culshaw, and Phil Collinson. It’s a love-letter to the show we all adore, and probably launched David Tenant as a TV presenter too.

By year three, the Doctor Who Christmas special was seen as an integral part of the BBC festive lineup. And while Voyage of the Damned didn’t quite live up to the hype (or its extended length), it still made a splash in the ratings, boosted by its extra-special guest star. Unsurprisingly, Kylie features heavily but for me the biggest delight was seeing snippets from vintage BBC Christmas specials including Porridge, Steptoe & Son, The Two Ronnies and To The Manor Born, with which Doctor Who takes its rightful place.

When Christopher Eccleston’s exit leaked, the BBC hastily announced David Tennant as his successor: a press release with a picture and a quote for all the news outlets. But what to do when the much-loved Tenth Doctor hung up his converse? Confidential to the rescue!

Back on BBC1, this special edition tantalized viewers, delaying the announcement of Matt Smith until near the end of the 30-minute show. And who can forget his first appearance, all wriggling fingers and furrowed brow…? Well, it will have to live in your memory since this epic TV moment has never been fully released commercially, and there have been no repeats or cut-down versions released on DVD.

This is one of those occasions when (arguably) the behind-the-scenes documentary was more fascinating than the show itself. Planet of the Dead is a solid adventure story but the production team took a huge risk which could have scuppered the show. The image of a London Bus in the middle of a desert (and not a quarry in Dorset) was irresistible. But first they had to get an actual bus 3,000 miles overseas to Dubai…

The resulting damage in transit of the vehicle, coupled with a lost day attempting filming in a sandstorm (out of a three-day shoot) shows that just completing the episode was a triumph. Thankfully, Confidential was there to capture it all.

Despite being set in the Italian city, The Vampires of Venice was actually filmed (apart from a few establishing shots in Venice itself) in the Croation coastal town of Trogir. This was so that it was a more authentic representation of the city in the 16th Century. But Confidential went a step further, pairing Matt Smith and writer, Toby Whithouse with Venetian Historian Francesco Da Mosto for an examination of the impact of the Black Plague in your actual Venice.

Like the sidestep with David Tennant in Do You Remember the First Time?, Doctor Who Confidential showed it was far more than just a making-of series.

The star of this show is Neil Gaiman, sci-fi and fantasy author extraordinaire who wrote the episode this Confidential accompanies, The Doctor’s Wife.

Always a fascinating subject, Gaiman takes viewers through the process of scripting the episode. But it’s the footage of the writer reading from his own script that provides some very special moments. But this episode also has one of the less enthralling segments when the regular ‘A Day In The Life’ series showcases the Catering team. Now I’m sure a hot drink and a hearty meal is essential on a long location shoot but, bless them, it’s just a catering van.

Yes, a sad place to end this selection. But it shows the Doctor Who Confidential team at its very best. It’s a tender, thoughtful, and big-hearted tribute to a much loved part of the Doctor Who family. Without Confidential in production and so much a part of the BBC lineup, I doubt whether such a tribute would have been made and broadcast on CBBC and BBC1. It features touching tributes from the young cast of The Sarah Jane Adventures as well as David Tennant, Matt Smith, Russel T Davies, and Katy Manning, and others. The most moving, but ultimately uplifting sequence being two stars of The Sarah Jane Adventures – Tommy Knight (Luke Smith) and Daniel Anthony (Clyde Langer) – reading tributes from children on the CBBC website. A tear, Sarah Jane…

If you have memories and highlights of Doctor Who Confidential (including memorable episodes missing from this list), please share them in the comments below…

Celebrating Doctor Who Confidential: The 10 Most Memorable Episodes 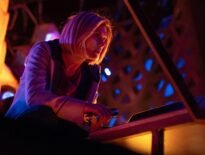 Features Here’s Everything We Know About Doctor Who S…