Recently, Jordan Shortman brought to our attention Russell T Davies commenting on how someone should be creating a Doctor Who shared universe. Intriguing, but oh so tricky.

First, any kind of shared universe — a quality shared universe — is almost as rare as a unicorn, needing a single, qualified visionary, with qualified right-hand people to help them see it through. The only two instances where they successfully pulled it off in movies was the old Universal monsters group 80 years ago, and the Marvel Cinematic Universe (MCU). That’s it. Sure, there have been other attempts but the two I name above have been the only five star, box office exploding, unqualified successes.

TV’s Arrowverse has been a mixed bag at best. The DCCU is mostly a mess with one or two gems, and the revival of Universal’s Dark Universe stalled right out of the gate. To make a recipe like that work is almost a miracle of gathering just the right creatives together in just the perfect storm. It’s like catching lightning in a bottle that needs to be surrounded by many other bottles, also managing to catch lightning.

It is not easy. We know this because Kevin Fiege (of the MCU) is the only maestro to successfully pull it off for the better part of a century.

But even if the powers that be even gave this serious thought, it would be the American version of Who all over again. The right pieces would have to fall in place.

Right now, I’m not sure Doctor Who has enough gas in the tank to even think about pulling something like that off. When RTD did The Sarah Jane Adventures and Torchwood alongside Doctor Who, that was barely a shared universe, considering some adults would never bother with SJA, while little kids wouldn’t be allowed to watch Torchwood. It was a somewhat flawed attempt, alienating at least a third of the audience with two thirds of the shows.

The point would be to cater to the widest audience, while still maintaining a quality edge, intelligent scripts, excellent casting, while mixing humour and drama.

One could argue that with Doctor Who now at its weakest quality in decades, it could use a prop up by the rest of the Doctor Who universe. But if Chibnall is in charge… well, I really don’t want him to be the puppet master in charge of new casting, ideas, shows, and storylines. I also don’t think the guy who eschews Christmas specials entirely would be on board for overseeing 5 different shows.

Conversely, if someone else puts forth another show from a different sector of the Doctor Who Universe, it might easily be superior to the main show at this point, and then where would we be?

Now, thinking out of the box, glass half full… if you wanted to explore a shared Doctor Who Universe, you might have to look at where Doctor Who currently is, then start peeling back the layers. See what you’ve got to work with.

Seems like the most obvious place to start is with Jo Martin’s Doctor. You could easily get a few series out of her adventures before she resorts to the arch, and reveal what she’s all about.

This of course leads us to myriad possibilities, with the other millions of past lives the Doctor has now allegedly had over the countless billennia.

Back on solid ground, there’s always UNIT. With stations all over the world (yes, we’re ignoring Chibnall’s need to trash it), there are certainly stories to be told there.

There’s also this bizarre fascination with showing the origin of a character, really focusing on them, then stopping before they get interesting, whether it was Smallville, Gotham, or Krypton. Seeing as how there’s almost too much to work with now regarding the Doctor, I suppose you could focus on the young, impressionable Master before he went bad. Perhaps a young man resembling Delgado. So no, not nuttier than a fruitcake here; just classy and interesting. Layered and complex, not a rabid dog.

Sure, you could attempt a Torchwood revival, but Barrowman’s not getting any younger — although he could bring in an all new team — but frankly, aside from Children of Earth, I’m not sure the franchise has acquitted itself that well.

I also don’t see past companions (Donna, Clara, Rose) coming back to do a satellite show.

Honestly, I really don’t imagine Tennant, Smith, or Capaldi coming back to take part in anything other than a huge anniversary special, and these days, even that is up for grabs.

There’s Jenny, or Sally Sparrow, but neither of them are cute, spunky kids anymore.

The adventures of Mickey and Martha? Maybe blend them into UNIT.

Thanks to new novels and audios, you’ve got maybe the only really viable, giant, shared Doctor Who Universe you can have. At least a half dozen Doctors at any one given time (crossing over and mixing and matching all the time!), Jago and Lightfoot, the Master –all of them — and alternate reality versions of all of them.

So, if you think about, Doctor Who has already cobbled together a shared universe of a sort, tailor-made to accommodate the time differential.

Maybe we should just be happy with that. 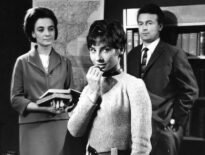 An Entirely Fictitious Account of Doctor Who An Unearthly Timeless Child: What If Chris Chibnal… 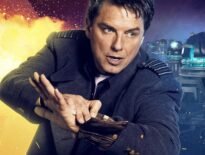