Big reveal: the missing story is An Unearthly Child. What do you mean, ‘it’s not lost’? I know it’s on Britbox, DVD, video cassette… But I don’t mean that An Unearthly Child; of course that one is not lost. I mean the other one. The one in my brain.

Back in 2013, the year of Doctor Whobilee, the half-century milestone you might say… I was watching the tellybox. It was Tuesday 15th October, 40 days until The Day of the Doctor. I was watching Rick Stein’s India episode two. Don’t judge me, it’s not all Who, Who, Who in the Shaw household. Sometimes we have to eat, and dream…

Cuddly Rick was on a culinary journey across India and arrived in the capital, Mumbai. Now, I love a curry, me. But I had never been to India. Fortunately, my job takes me to exotic places like Nepal, Cambodia, and The Democratic Republic of Congo (well, it used to anyway). We also work in India and I thought, yes, I’d like to go there, thanks.

So I was overjoyed that Mighty Logar had heard my plea. Three days later, I received an email from my head of department asking if I wanted to go to Mumbai for the weekend in November. Oh, yes please! Oh hang on! November! Not THAT WEEKEND. No, phew. Wednesday 13th November to Sunday 17th November. Ace! A quick visit to Mumbai, grab a curry, and back in time for tea (and Doctor Who on 23rd November).

So, that’s what I did. On my British Airways (note that) flight out, I looked to see what entertainment was available and, stone me, they only had Rick Stein’s India episode two. Logar! A sign! So I watched once again, fell asleep, and dreamt of that curry in Mumbai. This is an important point. I always sleep on flights (note that too).

Now, you don’t want to read about my adventures in Mumbai. Do you? No. You want to know about the missing Doctor Who story trapped inside my brain. Patience, child! The only Who event of note was the YouTube bomb The Night of the Doctor that dropped on Thursday 14th November 2013. The wi-fi was on my side, so I watched the marvellous McGann minisode a couple of times, put on my eating trousers, and headed out for a curry…

We ate at The Leela Restaurant (no really) which was opposite our hotel. Over dinner, I exclaimed, “Enjoy your death, Rogan Josh! As I enjoyed eating you!” Later I pulled out a large blade and said, “It’s a good knife. Aren’t you going to eat?” Then picked up a curried shank of lamb in my hands, sliced it, and took a bite. How I laughed. On my own.

Mumbai was a good place to visit. Didn’t get to see much as we were stuck in an office most of the day. But I did visit The Gateway of India and went to a spice market. Simpler times when we were allowed to, you know, leave the house and that. Yes, I’m getting to the missing Doctor Who story trapped inside my brain. It’s still there.

On Sunday 17th November (seven days until the TV event we’d all been waiting for – Doctor Who Live: The Afterparty), I boarded the BA flight home. Settling into my seat, I searched for some in-flight entertainment. On a whim, with the wind in the right direction, I happened to search for ‘Doctor Who’ (it was that kind of year). And two results came up. I could not believe what I had stumbled upon. The top result was The Day of the Doctor. Yes. THAT Day of the Doctor. A whole week before transmission.

I looked around to see if anyone from the BBC or UNIT was watching. The coast was clear. I leant forward to press the play button. Then stopped. The girl sat next to me observed my hesitation and asked, “What are you waiting for?”

“Do I have the right?’” I replied. “Simply touch my finger against the screen and that’s it. The Day of the Doctors exists. Hundreds of millions of people, thousands of generations will think I am a jammy git, and not able to wait a week to watch it with a load of friends in a cabin in a holiday park we’d rented specially for the occasion.”

“Good point,” the girl replied. ‘Watch it in a week with your friends and family. That seems like the right choice.”

“Sod her,” I thought and pressed the tip of my finger against the screen. Nothing happened. I tried again. After about 50 to 300 presses, until I was restrained by a flight attendant or three, I concluded that it might not work. Then I looked at the small print under the listing: ‘This content will become available after the 23rd November 2013.’ Logar was testing me.

What about the other result? Result! More Doctor Who. Not the 50th anniversary special but another treat. It was An Unearthly Child. No, not THAT An Unearthly Child. This was an audiobook reading of a brand new exclusive adaptation by Nigel Robinson, read by William Russell. That would do. Yes, what better thing to listen to a week before the anniversary…?

So I put my headphones on and pressed play. This time it was right, it would work, and no one would have to miss out on anything. This is where I kind of wished I’d paid more attention. I listened and very much enjoyed this re-telling of an age-old tale for an hour-or-so. And nodded off. As I said earlier, I just snooze on planes. But my subconscious brain must have absorbed the whole thing. Hopefully.

You see, pretty soon after, a strange thing happened. A few weeks prior to the release of Robinson’s adaptation in late 2013, the publisher AudioGO entered administration. A new release date was set for November 2014, this time from Random House. But it was subsequently pulled because of “rights issues”. As of today (and tomorrow, probably), no new date has been announced.

The adaptation is locked (almost) unheard in the vaults. Like Missy. Only slightly less psychopathic, probably. Like most things that TV chef Rick Stien has manipulated me into doing over the years (don’t ask), I put it behind me.

Then, earlier this year, I watched Can’t Get You Out of My Head: An Emotional History of the Modern World (not all Who, Who, Who, remember). It’s a six-part BBC documentary series by Adam Curtis that explores individualism, collectivism, conspiracy theories, national myths, American imperialism, the history of China, artificial intelligence, and the failure of technology to liberate society in the way that technological utopians once hoped it might (I have to acknowledge the chap who writes Wikipedia here: thanks Gary).

In one episode, Curtis features the story of Abu Zubaydah, an Islamist fighter in Afghanistan in the 1990s. When a piece of shrapnel is lodged in his brain, it wrecks Abu’s sense of identity. He can’t stand the confusion in his mind. Bits of his memories from childhood to today (or tomorrow, probably) come flooding back, all mixed up and in the wrong order. But it’s all vividly there.

I suppose the series is meant to make you question the power structures and political intrigue that have shaped our modern world. But it made me wonder whether I can somehow (perhaps with a well-placed blade from a Sevateem warrior) delve into my brain and scoop Nigel Robinson’s An Unearthly Child out. Either that or they could settle the rights issue and release it on CD. Whichever’s quicker, frankly.

So I contacted Nigel and he confirmed to me that, “the audio was made available to BA in-flight, I believe. [Sure was.] But then it hit copyright problems and it was never released – maybe one day. I haven’t even heard it myself.”

It’s in my brain, Nigel. And you are welcome to come and get it out. Bring a knife. TV chef Rick Stein will probably lend you one.

[Note: we don’t encourage readers to use knives to dig information out of people’s brains. A decent spork will do just nicely and they even do a sonic screwdriver spork now — have you seen those?] 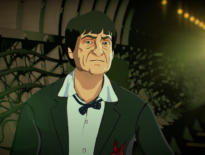