Georgia Tennant is returning to play Jenny, the Doctor’s Daughter, in a new set of stories from Big Finish — and will face off against the Cybermen!

She’ll also run into Dorium Maldovar (Simon Fisher-Becker), and be reunited with bounty hunter Colt-5000 (Siân Phillips) in a showdown that could come with a cost…

Here’s what to expect from Jenny – The Doctor’s Daughter: Still Running, which is due out in November:

Jenny was made as a soldier but has a Time Lord’s heritage – and that Time Lord is the Doctor. Exploring the universe, Jenny found a friend – Noah, a mystery boy from nowhere.

Together they’re ready to save planets, fight monsters, and save the day with nothing but wit and instinct – and an awful lot of running.

Inside the Maldorvarium by Adrian Poynton

Jenny and Noah find a priceless item up for auction at a disreputable venue – with an even less trustworthy owner. Dorium Maldovar might seem pleased to see them, but what’s his real agenda? Is Jenny here by chance, or is someone spinning a web…?

On a utopian world, the perfect society toils towards its worthy ‘Cause’. But the hard-working Suits are more than they seem, and the Department Head is something else altogether. And when Jenny and Noah scratch the surface, they find silver underneath. The Cybermen are coming…

When Noah and Jenny mosey on into the Old West, it’s surely a coincidence that Jenny looks exactly like the town’s most notorious outlaw. But as they’ll discover, anyone who crosses ‘Calamity Jenny’ suffers an unlucky fate – and it’s usually fatal.

Her Own Worst Enemy by Lisa McMullin

Jenny wants bounty hunter cyborg Colt-5000 off their trail once and for all. Her plan involves cybertech founder Seavus Colt, time travel, and showing somebody the true value of their life. But the web of time can’t be pulled apart without a cost…

“My favourite Who monster is the Cybermen – I did a school project on Doctor Who (unsurprisingly) when I was about 7 years old, and I specialised in the Cybermen, so her meeting them is a dream!

“And her and Noah’s sibling relationship has developed in this series – they’ve got to know each other much better. Each has a quality the other one doesn’t have. Jenny’s a bit more reckless, and Noah’s a bit more steadfast and reliable.”

Merchandise Christopher Eccleston Returns to Doctor Who for a … 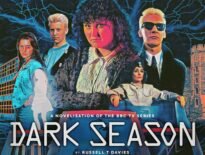