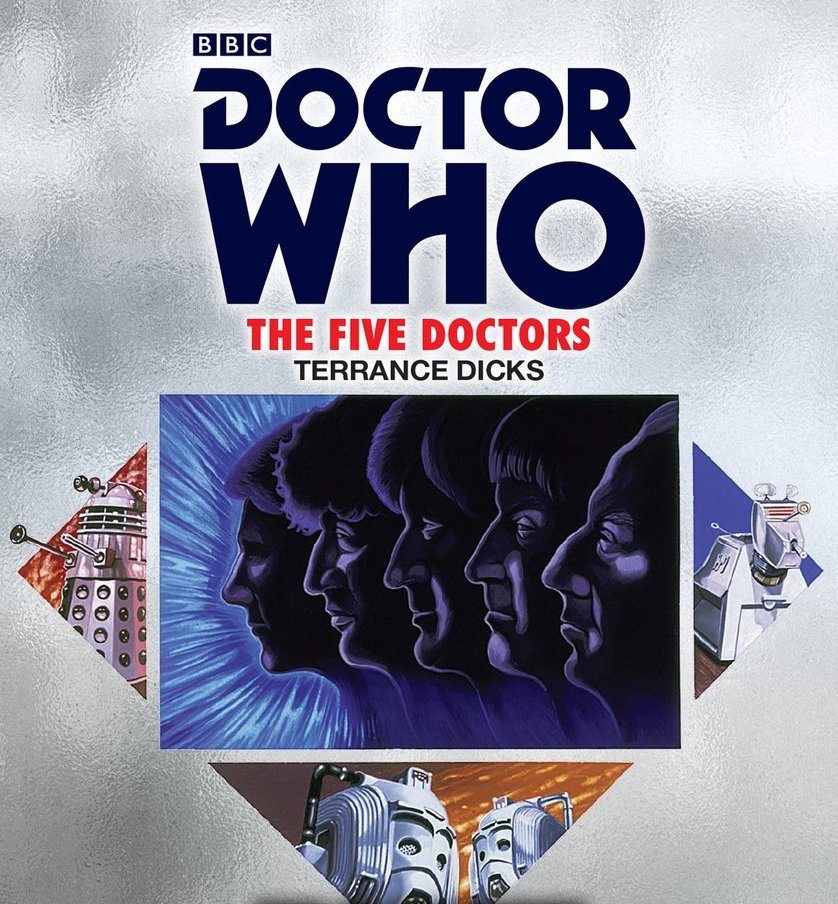 I can distinctly remember buying The Five Doctors paperback; it was the Saturday before The Five Doctors was to be screened during Children in Need 1983 and I was astonished to see the book available before it was broadcast.

The bookshop, now long gone, was in the Harvey Nichols end of Sloane Street, Knightsbridge, and I recall being a little bemused that the Sloane Ranger (remember them?), in front of me in the queue at the till, paid for her book – a measly pound – with a credit card! How times change…

Presently, I was the proud owner of a first edition paperback copy with its silver foil cover. However, I couldn’t read it yet it as I didn’t want to have the story spoiled when I watched The Five Doctors the following Friday.

I kept the book, but it remained unread for 38 years. Until now…

There is always a bit of nostalgia picking up an old Target novelisation; if I ‘read’ any books these days, they tend to be the audio book version as, as with Big Finish or podcasts, one can do other things while listening, but an actual printed book demands one’s complete obedience and an accommodation of time.

Thus, just like the early Eighties when I devoured as many Target books as I could find, I found the time and gave my obedience to Terrance Dicks’ The Five Doctors. There was one major difference this time: I now need reading glasses.

But enough of my rambling. What of the book itself?

The Five Doctors is a fairly simple tale and Terrance Dicks’ novelisation of his own television story tends to align itself very tightly: collected characters make their way to Rassilon’s tomb and watch the ‘baddie’ get thwarted by his own corrupted desire, and then everyone goes home.

But the longer one thinks about it, The Five Doctors is Doctor Who’s version of Raiders of the Lost Ark (according to The Big Bang Theory). Remove the Doctor(s) and the main plot is still intact as it’s the Master that does all the legwork. The first three Doctors’ sequences are of how they travel into Rassilon’s tomb avoiding adversity and the Fifth Doctor is there to ultimately confront The Player so he can explain his plans; The Player being the name Terrance Dicks gives to the unknown figure, at the beginning of the book, who is carrying out the Death Zone kidnappings.

Oh alright, I’ll concede that without the presence of A Doctor, the fate that befalls The Player would have been served to the Master, but that is the only pivotal moment I can see. Please feel free to put me straight in the comments section…

However, being an anniversary story, it was all about getting a good selection of the Doctor’s past companions and monsters on screen and that can only be hung on either a very simple story or a very complicated one. On television, and for the sake of mass appeal, it has to be simple; which it most certainly is. Even so, the Daleks, K9, Jamie, Zoe, Captain Yates, Liz Shaw, Roman,a and the Fourth Doctor (obviously) make very brief appearances. It is a different situation with The Day of the Doctor as they didn’t try to do the same thing as The Five Doctors. Day only had a pinch of nostalgia; not a bucket full.

But that’s not to say that The Five Doctors book is bland: there are instances of the macabre. There is a rather unpleasant passage where a charred dead body is struck by lightning, “making it dance and twitch like some ghastly parody of life.” See also the grim detail of the Raston Warrior Robot’s slaughter of the Cybermen where we are treated to descriptions of arms and heads being violently amputated. Substitute Cybermen with a troop of humans and that becomes quite gory. Not to mention the horrific punishment meted out at the end; just think of the mind-boggling enormity of that fate and that the First Doctor encourages The Player into it!

There are some extra moments here and there. For example, there is a small description of New London – London rebuilt after The Daleks’ Invasion of Earth – where Susan Campbell nee Foreman now lives and has three children. Although, it is strange that Susan gets this big build-up. The First Doctor treks to Rassilon’s tomb, within the Dark Tower, with Tegan. Susan, after a small altercation with a Dalek, becomes surplus to requirements and ends up staying in the TARDIS, along with Turlough.

A special mention for an unintended moment of comedy. While the Third Doctor is trying to escape the time scoop in Bessie, the Doctor is described as “streaking down the road”. Oo’er missus… but it was nice to see my favourite often used Terrance Dicks description “crashing to attention”, but here it wasn’t a UNIT soldier but a Gallifreyan guard.

When we arrive at the final section – all protagonists meeting at Rassilon’s tomb – we are treated to a segment that harks back to The Three Doctors where the usual bickering resumes between the original trio, but the subject of immortality rears its head. Similarly, when the Fifth Doctor confronts The Player he exclaims, “Immortality? That’s impossible, even for Time Lords.” Nearly four decades later and that doesn’t seem to be the case anymore: we now have the Immortals (Can You Hear Me?) and a Doctor that is now part of that happy band (The Timeless Children). It’s difficult not to think of these things, when viewing or reading classic Who, now that The Timeless Child’s genie is out of its bottle.

Nevertheless, this Terrance Dicks’ novelisation is an easy read and that’s not a criticism. If it seems I’m rubbishing the story, I don’t intend to. I found it entertaining, but the novelisation is very limited in what it can do. If Terrance made this a more coherent and substantial novelisation, there is the danger that it would divert greatly from the original and the traditional Target books didn’t do that. It’s a story designed to celebrate the 20th anniversary on television. That gives this novelisation a bit of baggage.

Having said that, Terrance does give the Fourth Doctor a more coherent exit; returning him and Romana to the punt on the river Calm and not just replicating the most aligned piece of film that could be salvaged from Shada.

Of course, Target books were aimed at a young age group; I read most of my Targets from the age of 15 and Terrance Dicks’ simple prose helped in so much that I could get through quite a few books in a short space of time. Having Dicks’ name on the cover always meant that I would remain engaged.

The only other writer – that I have experienced – that is in the same camp is Ian Fleming: clear, concise, and keeping the action flowing.

I am very VERY grateful for the Target novelisations and the Terrance Dicks ones especially. Not only did they provide an insight into the vintage stories that I thought I would never see (that old cliche), they greatly improved my spelling, which was pretty abysmal during my school years. If only I’d started the read them while a little younger, my English grades might have been a bit better.

Doctor Who: The Five Doctors is available to read as part of the anthology title, The Essential Terrance Dicks: Volume Two. 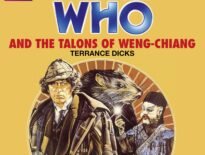