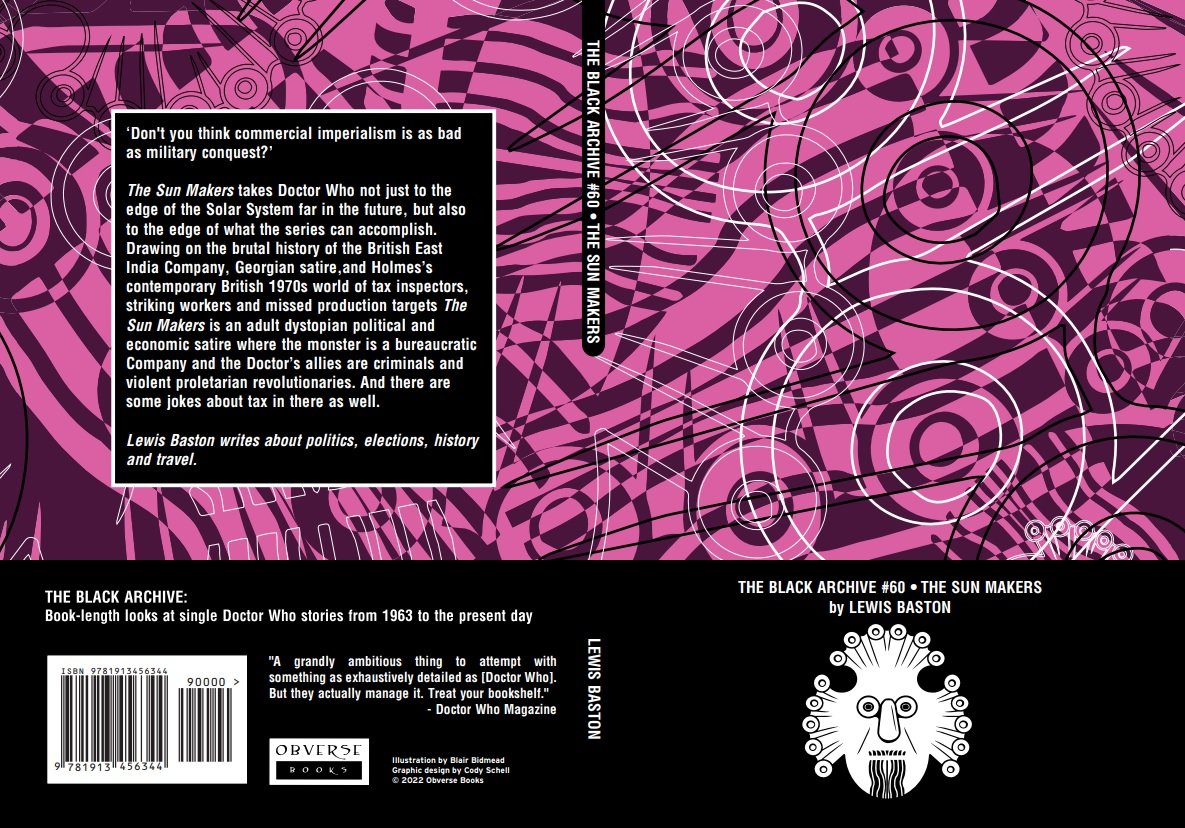 The Doctor’s words in Part Three of Robert Holmes’ incomparable 1977 story The Sun Makers always bring tears to my eyes. Here is the Doctor as he should be: a fearless champion of human beings and freedom, enraged by evil and leading the fight to crush it. This is, I think, Doctor Who as it should be.

The Sun Makers is one of my favourite stories of the past 59 years. My understanding and appreciation of it has been hugely deepened by Lewis Baston’s first class study for The Black Archive. This is a scholarly, stimulating, and immensely readable book. Learned and informative, it pays tribute to Robert Holmes as a writer of learning and genius, and brings back the Seventies in all its grungy splendour.

The Sun Makers has long been recognised as one of Doctor Who ’s rare satires, but there has been much head scratching about what it actually satirises. Baston quotes Jeremy Bentham, who said, in the early 1980s, that it was “steeped in left wing propaganda”, and notes that others have claimed it as a right-wing satire against the freedom-crushing evil of taxation. Baston himself makes a good case for The Sun Makers as a logical extension of neo-liberalism:

“Market economics, operating at interplanetary level, provided suns, breathable air and  gravity, all highly costly, as the Collector tells us. The Company is a commercial enterprise  responsible to its shareholders and expects a competitive rate of return on its investment… [Humans are] ‘not a good workforce in any case’ and the human cost of shutting down Pluto is not his problem.”

We learn much from the book about Robert Holmes. Having served in Burma in the Second World War, Holmes read widely about imperial history (and speculative science) and his wide reading and learning informs his writing for Doctor Who. The Company is modelled on the East India Company, an extraordinary private enterprise that ran large parts of India until the mid-19th Century and was separate from the British, Imperial government. The East India Company had its own army and ruthlessly extracted taxes from a terrorised population. The taxmen were called Collectors.

Baston argues that the quips about taxation are essentially jokes on the surface of the text, arising from Holmes’ temporary irritation about his tax affairs in 1977. They do not constitute or justify a right-wing reading of the text – everyone grumbled about paying tax in the Seventies – and The Sun Makers is actually a satire of free market economics, oppression of the working class, and unrestrained, ruthless capitalism. It is also, as Baston frequently points out, wildly funny.

Baston is very good on the conditions of production in 1977, when inflation was so high that the budget at the beginning of the season could actually buy something, while at the end of the season – although the headline figure was the same – it could buy much less. £20,000 (say) per episode was worth much less by the time of The Sun Makers than it was for Horror of Fang Rock. Simple set designs and shooting against the black studio drapes were imposed by economic necessity, which of course was turned into a virtue by creative and imaginative costume and set designers, who loved Doctor Who for the imaginative freedom it gave them.

I learnt a lot about Marxist economics, Robert Holmes, Imperial history, and some of the wilder 1970s science speculative writing (colonies on the moon by 2050, human beings wiping out inferior species on other planets in order to further our expansion into space) from reading Lewis Baston’s book. I wondered what Holmes would have made of Brexit, Boris Johnson, 18% inflation, and 300% rises in fuel bills in the UK, and how he would have transmuted them into a new satire for Doctor Who. But of course, Holmes has already said it: “Grinding oppression of the masses is the only policy which pays dividends!” Who will save us now that the Collector is in his – or her – seat again? Come back and lead our revolution, Doctor.

I hope Lewis Baston will write more for us on Doctor Who. What an intellectual treat and what a pleasure to read.

The Black Archive #60: The Sun Makers is available now from Obverse Books. 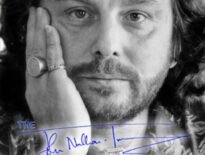