Unless you’re one of the rare breed known as “fashionistas”, getting clothes for Christmas can be a tad disappointing, can’t it? Oh, but wait! You might not be thanked for buying someone a boring jumper, but a family member or friend would be happier to receive a Doctor Who sweater!
Whether you’re searching for a major present or a stocking filler, clothing is a great way of showing off a Who fan’s allegiance to the greatest TV show in this galactic quadrant. Here’s a small selection of excellent gifts for your loved ones… They say you lose the most heat from your head, and that’s especially a problem is you’re an Ood. If you’re looking for a pressie for an Ood, or I guess any human who gets cold, this festive hat is perfect, locking in the heat for over the winter. Recipients might not wear it solidly from Christmas until March, which would lessen the effect; nonetheless, we’re certain it’ll do its job effectively.
It’s made by official licensee, Lovarzi, incorporating the TARDIS into a Christmassy design, complete with killer trees, killer snowflakes, and a killer Dalek (though it’s reversible, the Dalek feels right on the back – almost as if in stealth mode).
Because it’s made from Acrylic – not the paint – it’s guaranteed to keep fans nice and toasty as they explore the January sales. We hear this neat bit of knitwear is a bestseller on the Ood Sphere. Flippin’ cold there. 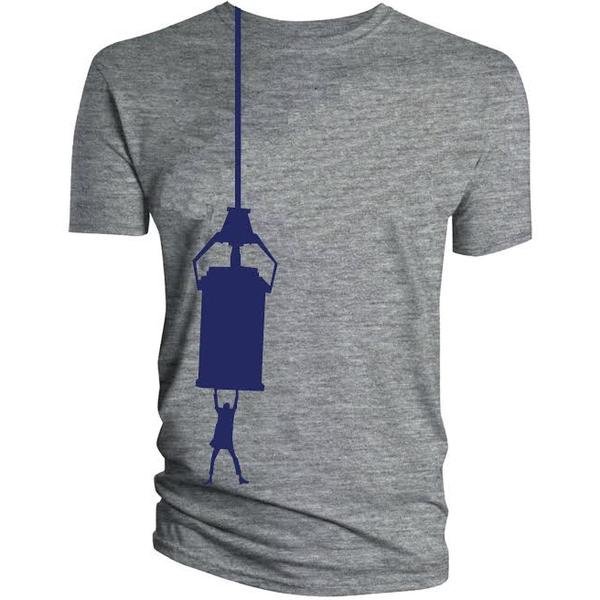 We’re always on the lookout for awesome t-shirts – and if you see a Fairly Odd Parents one anywhere, leave extensive details in the comments section – but far too many these days rely on that well-worn “Keep Calm and Carry On” trope, hilariously replacing “Carry On” with “Regenerate” or “Exterminate” or some other similarly-hilarious example of hilarity. Fortunately, if you pull these aside, right at the back, with what you might incorrectly consider flotsam, you can find a few gems. Like this one.
One of the most iconic images from the 50th anniversary of Doctor Who was undoubtedly the Eleventh Doctor hanging from the TARDIS, being flown by UNIT over London. Stunning cinematography – and captured beautifully in this simple but stunning t-shirt.
We especially like that it’s off-centre, giving the shirt (bizarrely) a sense of movement. Without opting for a shirt reading “STRANGER DANGER”, this is one of the only tops that subtly informs people that you don’t like being picked up. 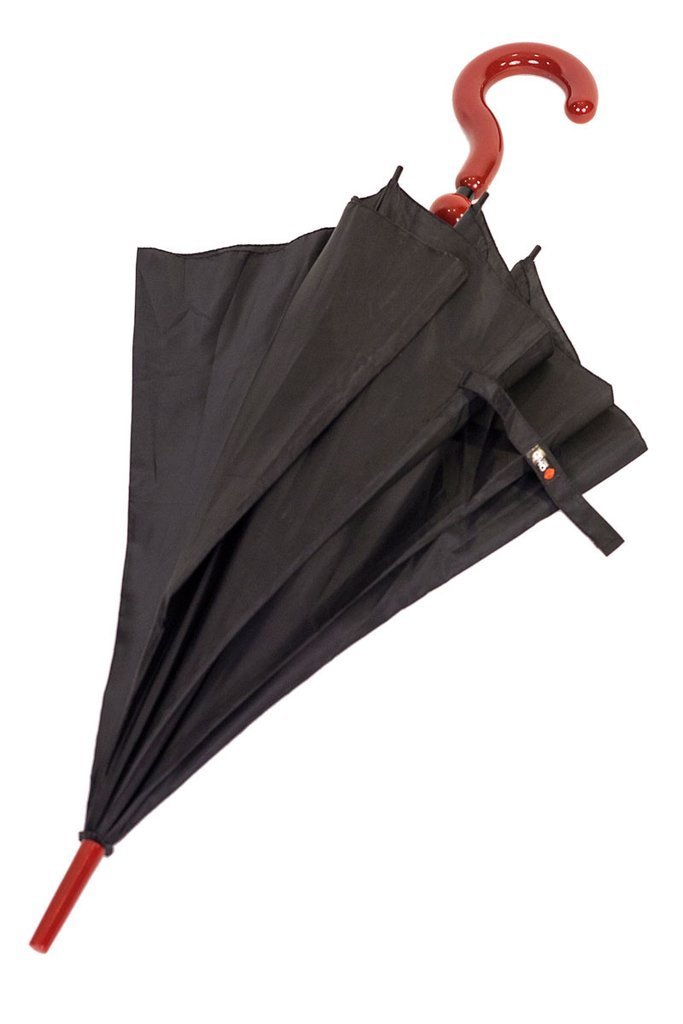 Get rrrrrready to rrrrrroll yourrr r’s.
When we at the Doctor Who Festival last year, it was great to see the amount of cosplayers pretending to be Sylvester McCoy. No, they weren’t quietly scheming to trick an enemy and blow up a planet (to our knowledge); they were wearing Lovarzi’s Seventh Doctor Jumper, Hanky, and Scarf, and boasting about being an extra in The Hobbit. There was just one thing most of them were missing…
This question mark umbrella is a screen-accurate replica of the one used by Messr McCoy back in the late 1980s, produced by AbbyShot. It’s a remarkably understated design (considering this was introduced when John Nathan-Turner was producer, and the Doctor was wearing a sweater made of question marks), meaning it’s ideal for cosplayers and fans who don’t, uhm, cosplay, whether they’re on a convention circuit or sheltering from the rain. And it’s pretty cheap, considering it’s a lovely stick umbrella. Socks. Everyone gets socks at Christmas. And we pooh-pooh them. But socks are important. No, shut up, they are. Without them, our feet would merely be entombed in dead-cow shoes or trainers made of… I dunno, sports presenters? There are some corners of the universe which have bred the most terrible things – things that act against everything we believe in. They must be fought. And these things are monsters that wear trainers and shoes – with no flippin’ socks! Oh geez, help me, Doctor. Help us all.
Fight the 8th worst thing in the universe (just ahead of black holes, but miles behind Kanye West) with these officially-licensed TARDIS socks.
They’re less showy than a question-mark jumper, but a step up from question-mark pants. 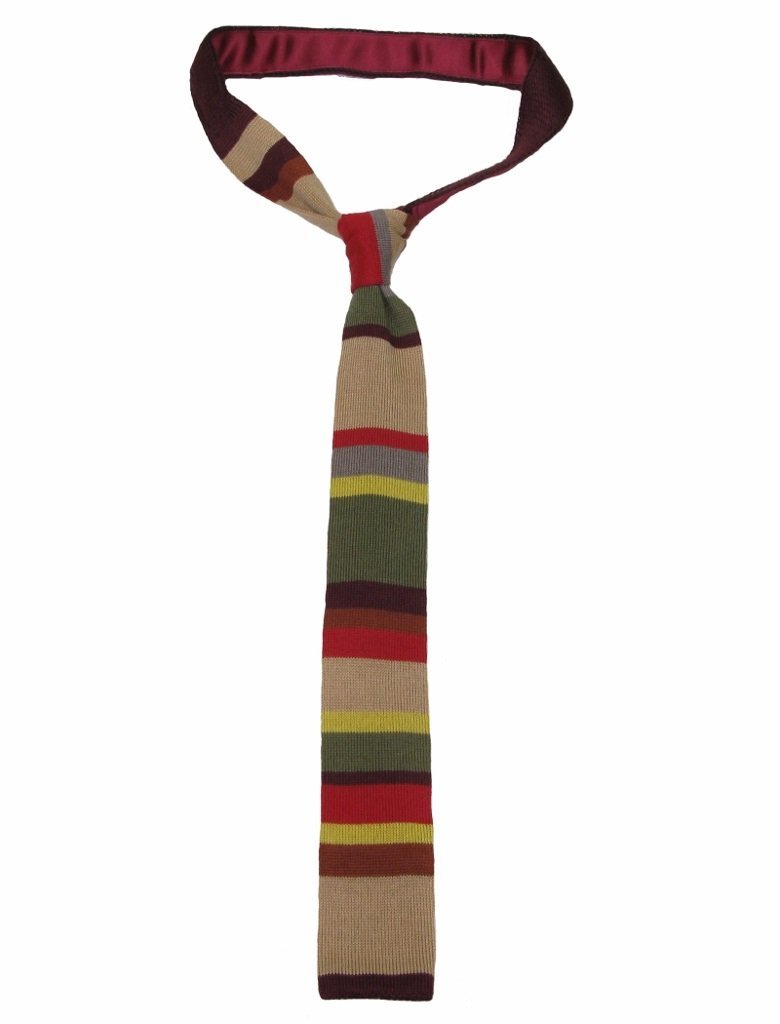 Offices are boring. They’re just stress, paperwork, computer screens, wooden desks, clinical suppression of self-expression, and water coolers. Sometimes, someone brings a photo of their new baby in, or indeed brings a whole proper real-life new baby in, and that’s a moment of joy in an otherwise dull expanse of time-wasting.
Fortunately, there’s another way to spice up the office without turning up in something from Victoria’s Secret.
Lovarzi’s first release, the Fourth Doctor Scarf back in 2012, proved an immediate bestseller: Tom Baker enthusiasts are pretty obsessional – in a good way! Put down that chair! – so further rafts of Fourth Doctor items swept onto the market. This Knitted Tie is an ingenious way of making office-life more interesting, while looking smart. And it’ll definitely win over a workplace-crush. Seriously! I met a girl once, and she seemed most impressed by pretty colours. Actually, she might’ve been a cat. The memory tricks…

So that’s it. Well, it’s not. There’s a wealth of Doctor Who clothing on the market, waiting for you to snap it up, but that’s it for our brief selection of festive present ideas. What else have you got your eye on? Personally, I’m keeping my fingers crossed for a t-shirt that reads “Keep Calm and Regenerate”.