Douglas Adams and Doctor Who: A Perfect Fit?

A few years ago, I was talking to a friend who loves Douglas Adams, but doesn’t like Doctor Who. I know. I didn’t know these sort of people existed either before then. Nonetheless, he said he’d probably watch The Pirate Planet and City of Death because Adams, in his words, “gets it.” We both agreed on this statement – a seemingly-ambiguous one, but a shared acknowledgement of exactly what “it” is.
What did Adams get? Casting your eye over his whole library of work, you might suggest an understanding of balancing humour and drama; or how humanity could fit into a wider community; or how random events slot into the grand scheme of things. In truth, it’s all of these things and more.
But this left me wondering: did Adams “get” Doctor Who? Was he a perfect fit for the show, or is his legacy viewed so positively due to his relatively-low output?
Let’s put that into context. Despite writing a third, unaired story for the show (Shada, partly shot but left unfinished due to industrial action), Adams’ on-screen writing credits are confined to The Pirate Planet and City of Death, while he further worked as Script Editor on Season 17. City of Death is near-universally praised, and rightly so. It’s utterly nuts, very funny, and throws lots of glorious ideas into the mix. The show was afforded location filming in France, so the Fourth Doctor and Romana spend much of their time visiting the sites and running around random streets. The soundtrack is suitably whimsical and distinctly Parisian. Though figures were skewed by a strike at ITV, the serial still scored an average of 14.5 million viewers, with Part Four attracting over 16 million. Frankly, it’s unlike any other Doctor Who story.
It’s often overlooked, but The Pirate Planet is just as brilliant. It’s another very different beast, but it’s just as funny, just as mental, and throws in a TARDIS-load of excellent notions. It also stars Mary Tamm, which makes it at least 28% better than many stories.
But Season 17 – which Adams was in charge of, alongside Producer, Graham Williams – isn’t highly regarded, in general.
The run of storylines is: Destiny of the Daleks, City of Death, The Creature from the Pit, Nightmare of Eden, and The Horns of Nimon (with Shada at its conclusion). In the Doctor Who Magazine 2013 poll, out of 241 serials, these respectively came in at 154, 5, 211, 190, 223. (Therefore, Adams’ writing effort is typically considered its highlight, with The Horns of Nimon its low point.) It might seem unfair to use these scores, but it’s still interesting to note the average is 156.6. Without City of Death, it would be 194.5. That doesn’t sit very easily, considering Adams’ name was attached to all these pieces, and it’s similarly not right to solely criticise Graham Williams either.
Why does Season 17 poll so low? It’s difficult to pin the real reason down, yet you can’t help but correlate its relative “failures” with the successes of the early Tom Baker years – namely, when Philip Hinchcliffe and Robert Holmes were in charge, but equally when Williams was working with Holmes and Anthony Read. The obvious difference in these periods, then, is how dark stories were willing (or “allowed”, if you will) to go. 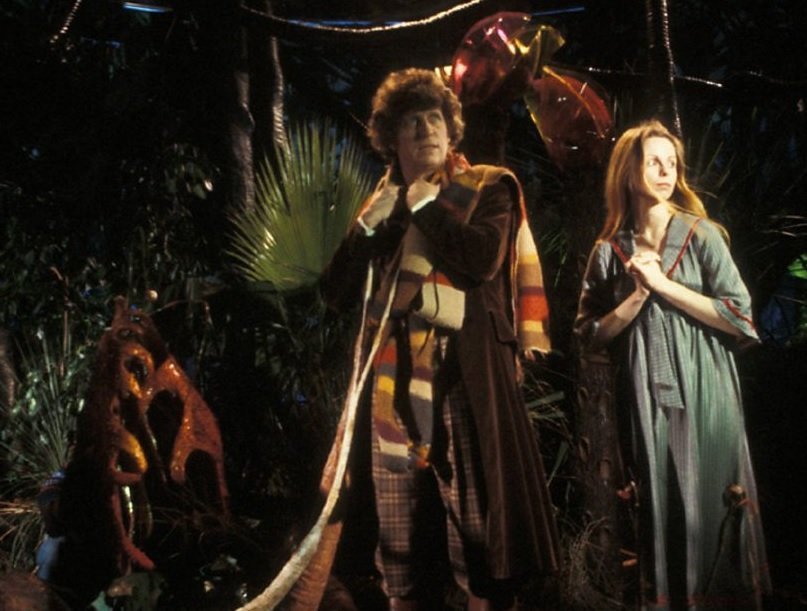 Compare The Creature from the Pit to Image of the Fendahl, Destiny of the Daleks to Horror of Fang Rock, and The Horns of Nimon to The Robots of Death. In each case, the latter stories, from Seasons 14 and 15, indulge in horror elements whereas their Season 17 counterparts largely do not. Doctor Who fans generally like the series to be darker – perhaps because that’s what science fiction naturally lends itself to, or maybe because dark is considered more adult.
Now, this isn’t entirely Adams’ and Williams’ fault. We can quite fairly blame pressure from Mary Whitehouse’s National Viewers and Listeners Association, who disapproved of perceived strangulation, drowning, and Terror By Terry (Nation). Indeed, Graham was apparently told by superiors to lighten the tone of the programme.
Then again, take another look at Douglas’ other works: The Hitchhiker’s Guide to the Galaxy, Dirk Gently’s Holistic Detective Agency, and Monty Python’s Flying Circus will tell you that he was more interested in existential scares than typical horror traits; Last Chance to See that environmental issues take precedence; and The Meaning of Liff… well, I’m sure we could write several essays about that and its sequels, but go wholly off-point.
The point is: Douglas Adams wasn’t big on horror. That means his era as Script Editor isn’t held in the same esteem as other, grimmer tenures. But that doesn’t mean he’s not a perfect fit for Doctor Who… does it?
To properly assess what makes a perfect fit, we first have to consider what makes an ideal Doctor Who serial. Taking a look at that DWM 2013 poll again, the Top 10 features a number of dark stories, either through and through horror – as in Blink, Genesis of the Daleks, The Caves of Androzani, The Talons of Weng-Chiang, The Empty Child/ The Doctor Dances, and Pyramids of Mars – or in theme: The Day of the Doctor, Human Nature/ The Family of Blood, and Remembrance of the Daleks all notably contemplate war. City of Death is arguably the only Top 10 inclusion that’s a lighter affair. 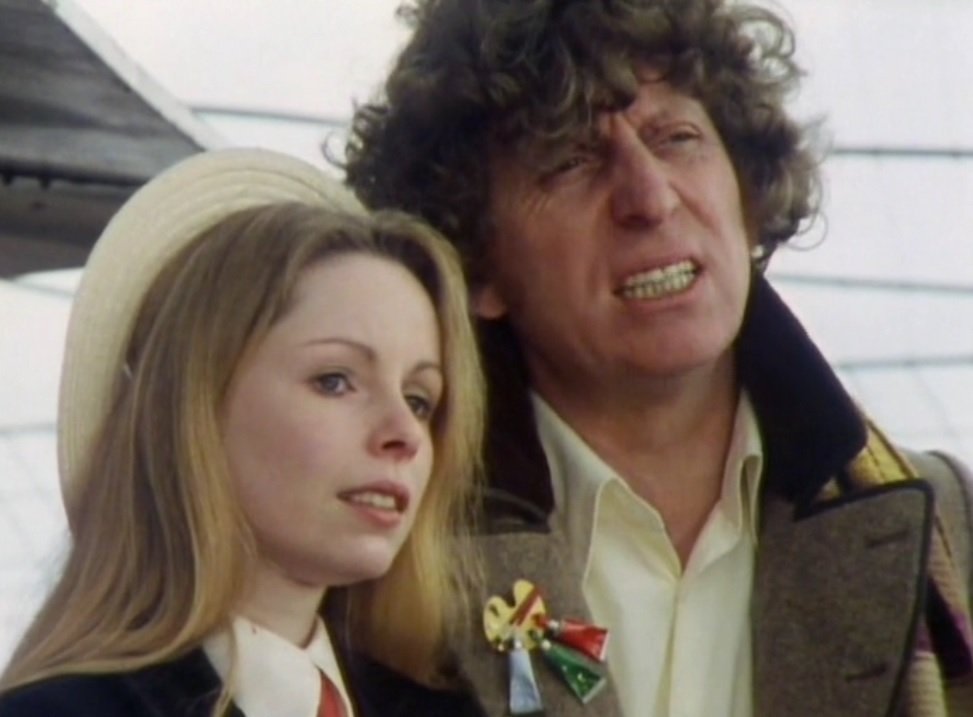 But that’s not fair either. Everyone’s Top 10s will differ. For some people, their favourites will be more frivolous ditties – The Romans, The Unicorn and the Wasp, and The Lodger, for instance. Some find solace in Love & Monsters too… This is evident in City of Death‘s standing. In that DWM poll, levity can be seen in The Five Doctors (#25), The Eleventh Hour (#17), and The Christmas Invasion (#57), although these episodes’ historical importance obviously add to their results.
Taking a look across Doctor Who‘s history, what you find is an abundance of very different styles, catering for an increasingly wide audience. An Unearthly Child, The Rings of Akhaten, Logopolis, Midnight, Vengeance on Varos, The Crimson Horror, Mummy on the Orient Express, The Sensorites, Ghost Light, Voyage of the Damned, The War Games, Kinda: it’s evident just from this tiny sample that Doctor Who consumes ideas like no other.
We could conclude that a perfect fit for the show would be someone with a vast amount of ideas. And Douglas Adams certainly had that.
Did you know that, while plotting The Pirate Planet, he ruminated on the segments to the Key to Time? Ideas he threw into the mix included Stonehenge, a tin the Doctor keeps his jelly babies in, Phobos, K9’s dog lead, the TARDIS, and the Atlantic Ocean. If that doesn’t demonstrate his idea generations well enough, you need only pick up any of his books. These notions are genius and bewildering, and your reaction will depend on how mad you think Doctor Who should be. How would he have pulled off convincing viewers that the universe the Doctor inhabits is the same as ours while simultaneously that Africa were a segment of the Key…? We’ll never know, and maybe that’s for the best. Adams’ theories might prove too wild or surreal for our admittedly-barmy programme.
Due to its incredible scope, no one is a perfect fit for Doctor Who: it morphs into any shape, with few consistent elements, so there’s no ideal jigsaw pieces to slot together. Even if Hinchcliffe and Holmes had stayed with the show forever, it would be criticised for being stuck in its own rut. There’s no perfect fit, because, paradoxically, everyone could be a perfect fit.
The key, I think, is the nature of that very first argument: Douglas Adams “gets it”. That it’s ambiguous is exactly the point.

Douglas Adams and Doctor Who: A Perfect Fit?