HBO Max to Exclusively Stream Doctor Who in America

HBO Max has bagged the exclusive US streaming rights for all 11 series of “NuWho“, aka Doctor Who, 2005- present. As part of the deal with BBC Studios, they will also stream Series 12, starring Jodie Whittaker’s Thirteenth Doctor, sometime after it airs on BBC1 and BBC America.

The exclusivity doesn’t mean American fans can only see episodes via HBO Max; they’ll still be on standard channels, i.e. BBC America; instead, the deal means you can only stream Doctor Who on the one service. It’s likely you won’t be able to buy or rent episodes on Amazon Prime, for example.

The deal, between the BBC and WarnerMedia, also includes British shows like Luther (by Hide writer, Neil Cross), Ghosts, and The Office. Some of these will still be on other streaming platforms in the USA, but others (including the aforementioned Ghosts) will be exclusive.

It’s believed that no BBC shows have been withdrawn from Netflix USA purely in favour of HBO Max, though some will naturally disappear from the industry giant. Over 700 episodes of various British programmes will be on HBO Max.

“Doctor Whois one of television’s all-time, most beloved series on both sides of the pond, and we are happy to be the exclusive streaming stewards for this BBC gem. Another series to further define the high-quality content experience consumers can expect from HBO Max.”

HBO Max launches in Spring 2020, and Doctor Who will play an important part in its initial line-up.

HBO Max to Exclusively Stream Doctor Who in America 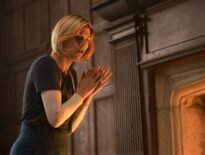 News Rumours: Chris Chibnall and Jodie Whittaker Leavin…
News Enjoy The End of Time at the 10th Anniversary Cine…
0
%d bloggers like this: