Doctor Who Series 5: In Hindsight – Part One It’s been 10 years since Series 5 debuted, and the Eleventh Doctor exploded onto the scene. But how does it stand up with a decade of hindsight? I was keen to go back and explore why I enjoyed Steven Moffat’s first series as showrunner…

I can just imagine Steven Moffat bursting at the seams. He had the new kid ready to go (albeit thinking he was 10 years older originally), and he was finally in the big chair. This was the job he’d wanted all his life and he did not disappoint.

And Matt Smith was very good as well. He came across as very tactile, in his speech while eating the fish fingers and custard. “Amelia Pond – like an name in a fairytale.” But also, he was all fingers while examining the crack in the wall. The former is a very lovely scene that gives great insight into this person but make no mistake, it is the Doctor. He may just be sitting there eating custard, but he’s already settling in.

I like adult Amy when I first see her but then again, how could I not, with that outfit on? Moffat constructs all the pieces of this opening story very nicely, properly introducing us to the Doctor (still baking), Amy (petulant brat with issues), and Rory (doormat). The whole Prisoner Zero/ Atraxi narrative is wonderfully laid out to test this new Doctor, who’s really disadvantaged here, coming straight out of regeneration and still without proper clothes, a settled TARDIS, or a working sonic screwdriver. I think the Moff wanted to show just how good “his” Doctor was, and he pulled it off, too. I thought the “shutter-stop-observation” technique in the park was an interesting touch as well.

The moment that, of course, cements the Eleventh Doctor as the genuine article is him on the roof top confronting the Atraxi, where everything comes together beautifully.

Why I like this episode: for the first — of several times this season, Moffat wastes no time giving new era Who fans (along with the Atraxi) a crash course in just who exactly the Doctor is. That liquid info screen is played to perfection, showing Earth’s history, the threats it’s faced, and finally, each of the faces of the man who stopped them.

Every new era Doctor had their proper introduction moment, when they were fully cognisant and back in the saddle as it were. Eccleston said “Run”. With Tennant, it was him, fully recovered, opening the doors of the TARDIS saying “Did you miss me?” And here, we have each and every Doctor appearing, and he steps through on cue with the bow tie.

It really doesn’t get much better than that. And, of the many wonderful themes and musical pieces Murray Gold has produced for the show since it came back, the theme for the Eleventh Doctor might be his greatest achievement.

Series 5 was off to an excellent start.

Moffat does like to throw The Choice out there, doesn’t he? Where a representative of humanity has to choose between destroying a giant creature or putting humanity at risk. We saw it later in Kill the Moon (Series 8) and Thin Ice (Series 10) with Capaldi, but this was the first time he pulled this maneuver. In each case, though, it does make one appreciate both sides of the debates that are in play.

It seems like this story swam under the radar a bit. Not loved, not hated, probably because the extreme quality levels of the stories immediately before and after it. The Smilers, the queen, the sewage dump, the glasses of water: all weird touches, yet there’s never a lot of chatter about this one, it seems.

I confess that as I revisit these stories from Series 5, I can’t help but contrast and compare how Moffat has Smith do things as opposed to how Chibnall puts Whittaker into action. Case in point: the Doctor explains how he never interferes (and the viewer naturally raises an eyebrow, maybe smiles slightly, as that’s the effect from the performance), yet Amy turns her head and sees a crying child, and trumps all that. Conversely, in The Witchfinders, the Doctor gives the lecture to the pets and simply runs over and gets involved. Same end result but somehow, under Chib’s guidance, the predictable nature of the set up and the ham-fisted execution encourages eye rolls.

The ending with Smith and Gillan looking out at the stars is very reminiscent of Eccleston and Piper in The End of the World. Bottom line: The Beast Below is not one of the stronger entries in the series but a worthwhile one, I think. But what I did especially like was the overall concept. This was the first episode in which he employed his new sonic, which is my favorite design of the entire new Who era so far. The extend-o claw and how he’d check it, take the readings, etc., are all really nicely done. The sonic used by the Ninth and Tenth Doctors was okay but a bit bland. The Twelfth’s was a bit too showy and plastic-looking. The Thirteenth’s is just a muddled mess.

While I’m at it, this is also the first full episode where his new TARDIS is fully baked and presentable. I’ve mentioned this before but the outer shell was a bit too clean, blue, and perfect for my tastes. I like a darker, more battered look, not a shiny toy exterior. The interior was phantasmagorical though! Although I didn’t like the sillier bits on the console itself, the console room itself was a study in Willy Wonka wonder and I applaud it as one of the very best.

Victory of the Daleks

Why do I like this story? I don’t, but I did enjoy the graphic poster they put out for it. Wonderful poster and very dynamic.

As to the story itself… looking at the positives, as the dog of the season, I felt it was actually better and far more intelligent than the dog of Series 6, The Curse of the Black Spot. Compared to that inane piece of frivolous driftwood, Victory wasn’t that bad.

Sure, Amy was incredibly disrespectful to Churchill, and basically acted like an annoying, churlish teenager. The redesigned Daleks were one of the few black marks on the Moff’s record and so soon into his run! That was a shame. The Doctor running in and plastering the professor was unnecessary and a bit ludicrous. Parts of the basic plot seemed to be lifted from The Power of the Daleks and even the regular interaction between characters seemed unnatural and weak. The Doctor wasn’t quite the Doctor… Wait, this episode would have fitted right in with Series 11!

It’s written by Mark Gatiss but maybe Moffat didn’t stick his hand in to smooth things out and polish them up. Pure supposition there. Maybe Gatiss got busy and Chibnall stopped by? But yes, all in all, the one dog out of an overall wonderful season.

Did I mention the lovely poster?

The Time of Angels/ Flesh and Stone

This was the very first adventure Matt Smith and Karen Gillan filmed as the Doctor and Amy and that was well played. Bringing in River is usually an overpowering experience but a good way to get the new Doctor into the swing of things.

And River is really the co-lead in this one anyway, with quite a spectacular entrance. Moffat was firing on all his time travel trope cylinders here, as he would at the end of the series. To think that River has the confidence to blow herself out an airlock, knowing she left a note, in a fossil, to be picked up by the Doctor one day, because she knows his hobby is checking out fossils and artifacts just to see what they get wrong, and that he would see it, note the Gallifreyan message, and come a runnin’ to the exact second she needs him to… And she does that kind of thing often. Wotta woman. (When she’s not stealing his TARDIS, unbeknownst to him.)

The military clergy is an interesting concept Moffat ran through his era too, that started here. I think the Weeping Angels, as a whole, could do with a rest these days, unless someone comes up with a brilliant new use for them but they’re used quite effectively here.

Gillan does a nice job in this one too. She works better when she’s vulnerable, as opposed to snarky. I get that it’s maybe supposed to be a Scottish thing but anyway. The interlude with the other future Doctor holding her hands — which I never realised initially — was a warm touch. Very nicely done. And this two parter really kick-started the chemistry between the Doctor and River. I think that’s mostly why I like this one.

The Vampires of Venice

As adventures go, this was middle of the road, with an interesting alien take on vampires. But as character development goes, this was Rory’s moment. Getting out-distanced and out-performed by a Time Lord and mostly treated like a eunuch by your devoted fiancée: I feel sorry for Rory. Amy treats him like a doormat and, as we saw in the closing moments of The Time of Angels/ Flesh and Stone, she’s more than ready to make moves on the Doctor. (Rory who?) She doesn’t come off very likable at all. Is this some window into the kind of woman the Moff likes? She’s a bit of tramp here. A bossy tramp. I really question the wisdom of presenting Amy in this light. And where I abhor when Chibnall goes all CBBC in the show, I also don’t want to get too close to Torchwood with this stuff. I would advise Rory to run for the hills but I know that would be useless.

As we’d eventually see, he’d go to any lengths for her.

Anyway, the opening scene with the stag party was hilarious, as was where the shirt ended up throughout the story. The other important scene was Rory confronting the Doctor with the dangerous effect he has on his companions, and he’s right.

Rory, like Mickey, started out as a schlump, but eventually got his just due.

Come back tomorrow, as I examine Amy’s Choice, The Hungry Earth/ Cold Blood, Vincent and the Doctor, The Lodger, and The Pandorica Opens/ The Big Bang, rounding out Series 5.

Doctor Who Series 5: In Hindsight – Part One 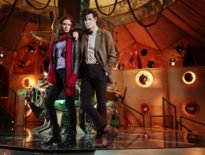 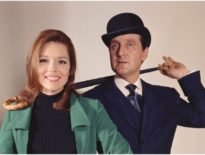