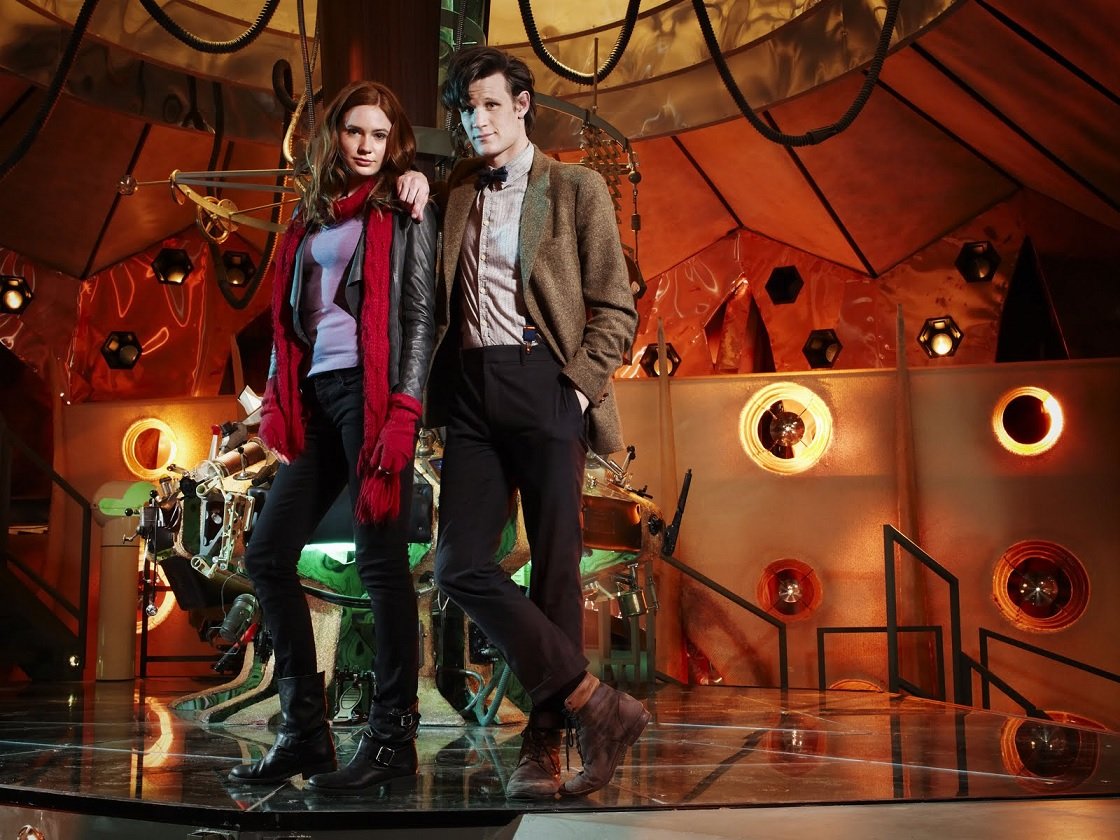 A decade after Doctor Who Series 5 aired on TV, I decided to re-evaluate the run of episodes. Yesterday, I looked at The Eleventh Hour, The Beast Below, Victory of the Daleks, The Time of Angels/ Flesh and Stone, and The Vampires of Venice. Today, I round off the series, from Amy’s Choice to The Big Bang…

This was another classic story. Just so beautifully executed. A very Twilight Zone concept with a fantastic villain and crazy threats. Possessed nonagenarians, the cold star, back and forth from dream to dream. In the midst of it all, which future’s the real one? Does she settle down with ponytail or travel the universe with chinny? This was a delight. Just non-stop nuttiness. And Amy’s as big as a house.

But the two greatest elements here are:

The Dream Lord — a wonderfully worthy adversary which I would have loved to see again. Loads of possibilities in the dream world.

And Amy finally wakes up regarding Rory. About time. Mind you, it takes the first of his many deaths to actually make her realise what he means to her, but baby steps…

This one has become a real eye opener in hindsight, regarding Chris Chibnall’s abilities as a writer.

I thought this was a good story. The basic premise was once again taken from a Pertwee story, so that’s Chibs but I’m forced to conclude that everything that worked well, worked well because Moffat was rewriting a lot.

It’s good to see the Silurians again, even with their fairly radical redesign, but at the same time, they can claim to be a different faction, thus allowing the different look. This was a good examination of the human condition and how far one would go when their loved ones were at risk. Never leave the aggrieved mother and the sadistic chained warrior in the room alone.

I think what I like most about this story and the main conflict is the common sense attitude that manages to break through the proceedings. So often, things get blown up and destroyed, forever scuppering the chance to even sit down and talk. Here, they get that chance and they take advantage of it! They actually come up with a good plan. Silurians take the deserts; humans keep their already-inhabited areas; they work together and the Silurians “buy” their way back with medicine and technology. In reality, sadly, we saw first-hand how factions of each race would be a problem accepting cohabitation and it would really be an uphill battle to actually make it work. Not impossible but extremely difficult. It would take a helluva salesman to get the deal done. Of course, everything gets dumped on the back burner for 1,000 years, so no big decisions have to be made. But I applaud the effort the story makes and hey, if that was all Chibs, kudos to him. Well done. My follow up question would be, what happened to you? But that’s neither here nor there.

The only annoying point was Amy once again being the moody kid with her head down during negotiations. Maybe get another adult to back up Nasreen.

Another positive was this being a two-parter that was pretty well paced.

There are times, though, when I wonder what might have happened if they made the gutsy move and actually followed through with having the Eocene surface and try to cohabit. Lots of story possibilities there. Plenty for a whole series at least. Just a thought.

Rory Death Log: This would hitch the number up to two.

Vincent and the Doctor

Let me get this out of the way — if you harshly criticised or mocked the visual nature of the Krafaysis, you’re being ridiculously unfair, narrow minded, illogical, and a tiny bit cruel. Of all the different sized and shaped life forms stretching across the universe, they’re not all going to look “kewl” and awesome as the Predator and the Alien. Some are going to look like E.T. and some are going to look like the Krafaysis. I think it’s beneath anyone to essentially racially profile a blind, scared, alien beast just because they don’t adore the particular design. The creature was exactly what it needed to be for the episode.

And what a brilliant episode it was. Funny, sad, heart rending, exciting, informative, compassionate, and beautiful. Whenever I see Tony Curran in anything else, he is still first and foremost Vincent to me. I don’t know how large his body of work is but, although he always does a great job when I do see him, I still think Vincent is his greatest acting achievement so far.

I knew almost nothing about the actual man himself (except the ear thing), but I was mostly unaware of his many works. Yes, I know I’m supposed to be an artist but I’m more of an illustrator who’s not that involved with or knowing of art history. That would be more my wife and daughter’s bailiwick. So this episode was a real eye opener for me and I relished the learning experience. This was an excellent example of how to educate and inform, but woven smoothly within the greater, more entertaining story.

Dealing with poor Vincent’s condition, how the Doctor dealt with Vincent, the way it was handled on every level was worthy of a standing ovation, but tears will have to suffice. Seeing how unappreciated the man and his art was during his sad and turbulent life, while frustrating and disappointing, served as a remarkable set up for the last act. The floodgates opened during the speech of admiration and vindication that Bill Nighy gave while Vincent was in earshot. Tremendous.

With everything going on in this episode and the focus on Vincent, it would be easy to overlook Matt Smith’s stellar performance here. Some stories are weaker and needs the lead to carry the proceedings. This was a prime example of Smith having the freedom to just add to the pile of good things.

I can only prattle on about why I love it.

This was one of my favourites of the series, primarily due to its off beat nature, but also because of the further insights to this Doctor’s eccentricities. He may be an alien, but he does his level best to fit in, usually to hilarious results.

His constant interference in Craig and Sophie’s fragile and hesitant relationship is charming, awkward, and funny.

The episode’s threat is really more of an afterthought to serve the greater character development here and that’s spot on as well. Because it’s all the Doctor. The Doctor succeeding brilliantly at the most unlikely things, like football and office sales, while failing miserably as a romance coach. This is also an Amy-lite episode: I’ll be honest, I didn’t really miss her; that’s how good the Doctor was on his own and with Craig.

And can someone please tell me why no one ever talks about The Picture? You know the one I mean. The one out in the hallway of Craig’s place. The bizarre picture of the green faced man that looks like a cross between Richard E. Grant and a Dr. Seuss character? No one ever mentions it…

The Pandorica Opens/ The Big Bang

I wonder if there was a precise moment in Steven Moffat’s life when he decided that, if he was ever in charge of Doctor Who, he’d make his Doctor the best, longest-living, most powerful Time Lord EVER! This could have been when he was 7 or 47.

Was Matt Smith “the best”? Depends on who you talk to but he was popular, and well liked. Longest living? Oh yes, until that point: with his first 10 + incarnations accumulating only a little over 900 years total, Moffat made sure the Eleventh Doctor alone lived over 1,000 years. Most powerful? Well, in the two part Series 5 finale, ALL of his enemies assemble and unite in their fear and hatred of the Doctor and lock him in a box. That alone would mark him as pretty powerful but just to make sure, Moffat ends the universe and has the Doctor recreate it. In essence, Moffat’s Doctor is pretty much top dog, and he presided over the 50th anniversary.

But this two-parter truly is bonkers. Multiple Amys, the fez premieres, Stonehenge, where the demons run — hey! — River’s back, stone Daleks, Rory’s a 2,000 year old Auton and decks the Doctor, “Hello Sweetie” at the dawn of the universe, Cleopatra, cameos a plenty, monsters a plenty, a speech on a rock, Amy’s dead, there’s a wedding, the Doctor is wished back into existence, Amy’s parents blink into existence and are never seen again, the Doctor dances (kinda), and, reminiscent of Rose, there’s some really horrible photoshop work done in a book about Romans.

But to be honest, the notion of the Pandorica containing particles of the old universe and by it blowing up, it covers the entirety of space-time, and thus… reboots it? Retroactively?

That’s kinda rubbish, even within the established wonky world of Who but hey, don’t get too close with the microscope — you might obscure the fun! And it was indeed fun.

I’ve long said that, with the Tenth, Eleventh, and Twelfth Doctor, their first seasons were their best, as they and the writers were all exploring and learning about this character. I think I like that early time, before they get too set in their ways, are more exposed, more experimental. I think that particularly holds true for the season of the Crack in Time. 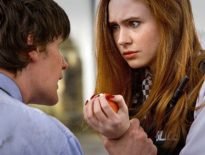 Features Thoughts on The Eleventh Hour: Then and Now 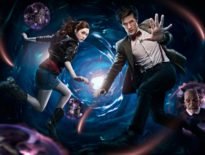