Reviewed: The Essential Terrance Dicks – Doctor Who and the Abominable Snowmen (Target) “And when all the programs on all the channels actually were made by actors with cleft-palettes, speaking lines by dyslexic writers, filmed by blind cameramen, instead of merely seeming like that.”

— Douglas Adams, The Hitchhiker’s Guide to the Galaxy (Fit the Eleventh)

Doctor Who writer Douglas Adams has rightly been lauded for his comedic brilliance, visionary ideas, and technological prescience. But he doesn’t display much forethought about neurodiversity (and other disabilities) in the above extract. As a dyslexic writer myself, with a 20-year career as a writer and editor, I can confidently claim that technology (and a bit of determination) can overcome any such seeming setbacks. In fact, dyslexia can be a positive boon when it comes to ideas, imagination, and looking at the world in a very different way…

However, as an undiagnosed child in the mid-1980s, I struggled at school. I was pretty good at reading (The Beano, mostly) but I found novels – storybooks – a challenge. But I loved Doctor Who and collected everything associated with the programme. Target books were a favourite, as they were a door into Who’s dim and distant past. And you could pick one up for a pocket-money-friendly 20p from Oxfam.

I used to take half a dozen on family holidays. Just to look at them and wonder. Then one time, my brother (who is a year older than me) – in a fit of boredom – picked up my copy of Doctor Who and the Abominable Snowmen and started to read it. Gosh, I’d never dared to do that. He told me all about the Doctor digging about in a trunk for a holy bell, the Yetis and their control spheres, and the warrior Scot, Jamie. When he abandoned the book, I picked it up. And guess what? I started reading…

This is where you get the familiar story of “Terrance Dicks taught me to read”. His prose is engineered to hook young and tentative readers into adventure stories. It’s so sharp and kinetic, never fussy and verbose. I moved on from The Abominable Snowmen to read Target after Target on that holiday and the holidays yet to come.

I even persuaded my parents to buy me an inflatable dinghy, and I would row out to sea with a Doctor Who book, only coming back to shore for essential refreshments. This was much to the chagrin of my bored brother who would shout from the beach for me to come back and play with him. Not likely; I was in another time, another world…

Doctor Who and the Abominable Snowmen is an expertly crafted book. We only have episode two of the original programme to compare and, while I lament the loss of the other five, I know that six-part black and white Doctor Who stories tend to be a bit flabby. Not Dicks’ version, which is razor-sharp.

Terrance really gets the Second Doctor, a seemingly bumbling middle-aged man that everyone (even his own companions) underrates. They mistake his bluster, only seeing the acute intellect underneath when the Doctor is faced with a world- and potentially universe-threatening emergency. But the Doctor is always grounded and vulnerable, never a super-being, or assuming the god-like status of later Doctors.

But the ‘little man’ still commands authority. When his young companion is in hysterics, her mind controlled by an alien intelligence, this is how Dicks describes his response: “‘No, Victoria!’ There was a whiplash crash of authority in the Doctor’s voice.” It’s this precise and startling prose that fuels the narrative. It’s like Terrance is forging a template for future writers about how Target books should be done. No nonsense, tell the story, fire those young minds, and never allow them to be bored. 165 pages. Done.

I still struggle to read novels, although I had a good run pre-children when life was quieter. Maybe I need another boat. But I never struggle with a Terrance Dicks book.

Doctor Who and the Abominable Snowmen is available to read as part of the anthology title, The Essential Terrance Dicks: Volume One.

Reviewed: The Essential Terrance Dicks – Doctor Who and the Abominable Snowmen (Target) 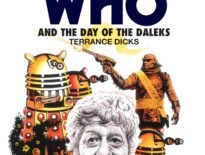 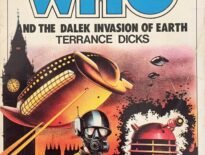