Will Ncuti Gatwa’s Doctor Debut in a Multi-Doctor Episode with David Tennant? What do we know so far about Ncuti Gatwa’s debut as the Doctor? Not a great deal, although bits and pieces of news – and rumours – are filtering down from the set. Neil Patrick Harris (cast as “the greatest enemy the Doctor has ever met”, according to Russell T Davies) has been filming for the 60th anniversary and says he has met Gatwa and got to “interact with him a bit and he’s glorious” as the Doctor.

As we know that Harris has been filming with David Tennant, does this mean that Harris’s character (rumoured to be the Celestial Toymaker) will be appearing in an episode that features both Tennant and Gatwa’s new Doctor? In short, that we are due for a multi-Doctor episode? Does “got to interact with him a bit” mean that Harris has been acting scenes with Gatwa and that Gatwa has started filming the new series?

Time will tell. Neil Patrick Harris also teased that Gatwa will be playing a “sexier” version of the Time Lord and “he’ll be a great Doctor”. Harris further said on the Just for Variety podcast that Gatwa will “be the first gay Doctor, which is going to be super cool”. Gatwa played a gay role as the teenager Eric in Netflix’s Sex Education.

We don’t know if Harris’s comment about “the first gay Doctor” is about characterisation and a new take on the Doctor or is a comment on Gatwa himself. The Doctor of the classic series was essentially an asexual character, with Tom Baker once commenting (in a Whose Doctor Who documentary interview, 1977) that the Doctor “isn’t interested in romance, he doesn’t have those kind of emotions”. All this changed for The TV Movie, which startled some fans when Paul McGann engaged in two rather chaste kisses with new companion, Grace.

The Doctor became a more sexual and romantic character in Russell T Davies’s time as showrunner, with both Eccleston and Tennant’s Doctors in love with companion, Rose. Matt Smith’s Doctor was more uneasy about sexual matters, squirming with embarrassment when Amy tried to engage him in a clinch, although happily flirting with his wife River Song later. Capaldi’s Doctor was a Doctor more in the classic series mould of an asexual character: like Hartnell, he was perhaps too grumpy to have romantic relationships, although his protectiveness of Bill’s memory suggested that he loved her. And Harris’s suggestion that Gatwa will be the first gay Doctor is perhaps wrong anyway, as Jodie Whittaker’s Doctor revealed that she would, if possible, date Yas in Legend of the Sea Devils.

Some fans prefer an asexual Doctor and some are happy with a romantic Doctor who dates humans and snogs Madame du Pompadour.

Commenting on representing black, gay characters in 2020, Gatwa told IndieWire he hoped that “other little black boys around the world” could look up to his roles. “When people talk about diversity and inclusion, sometimes there’s a bit of an eye-rolling mentality or ticking boxes,” he explained. “But I feel like that’s kind of necessary at times, because the playing fields are not level in the first place. Not a quota as such, it’s not as if we had one, but that is kinda necessary, because we need to level the playing field. When we do that, we can show other people’s lives and people’s experiences and show like – ‘See? It’s not that scary!’ It’s important that we show all these things, and sometimes you do need to be like – ‘has this voice been heard? No.’”

Will Ncuti Gatwa’s Doctor Debut in a Multi-Doctor Episode with David Tennant? 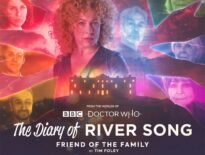 News Coming Soon from Big Finish: The Diary of River So…