So let’s look at the history of the animated episodes and at the Classic range. (We’ll be excluding things like Dreamland and The Infinity Quest; we’re discussing the range of Classic Doctor Who animations, not new releases for the modern era.)

The DVD range which collected every classic adventure since 1999 completed a number of animations for incomplete adventures, the first of these was The Invasion released in 2006. I must have seen this around 2007: I’ve got memories of being in the Earl’s Court experience and picking up a copy of the DVD, signed by the late, great Nicholas Courtney as all the copies of this release were for the exhibition, alongside a number of Target novels; a Revelation of the Daleks photo signed by Nicola Bryant, still hung on my wall; and a copy of Big Finish’s Here There Be Monsters.

I remember knowing that two of the eight episodes were missing and had been specially animated for the release and looking forward to seeing them. I was pleasantly surprised, that the animation held up, and in my opinion, still does. Of course, compared to the animation style today, over 10 years later, The Invasion does look a little… primitive, for want of a better word, but something about the more simplistic style lends itself better to the Sixties story its trying to complete.

Something else that might be argued is that the characters look like the actors they are supposed to be portraying. You can clearly see that it’s Patrick Troughton, Frazer Hines, and Wendy Padbury. If there was one massive thing that I’ve not been a fan of in the recent releases is that the slightly cartoonish style doesn’t lend itself well to looking like the original actors.

Of course, that’s just my opinion; in no way am I trying to be an animator and of course I know that unless we can actually travelled back in time we won’t get a perfect recreation. Nonetheless, I wasn’t a fan of the realisation of people like Anneke Wills and Michael Craze in The Macra Terror and The Faceless Ones. It seems I’m not alone in that, as Wills herself apparently wasn’t fond of her animated form in The Macra Terror.

Another point that I think The Invasion animation has over the newer ones is that it feels very film noir and seems to suit the darker espionage style of storytelling the whole adventure has. It fits the black and white era of Doctor Who a lot more to me.

That’s not to say that the new animations don’t do that as well. Most of the time, you get the chance to watch it in either black-and-white or colour and what is enjoyable is that the animation gives us a chance to see more expansive sets, even if sometimes one wonders if a sea rig would really be that big inside.

Long before these new releases and even the original DVD animations, the only way to experience the original story was either through the soundtracks or telesnaps (or a combination of both). Not including Target novelisations or VHS links because they often embellished action; the Target books, rightly so, expanded on a lot of the stories material, sometimes creating scenes that hadn’t been in the televised adventure.

Take the soundtrack to Fury From The Deep: it’s close and claustrophobic and that rhythmical heartbeat of the Weed Creature permeates throughout the dialogue – sometimes, you don’t even know it’s there. Having heard only the soundtrack before and loving every minute of it, I was eagerly awaiting the DVD release. I was there at the MCM Comic Con announcement and remember the excitement, the rapturous applause; you could have heard a pin drop in the trailer.

Even when the DVD, Blu-ray, and steelbook were released, it was rightly met with praise. But for me, there wasn’t that same sense of claustrophobia I got from the audio and as a result, I found myself not enjoying it as much.

Now, all that sounds like I’m bashing the new animations. But if anything, it’s my love for the source material that proves that you aren’t going to please everyone. For instance, I really liked the animation for The Faceless Ones, as the animation suited the story brilliantly. The airport was rightly expansive and everything worked to compliment the story – even the inclusion of the “Wanted” poster of the Master was a nice little Easter egg that you could only get away with in this style of storytelling.

Following on from The Invasion was 2013’s Reign of Terror, which similarly had two episodes missing. There are plenty of partially-complete or incomplete William Hartnell stories ripe for animation. I remember at the MCM Comic Con panel last year when asked if there were any Hartnell stories in the pipeline, they told us that they would cost more money and they were trying to work out how they would do them… though they did say that The Highlanders would be the hardest story to animate because of all the tartan!

What they seemed to be most concerned about was not getting the likenesses right for the Hartnell era. Enter: The Reign of Terror – not only does that feature Hartnell in his distinctive costume, but also dressed up (agreeing with the Thirteenth Doctor when she held up a hat and said she loved a good plume).

The animation here, by Theta Sigma and Big Finish, captures the likeness of the characters perfectly, so perhaps the current teams should consider working with them for the character sheets and then adapting them to suit their style? As they’ve got the character designs for Ben and Polly, their best bet would surely be to animate The Smugglers. It would be their first taste at a pure historical and give them a feel for the Hartnell era. And as a story where very little of the original televised story still exists, this would be the best Hartnell story to start with.

But this makes it sound like the BBC Classic DVD range were always blessed with amazing animations. I never particularly enjoyed The Ice Warriors; in many ways it was cartoony, despite having an excellent handle on the likenesses of the characters.

Also released in 2013 was The Tenth Planet and of all the episodes to be missing, it’s the final one, with the very first on-screen regeneration! Here, the animation didn’t blow me away but they captured the Cybermen brilliantly and Polly look a lot more like Anneke Wills than she did in the recent The Macra Terror and The Faceless Ones.

Another release that I didn’t particularly enjoy was the 2017 adaptation of Shada. It could be argued that Shada and The Power of the Daleks were testing the waters to see if these releases would be something we fans would want. But something about Shada didn’t appeal to me, and it wasn’t just because I don’t like that story. While I’ll agree that the spaceship scenes were exceptional and they clearly enjoyed designing that, the opening few episodes set in and around Cambridge looked very… childlike. I’ve no other way of describing it. Only having seen this version of the story once, I still remember Chris walking into a kitchen or a laboratory and it looked like something made in Paint.

Putting Shada aside, I think where the DVD range really excelled itself was with The Moonbase. Not only did the animation help make the story one of my personal favourites, but there is evidently something about the Cybermen that lend themselves to animation. In the three Cybermen stories that have currently been animated, all of them have handled the villains brilliantly.

I’ll be interested to see what happens with The Wheel in Space. They’ve already done the first 10 minutes of that story which is included as an extra on The Macra Terror. Sort of.

I was really pleased when it was announced that The Power of the Daleks was being animated and really enjoyed the first animation. The animation team had spotted a quite a few moments they could improve so I’ll have to give the newer version a watch at some point. Still, I was very surprised by how good the first version was.

Animation as a concept is still viewed as very much a children’s thing. So many children’s programmes are animated, even going back to the early days of television. Look at all the Disney films, animated and made for children – or at least a family audience. Despite there being new animations aimed at a more adult market (Spider-Man: Into the Spider-Verse, for example), animation hasn’t made much of a move in the public conscience to appealing towards an adult viewership.

Before he passed away, I remember my Father not being too excited to watch some of the Patrick Troughton stories which had been animated. Mind you, the era he liked was Jon Pertwee and all the cars and machines that UNIT drove. Even in The Invasion, we couldn’t sit through it without him telling me the makes and models of all the cars! But The Invasion had two animated episodes he had to sit through at first, and he did admit in the end that they weren’t as bad as he thought they were going to be.

Perhaps its a generational thing. My Father was born in the very late 1950s so would have grown up with the Disney films and animated children programmes, then going on to watch things like James Bond or The Avengers. There was a definition of television for children and television for grown ups.

Nowadays, that line gets blurred. Again, using Into the Spider-Verse as an example, it appeals to both parents and children, while the recent animated Harley Quinn series was solely aimed at adults. The Simpsons is aimed at all ages while Family Guy and South Park are for adults. So why has the animation for Doctor Who proved quite so divisive among fandom?

My Father had quite strong memories of The Ice Warriors and The Web of Fear from their original broadcast. “I remember the one with the Yeti in the dark tunnels,” he would tell me. How more sad, then, that The Web of Fear would be released on DVD the year he passed away. But perhaps those who remember the stories on their broadcast can’t see the animation capturing the same ‘feel’ as the original outing.

Or maybe it’s because many fans want things to be as authentic as possible and only the discovery of the original tapes, which is very unlikely, will do. But since the early 2000s, Doctor Who has lent itself to animation, from Scream of the Shalka, Dreamland and The Infinite Quest to the recent Thirteenth Doctor story, Can You Hear Me?, which had a few purely animated sequences.

Unless there is a miraculous discovery of every missing story, these animations are as close as we are going to get to having a complete collection of stories. And I know this has probably made me sound like I don’t enjoy the new animations. I can promise you that I do, but there are a few things that need tweaking for me. Nonetheless, there is absolutely nothing wrong with re-imagining something, so long as the essence is the same.

I wonder how my Father would have felt about The Web of Fear now, with five of the six episodes having been put onto DVD; with the recently announced animated episode, details are being kept under wraps. Are they animating the whole story or just the third episode? Would he want to watch it or would he be happy with his memories of the original outing?

I’ll ask him one day…

Features Celebrating Doctor Who Confidential: The 10 Most M… 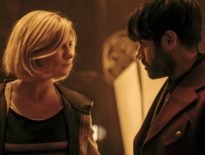