Being a Doctor Who fan in the United States in the 1980s was nothing like the Internet-connected utopia most modern fans ‘over the pond’ know today. To get your hands on any sort of official merchandise back then you either had to be in the know or pay extravagant fees to get items sent from overseas.
However, as a young fan I was blessed to live in Chicago, Illinois an area where there was a large number of Doctor Who fans already in place from the local PBS station, WTTW, showing Doctor Who regularly since the late 1970s, particularly from the Jon Pertwee/Tom Baker eras.
There was an actual entire store on the North Side of the city in those days that was dedicated to just Doctor Who merchandise hard to find Stateside and there were many local fan clubs and groups as well that contributed to the growing popularity of the series in the Chicago area. 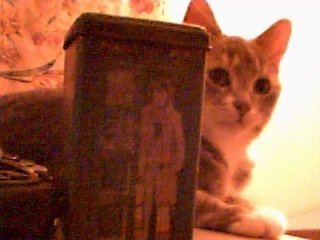 Which brings us to the main subject of this article: a small blue tin Police Box bank with Tom Baker painted on the front.
I have owned this piece of merchandise for over 30 years, it has made two trips to Texas and back from Illinois, and has always been on display in one way or another wherever I have resided. I acquired the bank from one of those aforementioned group of fans, one that gathered at the Chicago Public library branch right across the road from my childhood home.
The night I got it was kind of special too, because besides the obvious ‘fan’ things to do such as debating who had the better head of hair – Jon Pertwee or Tom Baker – there were also certain fans in the group that had 35mm films of Doctor Who episodes that were not available on television in America at that time.
So that fateful night it was rumored to be something very special, because more people were in attendance than I had ever seen before at the small local gathering of Who followers. The episodes were shown right behind the library’s main check out desk in a small room with a portable viewing screen set up at the front and about 50 folding chairs set up facing it. While I was doing what most children do, rushing about trying to experience all of the things around me while missing nothing, people were already taking their seats.
Occasionally someone would bring in a small amount of merchandise to buy, such as a few boxes of jelly babies (which are illegal in the States in large quantity because of the red dye used in the making of the sweets), a couple of Top Trump decks, an official mug, or a few copies of Doctor Who Magazine.
This night it was one of two Police Box banks made in 1980 by BBC Enterprises. One bank had the image of Tom Baker on the front in his classic scarf and the other had the ‘new’ Doctor, Peter Davison on the front, smiling out from the TARDIS’ doors in a very soothing way, probably to ease the difficult transition some might have felt at the time after Tom Baker’s 7-year run had come to a close. Tom Baker was of course my choice as I hardly knew Davison’s Doctor at the time (although I did later learn to appreciate him as his episodes began to make their way to America). At this juncture, the man with the curly brown hair and the impossibly long and iconic scarf was like an old friend.
It is said that the memories we hold most dear and the objects we associate with them are built around the emotional attachments we feel towards those items and times in our lives. The small metal Police Box would forever be attached to a time when life was simpler and the worries of the real world seemed far off and distant in the future, like the feeling you get when you awaken from a very surreal dream that won’t quite leave your mind.
That night I sat in that small dark room in the library, clutching the small blue bank while the latest ‘rarity’ from Doctor Who‘s past played out across the ages in all it’s damaged and scratched 35mm glory.
This one was in black and white and I recall my amazement as I watched two school teachers bumbling around a junkyard on Totter’s Lane… This was the very first episode of Doctor Who and watching it, new found treasure in hand, I felt like I was privileged to be able to view something most American fans at the time could only dream of or read about.
That bank, as said, would be with me for the next 30+ years of my life, but it is the first 30 or so minutes that I owned it that cemented it into my memories. When Dapol started making Doctor Who toys later in the 1980s, I would use the bank as the TARDIS for my Seventh Doctor figure as he battled my Imperial Dalek figure for universal supremacy as those were the only two we could afford; the Dapol line was extremely expensive in America, if you could find them at all.
The bank would travel with me on the journey of life, on a long ride as a teen from the big city of Chicago to the growing city of El Paso out west. Later, it would ride along with me in my backpack in 2012 as I made the journey home after another short stint in Texas via bus.
It has sat in my living spaces on display throughout my life, meaning in one twisted way, Tom Baker has literally seen most of my most private moments (sorry about that, Tom). The bank became one the few things to survive the extremes of life we all go through, becoming as battered and beat up as the fictional object it was made to appear like.
While it may not have travelled as many miles as the real TARDIS and it may not be able to solve the mysteries of time, that old Police Box bank has been a round a bit and that is okay: I think my favourite Doctor would approve.

by Thomas Spychalski time to read: 4 min
Features Which is the Better Spin-Off: Torchwood or The Sar…
Features Our Favourite Merchandise: Character Options'…
0
%d bloggers like this: