Colin Baker’s last season as the Doctor, Trial of a Time Lord, gets a fair bit of slack – in fact, we get it a roasting just yesterday.
And that’s not fair. However much we criticise anything, it’s still Doctor Who and we love it for that.
Join us as we discover the really great things about Trial of a Time Lord… How can you criticise a work by Robert Holmes? Arguably, he’s the person who understood the show more than anyone else, and The Mysterious Planet only pales in comparison to a few of his other serials – notably The Ark in Space, The Talons of Weng-Chiang, and The Caves of Androzani. If it were written by anyone else, it’d be viewed far more favourably because the weight of expectation isn’t there.
But there’s a lot to enjoy. Like, for instance, Colin Baker enjoying a less angst-filled Sixth Doctor, and showing off the Time Lord’s genius. Not to mention that gorgeous sequence where the TARDIS is pulled into the space station – that alone is worth watching The Mysterious Planet!
It also includes a neat narrative trick, similar to one employed by Steven Moffat for The Big Bang: for the latter tale, Matt Smith’s Eleventh Doctor is at times wearing a fez, and sometimes holding a mop and drink. These are physical clues to the order of events; when he grabs the fez and mop, that reminds the audience of the scene set in the past, so you can tell he’s about to jump back. For Trial of the Time Lord, the Sixth Doctor’s outfit changes as a cue to when scenes take place in his timeline.
The Mysterious Planet is deceptively clever. 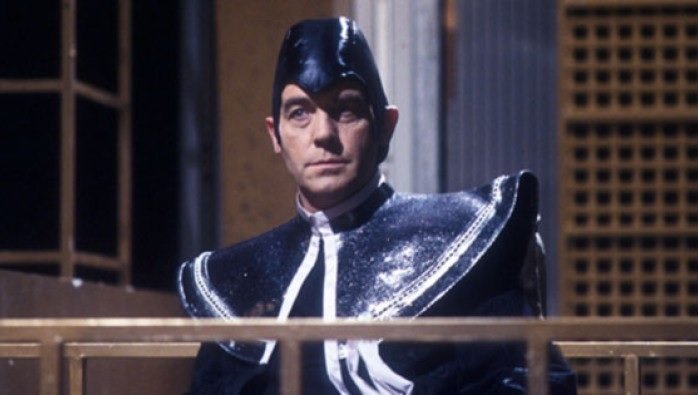 Okay, so he brings up all sorts of uneasy questions, but that’s Doctor Who!
The Valeyard serves to underline the alien nature of the Doctor: we really don’t know what he’s capable of, and when the revelation is made about who the Valeyard is, it makes you question the amount of blood on the Time Lord’s hands. And indeed the Time Lords’ hands, plural. The Doctor is the reflection of his Gallifreyan upbringing, deciding to run from the pressure of it all; what does this make the Valeyard, as a similar reflection of the Doctor…?
Exactly how the Valeyard comes into being is up for debate too. And there aren’t loads of clues. To paraphrase Ian McNiece (or it might’ve been Churchill), the Valeyard is a riddle, wrapped in a mystery, inside an enigma, and as such stands out as one of the most intriguing characters in Doctor Who‘s long history.
Plus, of course, he writes for the DWC, so we can’t complain too much… This second chapter of Trial of a Time Lord gave sweaty, hormone-heavy teenage boys exactly what they wanted: a bald Peri with the mind of a slug. Phwoar.
No? Okay. Still, the meeting where behind-the-scenes bods decided to include a scene with Peri writhing around helplessly on a beach must’ve been quite something. It’s like a knock-off remake of Planet of Fire, except they couldn’t afford Mark Strickson so decided to use Colin instead because he was still on contract.
Sil the Mentor is back and as wonderful as ever – only this time, Kiv is in tow too, played wonderfully by Sontaran-in-training, Christopher Ryan. It’s great to see Sil snivelling and playing up to his best bits from Vengeance on Varos, and Kiv is a solid creation that’s nicely designed and portrayed.
It’s a bold serial, even taking the chance to kill off a major character. For a bit, at least. As ever with experiments, not all of it works, but a great deal does! 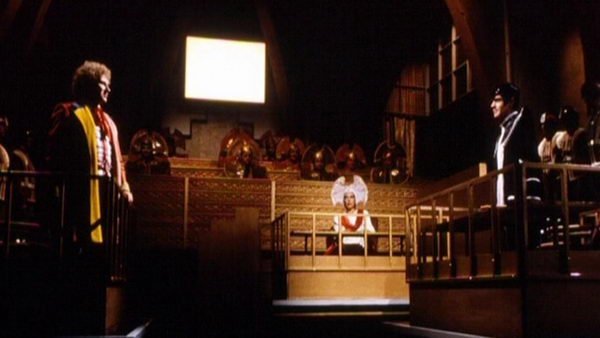 You can say it dragged on too long, but the central premise, and therefore its structure, is an absolute masterstroke.
It draws inspiration from The War Games, of course, considered a high-point for the Second Doctor era; and it’s certainly one of the most memorable periods for the show. Ask people to think of a Sixth Doctor adventure, and, if they don’t plump for The Twin Dilemma, they’ll likely go for Trial of a Time Lord.
The idea was simple but smart: plan a series of stories for the Doctor, plotted in the past, present, and future, which then culminates in a two-part conclusion which sees the Doctor confront not only Gallifreyan society but also himself.
I’d argue no other series could pull this experiment off half as well as Doctor Who does.

Terror of the Vervoids 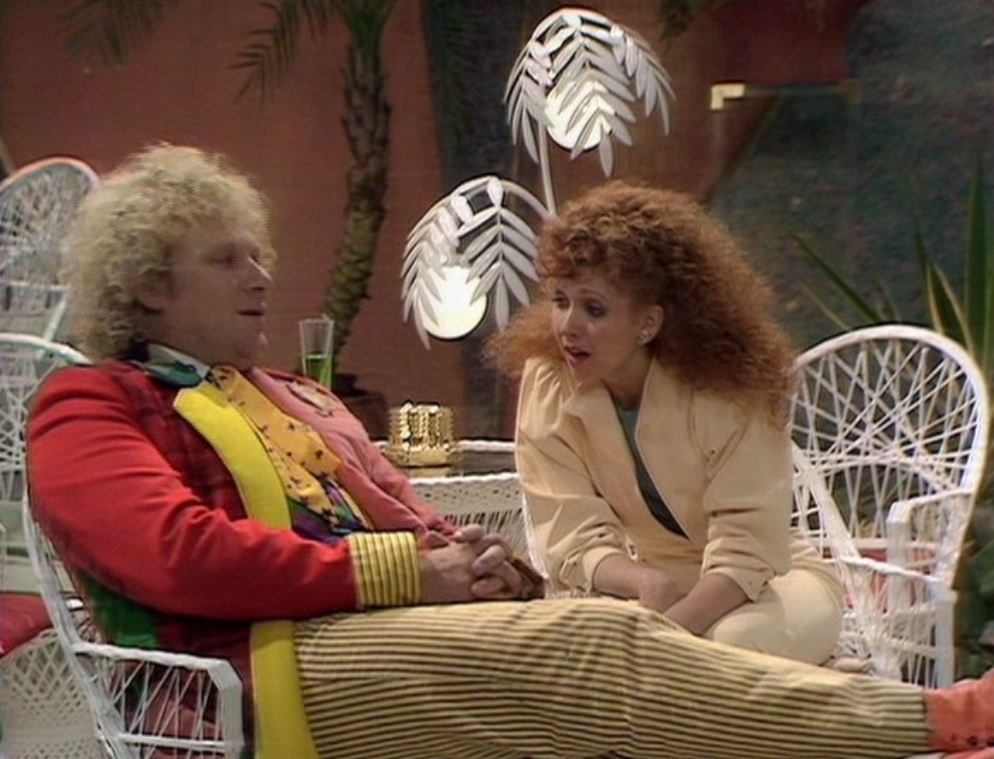 Oh, I love a murder mystery, me. And I’ll tell you something else: I love Terror of the Vervoids too. I’d go so far as to say it’s the best Sixth Doctor serial.
Sure, it’s full of pretentious dialogue, but it all fits doesn’t it? It’s about as subtle as a sledgehammer at times, but there are lovely little nuances – often from Colin Baker, who puts in a great performance, walking the fine line between the serious and the tongue-in-cheek perfectly.
Everything about it is straight from Agatha Christie, which is something that should be applauded. Every passenger on the Hyperion III has secrets; it’s a claustrophobic setting; and the mystery is compelling with well-drawn characters.
Accusations about the Vervoids’ design are ridiculous – because they look fantastic! Yes, even their leafy gloves. The headpiece especially is a canny look, and they make one of the most memorable monsters in the Sixth Doctor’s tenure. 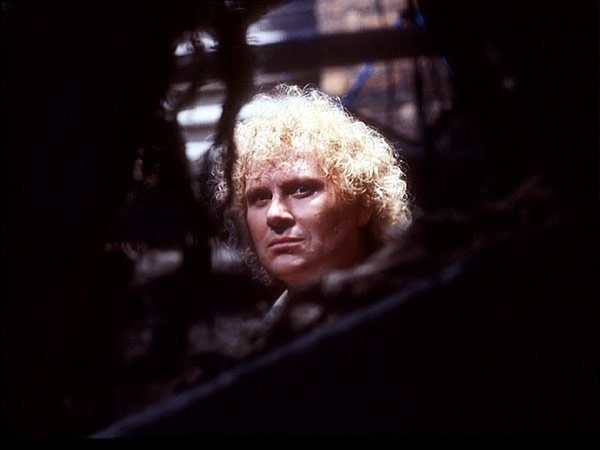 That Trial of the Time Lord is Robert Holmes’ last Doctor Who is a tragedy, and no one can deny that. He was an astonishing talent, and remains very much missed.
Similarly, it’s sad that this is Colin Baker’s last story too.
But always look on the bright side of things. Everything’s got to end sometime, as a wise man once said; otherwise nothing would ever get started. Baker gave way to Sylvester McCoy, and at least we can look back at Colin’s time in the TARDIS and be grateful we had him as the Doctor.
We can also be appreciative of Holmes working on the show, and in such an extensive manner.
Be sad it’s over, but also be glad we had what we did at all.
Plus, of course, Sixie’s dodgy regeneration gave us Spiral Scratch, Time’s Champion, and The Last Adventure. Not bad going at all. How glorious it is to have had Geoffrey Hughes in the show! And not just that: he also sort of kinda a bit played the Doctor!
The Keeping Up Appearances actor is brilliant in the final two-parter that brings the Sixth Doctor’s era to a close, but then again, all the performances are exemplary. The tight cast actually works in favour of The Ultimate Foe, giving us a story that’s really focused on the Doctor being as resourceful and clever as he possibly can be.
It’s a crying shame we didn’t get Michael Jayston’s return as the Valeyard, or Lynda Bellingham as the Inquisitor, but the former here is thoroughly threatening and the latter is a joy, so let’s celebrate that at least.
It might be a shame this is Colin Baker’s last serial, but fortunately, it’s a belter.
What do you make of Trial of a Time Lord? What are its best bits? What are its worst? Let us know below!

by Philip Bates time to read: 5 min
Features Election Special: The Sixth Doctor Vs. The Valeyar…
Features Elegy For A Flat Cap: Peter Sallis Remembered
4
%d bloggers like this: