Big Finish is celebrating 20 years of Doctor Who audio adventures across 2018, 2019, and 2020, each celebrating an incarnation of the Time Lord – and the first two titles have been announced. Later this year, the Seventh Doctor returns for The New Adventures, and then in March 2019, Tom Baker stars in The Comic Strip Adaptations!
Sylvester McCoy’s Doctor returns with two companions from the Virgin Books’ New Adventures of Doctor Who – Yasmin Bannerman (The End of the World) plays Roz Forrester and Travis Oliver (Gridlock) plays Chris Cwej across four stories:

Virgin Books’ New Adventures continued after Doctor Who was cancelled in 1989, and explored darker corners of the Who universe.
Producer and director, Scott Handcock explains:

“As a fan who grew up in the era of the New Adventures novels, I was thrilled when David Richardson offered me the opportunity to tackle a new box set featuring the Seventh Doctor, Roz Forrester, and Chris Cwej. The feedback for the Novel Adaptations was fantastic, and getting the chance to tell completely new stories with this TARDIS team has been a joy!

“We’ve tried to make the most of the box set format, so we have four original hour-long stories reuniting the Doctor, Roz, and Chris – and, of course, Sylvester, Yasmin, and Travis, who struck up such a brilliant rapport on the adaptations. The four new tales tackle very different genres, in very different settings and times, with Chris and Roz creator Andy Lane kicking off the box set with his story, The Trial of a Time Machine. There really is something for everyone!” 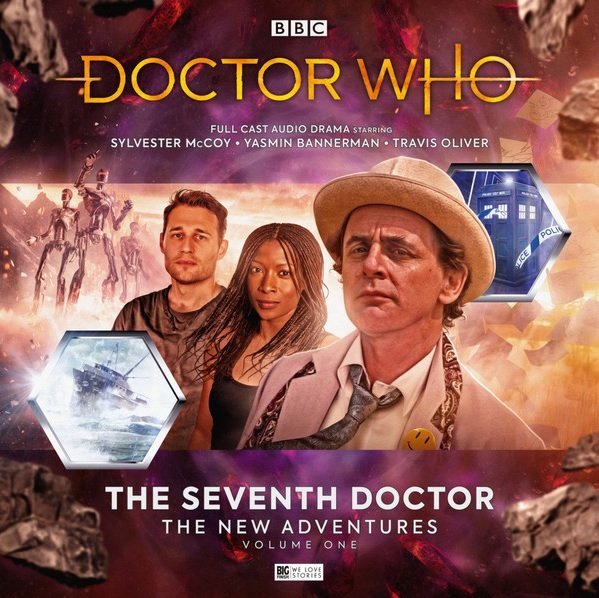 “These Fourth Doctor comic strip adaptations have a whole different feel to them. It’s like they’re from a parallel universe vision of Doctor Who. Tom Baker spotted it straight away, emailing me the moment he’d read The Iron Legion, commenting that this was ‘a bit DIFFERENT’ – actually typing ‘different’ in capitals! But he rose manfully to the challenge and entered into the spirit of it all wonderfully. And that spirit is that they are, essentially, wackier.

“There’s a feeling of ‘we could do anything because there are no budget restrictions’ in the original comic strips, and our adaptor, Alan Barnes, has captured this perfectly. Crazy characters, extravagant action sequences. And Alistair Lock has done a superb job with his sound design and music.

“The Star Beast has a slightly different feel. The alien monster craziness is contrasted sharply with a dash of kitchen sink drama and a touch of Grange Hill, which predated the TV series exploring more domestic settings. It’s interesting how the brilliant comics writer of these strips, Pat Mills, kind of anticipated this. Alan has a great love for Pat’s work, and he was absolutely the right fit to adapt these beautiful, bonkers adventures of an extra-eccentric Fourth Doctor.”

The Fourth Doctor Comic Strip Adaptations  will be released in March 2019 as a 5-disc CD box set for £23 or on download at £20.
Or you can get both sets together as a pre-order bundle, at £45 on CD or £40 on download, exclusively from Big Finish!