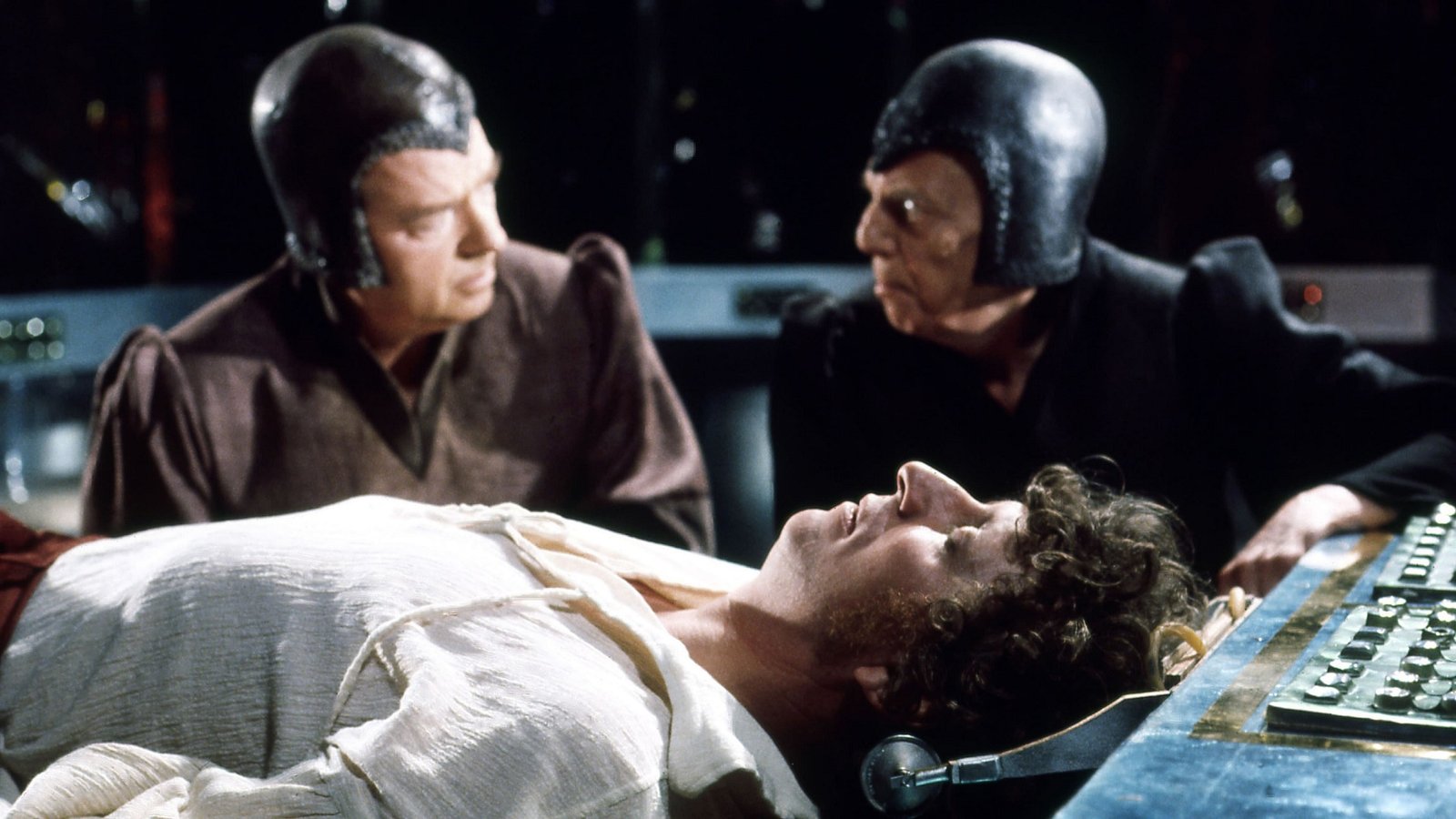 The Time Lords of the planet Gallifrey. High-collared curmudgeons who pledged to do nothing more than observe other, lower races, looking down upon them and mostly wagging their fingers. No one ever dared leave this domed cradle of civilisation until one day when this one troublesome sort had the audacity to do something that no one had ever done. He and his granddaughter stole a TARDIS and ran away! This sole act and his continued rebellious existence is, of course, an embarrassment to all that is good and noble and upright in the history of Gallifrey!

What a bunch of malarkey.

In the early days, we fans used to find it interesting that the Doctor was an outsider, a rebel, a rare square peg that just didn’t fit into the roundels of his home planet. But just a couple years into the series, we find out very quickly that he’s not the only renegade. Not the only one who got sick of living in the giant snow globe. Let the parade begin…

We first meet the Meddling Monk in The Time Meddler and hey, he’s meddling! But William Hartnell’s First Doctor knows him and they’ve got some sort of competitive history together, always one upping each other. They run into each other again during the epic Daleks’ Master Plan as well, where he — spoilers — meddles. I’m actually surprised we didn’t see Peter Butterworth in the role again in the ’60s but the point is, here we found out that the Doctor’s not so unique in his distaste for how the they do things back home.

Although where the Monk was somewhat amusing and seemingly not all bad, we then come to the War Chief (Edward Bradshaw) in Second Doctor Patrick Troughton’s swan song, The War Games. This guy was an arch mess, another Time Lord who might be one of the nastier ex-Gallifreyans. A power-hungry mass murderer on a galactic scale. How did this guy slip customs and manage to quietly exit the dome? Is there no testing at the Time Lord schools? Sure, there’s the occasional accident over at the Schism of the Time Vortex but were there no alarm bells with this guy ever?

By the way, this was where we found out about the Time Lords and how they tend to recognise each other as fellow Time Lords somehow, even if they don’t personally know each other. Somehow they know – except when the story doesn’t necessarily call for recognition but I digress.

Anyway, the War Chief tended to shout every word and he thought out loud a lot, loudly, using loud words expressed in a loud way. And no one back home noticed this? I WILL GET THE MILK FROM THE FRIDGE, MUMMY! But what I think really drove him over the edge was when he got his ranking during the whole War Games scheme. He was only the War “Chief” and subservient to the War “Lord” played by Philip Madoc. If you’re used to being a Time LORD, getting busted down to Chief might sting. Fair’s fair though; Madoc was the much better actor. But the point is, yet another renegade Time Lord was out and about, and this one did a lot more than meddle: he was dangerous. Speaking of dangerous…

A new incarnation for the Doctor, a new additional renegade from the homestead. But this was no ordinary renegade from Gallifrey who also managed to bust loose to wreck havoc over lesser worlds and poor unfortunates (although the list was growing). This one happened to be a close former best friend of Jon Pertwee’s Doctor who fancied calling himself the Master. The Third Doctor even gets a heads up from another messenger Time Lord warning him of the Master’s arrival. The Time Lords do seem to be able to keep track of their wayward sons and daughters. They don’t step in, mind you; they just sit back and enjoy the show.

But the Third Doctor didn’t run into just one more Time Lord on the loose. He also happened to run into his old mentor K’anpo (George Cormack), who, I guess, decided to also leave the dome to retire on Earth. I’m not sure if there’s a daily shuttle departure off planet on the big G or what but if a planet that’s pledged only to observe and do nothing isn’t a decent place for retirement… I don’t where else would be.

But when we get to the Fourth Doctor, open the barn doors. Robert Holmes gave us our first real peek behind the Gallifreyan curtain in The Deadly Assassin. Instead of the god-like beings most would mistake them for if you just experienced the ominous effects of their powers, we saw that they’re mostly overly officious, stuffy bookworms, elitist weasels, or dull guards. But in The Invasion of Time, we also get some insight as to what happens when you’re not an elitist weasel, stuffy bookworm, or dull guard. You get booted outside into the wasteland, so instead of high collars and vibrant robes, you can wear animal skins, shoot arrows, wrestle with wildlife – basically have a little fun.

So when you think about it, if you’re bored with the status quo in the big dome, you’ve got two choices: hit the wastelands and learn archery — quickly — or head out with a TARDIS to screw around anywhere in space and time. So really, these renegades are the ones crafty enough or lucky enough to manage to snatch a TARDIS. But anyway, this did give a little context as to why the vast majority of the Time Lords were pulling a Gallifrexit.

Meanwhile, the Fourth Doctor eventually: A) runs into another old classmate, inventor and schemer, Drax (Barry Jackson); B) is himself a disruptive influence on Romana, who also eventually ditches Gallifrey in lieu of adventure; and C) meets up with Professor Chronitis (Denis Carey), another expatriate from back home. They’re everywhere.

And of course we can’t forget the Rani! Yet another contemporary of the Doctor from school. That must have been a helluva graduating class.

Of course, at some point, the Time War began. The Time Lords went from inactive observers to the most savage and war-like race next to the Daleks, of course.

So, when came NuWho, the whole notion of who snuck off Gallifrey kind of became moot… well, until The Doctor’s Wife, where we heard about the Corsair and his exploits — presumably before the Time War — along with a whole bunch of other free spirits, all of whom met their sad end at the hands of House. The adventures are not all fun and games when you leave the shiny dome.

Was the Doctor really a trail blazing, bold renegade or was he the last one out to turn off the lights?

If I’ve forgotten anyone of the apparent legion of renegades, pensioners, vacationers, and schemers, to leave Gallifrey behind, I do apologise — it’s hard to keep track across all time and space — but ditching the dome really has been all the rage.