Carnival of Monsters: Doctor Who Does Alton Towers Rides 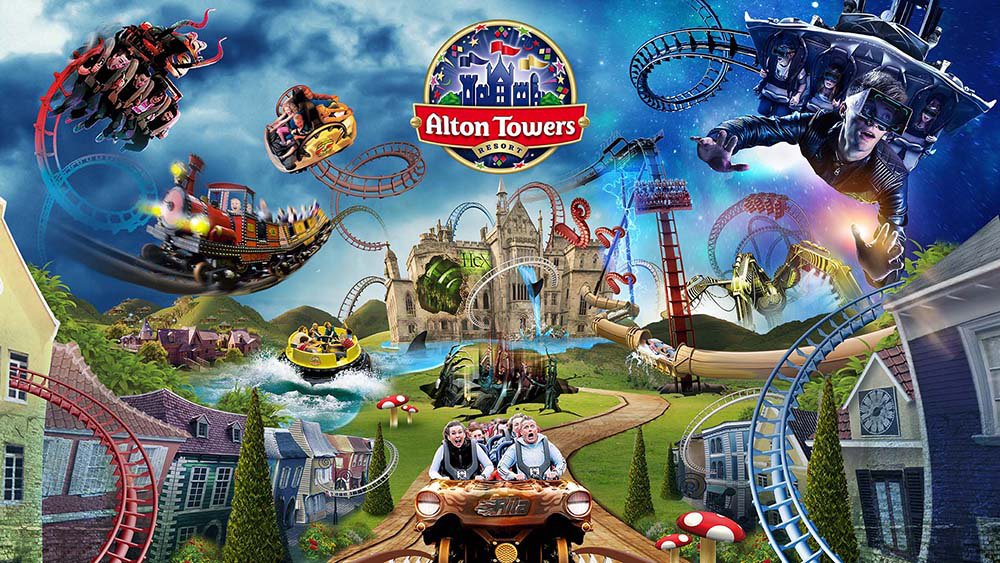 There are many things that my family and I argue about, but one area in which we’re all in general agreement is that Alton Towers is probably the best theme park in the country.

Certainly it’s the best one we’ve visited. This is largely because it was never intended to be a theme park at all. It’s an old estate that was failing to attract the tourists, so they put in a couple of funfair rides and eventually a corkscrew and the whole thing (if you’ll forgive the pun) just sort of spiralled out of control. Or not, as it turns out – because while there’s a monorail and a lot of concrete and at least a dozen coffee stands, the grounds themselves remain largely intact and, for the most part, comparatively unspoiled. And while the roar and grind of a squealing coaster may be heard around every corner, drive out of Alton and you’d scarcely know there was a theme park there at all – a quirk that’s down to contractual promises about noise levels and a planning agreement that states no ride may be built above the tree line. And the gardens are still there, resplendent with enormous yews, craggy rockeries, and a not inconsiderable lake, while the gothic features of the towers themselves cast a shadow in the distance.

Walk around for a while and you can feel the history of it. The shabby rusted metal of the abandoned flume, poking out from the edge of forestry. The Easter eggs that may be viewed only with a glance at precisely the right moment – the blue-and-white hedgehog glimpsed from the cable car; the abandoned toilet block; the plastic duck on top of Rita. The snatches of old songs in the gift shop. Put your phone away, please: no phones on the rides.

The family loves it. We’re old hands at this now, familiar with queuing peaks and shortcuts and we can plan a day to the last detail, providing nothing breaks (spoiler: it does, every visit). On downtime between queuing sessions – or when the others are on a ride that would likely turn my stomach – I’ll linger near exits and signposts, ready to lend a hand to first-time visitors who can’t find their way, and it is inevitable that at moments like this my thoughts will turn towards Doctor Who, a magpie’s gaze drifting across architecture and the movements of crowds. What, I find myself wondering, would the Doctor make of this place? Where would (s)he go? What rides do Time Lords enjoy? Crossovers are thus inevitable: regular readers may remember an inconsequential piece of fiction the DWC published last summer about the Twelfth Doctor visiting Alton Towers with Clara, designed to be part two of a two-part story. I have yet to write part one. Perhaps when the next book is finished.

But Alton Towers is the sort of place I really wish they’d visit on TV – all fountains and forestry and crumbling ruins amidst the thrill rides, creating a perfect backdrop for a story that preferably isn’t Nightmare in Silver. A wide panoramic opening shot of the central concourse, with alien spacecraft hovering over the lawn? A sinister bait-and-chase in CBeebies Land with a violent, red-eyed Makka Pakka raising havoc near the Postman Pat queue? Malevolent sea creatures lurking in the waters of the Congo River Rapids? Throw in a few Zygons and you’ve got yourself a winner. Presumably the only reason they haven’t gone is because it’s basically advertising. It’s a shame; I’d like to see Graham coming out of Nemesis looking like he’s about to vomit up that sandwich he was carrying, while the Doctor gets fed up at having her height constantly checked.

All of which brings us to a couple of weeks ago, when we’re shuffling through the Dark Forest on our way to the Woodcutter’s restaurant when an idea hits me.”Phil,” I say, over Messenger, “you remember when I did an article for you asking what biscuits each Doctor would be if they were a biscuit? Can I do the same thing with Alton Towers rides? I mean it’s a teeny bit niche, but everyone’s heard of The Smiler, right?”

An incredulous Phil replies “There’s a ride named after those things from The Beast Below?”

Here you are. No apologies for the silliness that follows. I’ll be blunt: some of this has frankly been a bit of a stretch, but that’s not a bad thing, because I haven’t done any yoga all summer. Well, except when I’m standing in a queue.

Old, creaky and technically primitive, but still extremely popular and imbibed with a unique personality. Includes its own Western town mockup, which is largely unconvincing.

Iconic and groundbreaking, establishing a template for future innovations. Sadly, there’s not much of it left, although the bits that haven’t been sold on eBay are probably languishing in a skip somewhere.

Very much ground-based, but a firm favourite because there’s nothing else in the park quite like it. Visitors get the opportunity to shoot at horned demons and some gargantuan spiders. Ostensibly in a hidden and secluded location that’s actually heavily signposted.

This was nearly the Third Doctor, largely because of the garishly patterned floor near the exit. Still, Tom Baker really was a much better fit, largely because the Smiler is prone to inane grinning at inopportune moments. It’s also excessively curly, hangs around for ages, and there’s heaps of merchandise.

Retro, slightly clunky feel with an appealing soundtrack. Frequently populated by surly teenagers who don’t really want to be there. Had a Sonic, but lost it years ago.

Two stops and that’s your lot. Comes in a rather garish colour scheme. Fun while it lasts, but has a tendency to break down mid run.

Saddled with a confusing beginning that no one really understands, and an awful lot of girlish screaming in the early parts. Eventually levels out but finishes before you’ve really got used to it. Brake squealing sounds a little like Courtney Pine.

Much-hyped but fairly pointless. Soars momentarily to stratospheric heights and then plunges into a black hole, only to briefly reappear some time later.

Sits on top of a former Roald Dahl exhibit, essentially rewriting the ending. Participants get caught up in dingy underground storage rooms, cells that aren’t really barred, and jokes about penis length. Debate rages: is it actually a ride, or not?

Long wait times until you can actually get on and doesn’t last quite long enough. Outwardly quite slick, but frequent technical issues and turbulent loading hint at trouble behind the scenes. Down the far end of the park, so people do tend to skip it.

Reddish-brownish but not quite ginger. An established fan favourite. Occasionally intense and can induce nausea. Has a little shop at the end, and a slightly crap alternate version in a parallel dimension.

Creepy statues, nursery rhymes, and surprise twists. Launched in 2010. Oh, and if we’re counting properly, Thirteen is more or less his actual number.

No longer the most recent addition to the park but still incredibly popular. Scottish, rickety, and sometimes uncomfortable, presenting modern riffs on an established classic. Within shouting distance of Runaway Mine Train, separated only by a river.

Hyped beyond belief but associated with controversial and divisive author who seems to be hated by just about everyone on Twitter. Slick and visually impressive with strong feminist overtones. Cancer storyline awkwardly and conveniently sidestepped. Delayed arrival owing to a global pandemic. Still, the kids love it.

Right, off you pop. Home time. Come back when you’ve stopped feeling sick. Do leave us good feedback on Google Reviews.

Carnival of Monsters: Doctor Who Does Alton Towers Rides 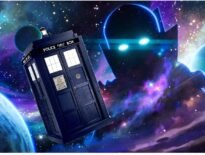 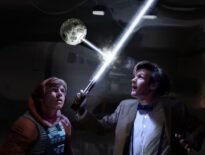